The Search for Deeper Knowledge

"Money is one thing, but it will not suffice to keep me alive in such a hostile environment. I also need to tap the wealth of knowledge of the inhabitants, who know this savage country like the back of their hand..."

Mary gazes across the savannah. Ahead, a small village lies huddled in a shallow valley amongst acacia trees. Her contact at Luanda had told her that the village was locally renowned for the wisdom of its elders. 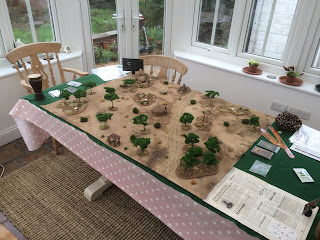 A witchdoctor lives on the outskirts of the village. 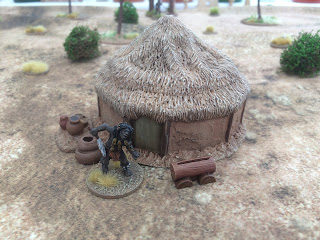 Nearby, a blacksmith cuts wood and fires up the village forge... 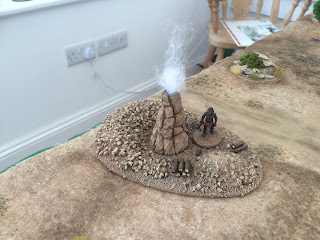 ... while a hunter guards against lions from his lookout post. 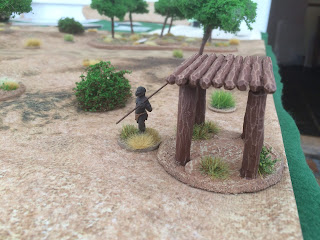 Mary was hopeful that with a little gentle persuasion, these wise men would gift her their knowledge.

In the darkness Mary assembles her expedition and breaks camp, hoping to reach the village by first light. 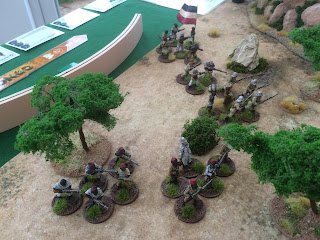 On the opposite side of the valley, Ujuwa also studies the village. Those old fools needed to be silenced and unfortunately for the village occupants, Ujuwa's ideas about persuasion lack Mary's subtlety. 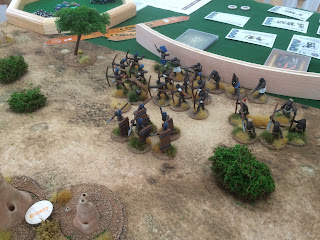 [At the start of this game two of Ujuwa's groups had stress tokens due to circling vultures seen whilst travelling by fast water.]

Despite the darkness and stress be damned, Ujuwa orders his men to pick up the pace and advance swiftly towards the village. 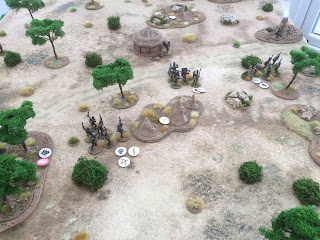 His Pygmies head into a thicket of acacia where they discover the remains of a zebra. Tasty.

[There are 6 Discovery markers in various pieces of terrain. All are randomly placed and turned face down. Four markers represent beneficial discoveries whilst two are cursed.] 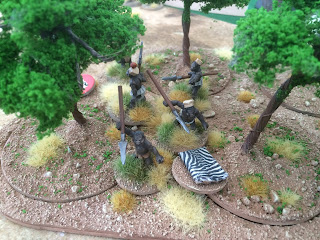 Mary's party are more cautious in their approach. A group of Trained Askari clamber between rocks and termite mounds only to be assailed by a tribal chief pleading for help to heal his sick wife. Unfortunately her wounds are deep.

[To heal her they must discard a valuable totem card.]

[Ujuwa swaps stress tokens between one of his groups and the Trained Askari, leaving them panicked.] 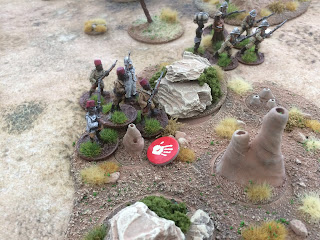 By now Ujuwa's Warriors have reached the witchdoctor's hut and as the sun rises across the vast plain, they smash their way in dragging the old man out into the morning chill. 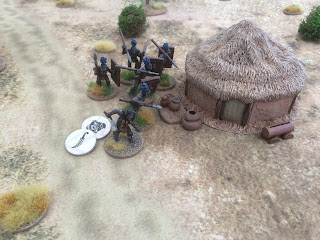 Mary hears the commotion and rushes towards the village furnace. She pleads with the blacksmith that for his own safety he should accompany her. Hearing the shriek of terror from the nearby hut, the blacksmith quickly agrees. 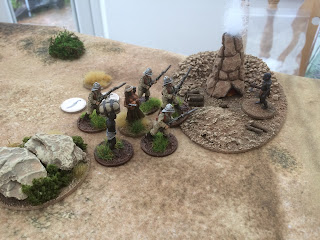 Another of Mary's groups explores a kopje and spy a discovery token. What could it be? 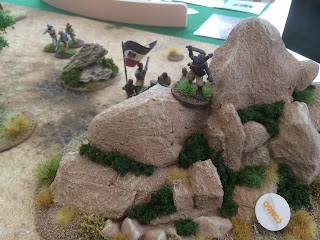 Not what they were hoping for! The Askari sense the presence of evil magic...

[The group are attacked by a 3D6 Wild Hunt Ritual. That's now both of the cursed tokens - Mary is starting to feel that her luck has deserted her...]

... but their luck turns and they manage to escape unscathed.

Mary can see Ujuwa and his hunters approaching the forge. Her soldiers fire a volley of shots and two of Ujuwa's group drop to the ground dead! 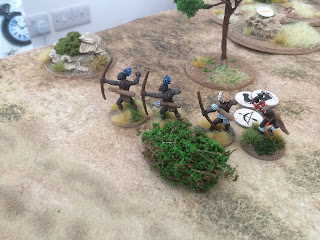 Arrows fly in return and a soldier staggers back, mortally wounded.

The firefight continues and another of Ujuwa's Hunters is slain. That last shot whizzed a bit too close to Ujuwa's ear for his liking, so leaving the village assault to those of a less sensitive dispossession, he retreats back towards a group of rocks. 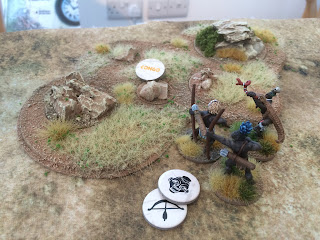 Exhausted by their efforts, Mary and her Soldiers stagger away from the forge. 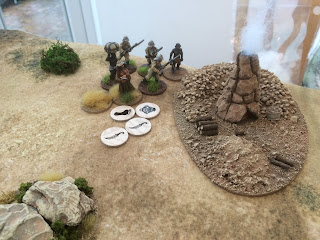 Seeing the danger, both groups of Askari rush to her aid. 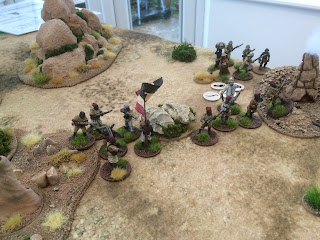 Where they form a defensive wall.

Opposing them stand Warriors and Bundukis. 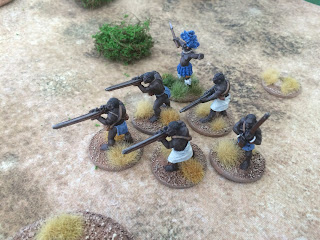 The odds don't appear too favourable for Ujuwa. Regardless, the Bundukis fire... 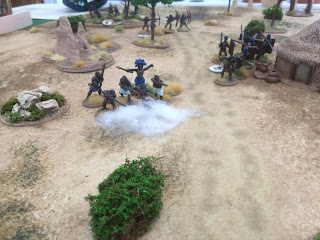 The muskets deafen everyone stood around, but as the smoke clears the Askari pat themselves down and look around relieved to find everything still intact!

The Askaris raise their rifles in return... 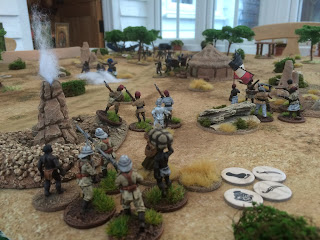 Thwarted by the cowardly use of overwhelming firepower, the Warriors and Archers head towards the lookout post, leaving the Bundukis to guard against a possible assault on Ujuwa.

Ujuwa rummages amongst the rocks and discovers the largest magic mushrooms he has ever seen! These will definitely come in useful... 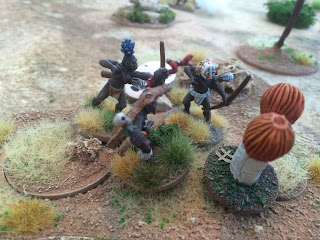 Under a hail of bullets, the Bundukis retreat from the firefight and find themselves amongst a group of termite hills where they discover a hoard of Ritual Objects. 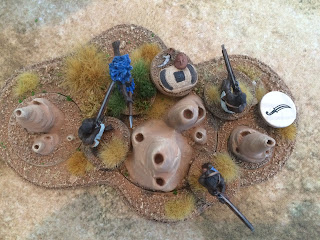 On the other side of the village, Mary's Ruga Ruga are the first to reach the lookout post and are less than sympathetic in their persuasion. Without argument, the village hunter joins them. 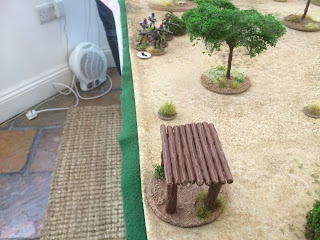 Suddenly, cackling can be heard from a copse of Acacia. Hyenas have arrived! 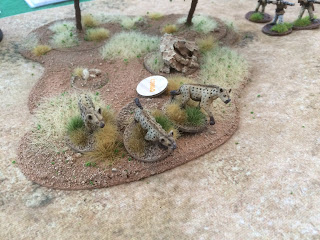 [It's the start of turn 4. Since the hyenas have not yet come into play they are placed on the board by the player with the most stress tokens - Ujuwa!]

The hyenas stand between the Ruga Ruga and safety. 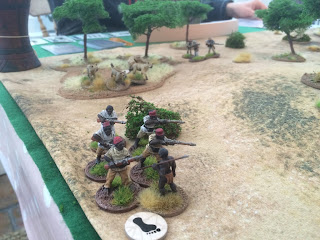 Comes the cry from Mary's Adventurers, who have remained skulking in the background for much of the game. Taking aim they fire, dispatching two of the hyenas.

The remaining hyena lunges towards the Ruga Ruga, but is fended off. Hyenas behind and Ujuwa's Archers ahead! The situation unnerves the Ruga Ruga who start to panic. 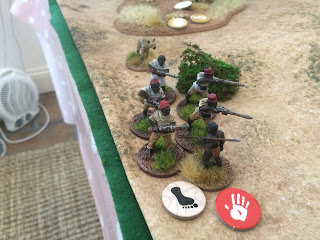 A flurry of arrows cuts down the Ruga Ruga who are then promptly charged by the Archers. The surviving Ruga Ruga flees, leaving behind his 'guest'.

Meanwhile, the Adventurers head into the Acacia copse and along with the two slain hyena pelts, they discover a cache of valuable minerals. 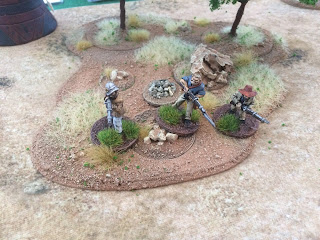 Seeing the glittering stones, the Warriors rush towards the Adventurers and brandishing their spears they charge! 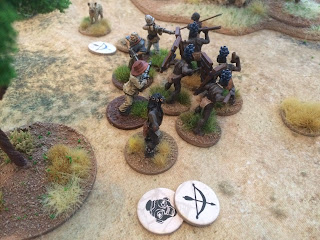 The Adventurers are beaten back, leaving their loot behind. 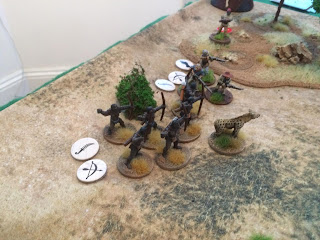 The hunter is rescued. Taking the initiative the Adventurers then fire at the Warriors leaving only two standing.

Enraged, Ujuwa's Warriors set upon the the Adventurers and force them to fall back into the woods.

As the distant roar of lions starts to herald nightfall, Ujuwa is in possession of two village wise men and four discoveries. Feeling rather battered, Mary looks on with a single wise man amongst her party.

The Adventurers prove to be stout of heart. 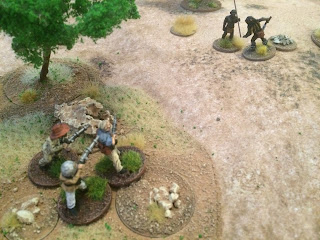 As the last rays of sunlight falls upon the Savannah, the Adventurers fire. 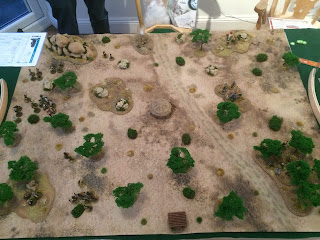 [At the start of turn 6, the player with the initiative rolls to determine whether the game ends. It does!]

Mary has a single wise man in her party earning her 4 vp. She also has 3 items of loot and rolls 3D6 for each, earning her another 4 vp for a total of 8 vp.

Ujuwa has captured no village wise men and gained no loot, but he has made 3 discoveries earning him a whopping 12 vps! In spite of himself and a rash failure to instruct his Warriors to go to ground when being shot at with 3D10 (hem...), Ujuwa appears to have won this Adventure!

For Mary, the adventure may have been lost, but she did prevent all of the wise men from coming to harm and the blacksmith gave her knowledge of African Customs. That may yet prove useful.

Desperate to keep the spirits happy, Ujuwa decides to travel once again over fast waters and this time, all is well. Ujuwa now has 10 Spiritual Link points.

Mary chooses to travel through thriving jungle, but becomes lost! Luckily only for a short time earning her an extra totem card at the start of the next adventure. But time draws on and Mary has now spent 10 months on her journey.

Mary has a hunting trophy and gained one domain of knowledge, but her accomplishment points are at risk of decreasing as the months go by.