It's been a while but time for a few updates on the painting front. First up, some very angry monks for SAGA... 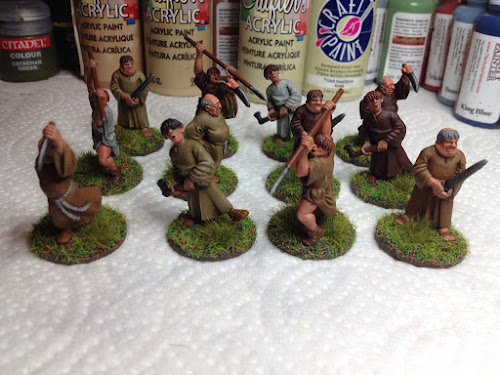 Along with a Warlord Priest. Upgrade, downgrade or sidegrade - you decide. 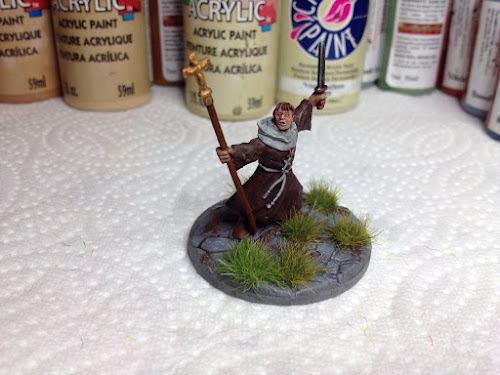 If your SAGA warlord isn't likely to see any melee, then the Warlord Priest can be a good option.

My Anglo Danes have been expanded and I now have an Anglo Saxon warband for SAGA. They may sound similar, but it's a whole different battleboard. 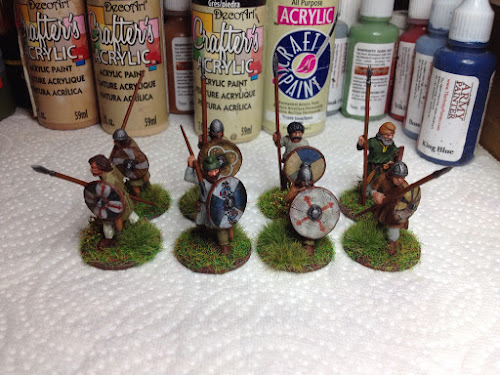 Another point of warriors, along with an Anglo Saxon warlord... 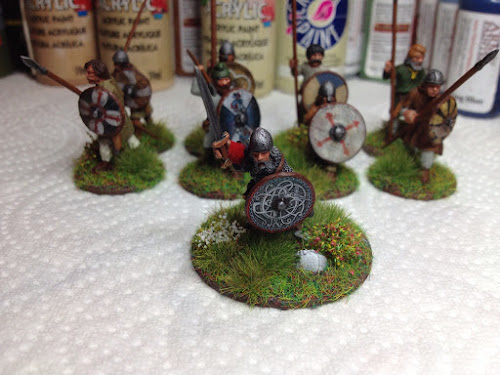 But... I recently bought an Athelstan figure, together with a standard bearer. In SAGA, Athelstan allows units to be upgraded to carry javelins, Dane axes or bows. So... The new warrior unit together with an existing AD warrior unit + Norse Gael Dane axe warriors + angry monks and of course the levy slingers of doom gives me a whole new Anglo Saxon warband! Here's the man himself... 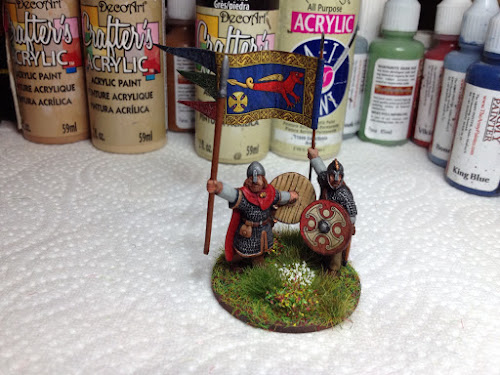 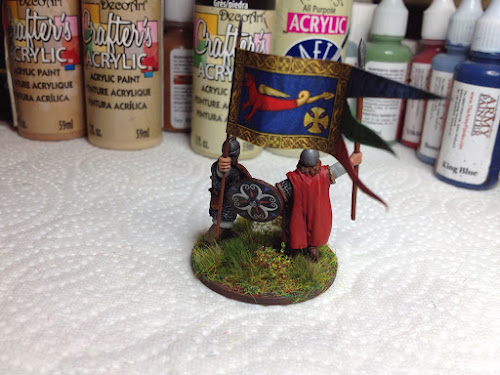 This is my first attempt at a banner for SAGA (LBM of course) and I'm pretty pleased with how it turned out. I decided not to weather the banner too much - it is after all the King's banner!

On Sunday the Friday Night Fire Fight Club held its first Hail Caesar Mega-Mashup. We arrived at our usual venue at 9.30 am and played a Roman (and allies) VS Macedonians (and allies) battle. Here's the table before the divisions were placed (we didn't have enough sheets of the same colour to cover the whole table - think of it as autumn!). 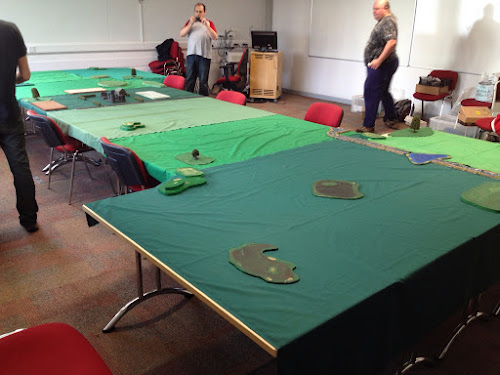 The game included 5 Roman divisions managed by three players fighting against 2 Macedonian divisions & 2 Late Egyptian divisions managed by four players. My Celts acted as Mercanaries and each general had to bid for their services (value from 1 to 20). The highest bidder won the services of the Celts, but the looser could take the winning bid and use each point spent to force their opponant to reroll one order per division per turn. The Romans won with a bid of 10. That meant the Macedonian General could force 10 orders rerolls.

Each general set their division up on opposing sides in the middle of our 14 foot long table, with Commanders rolling a d10 to determine where their forces were placed. 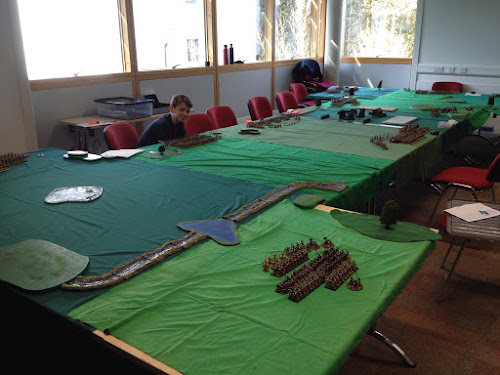 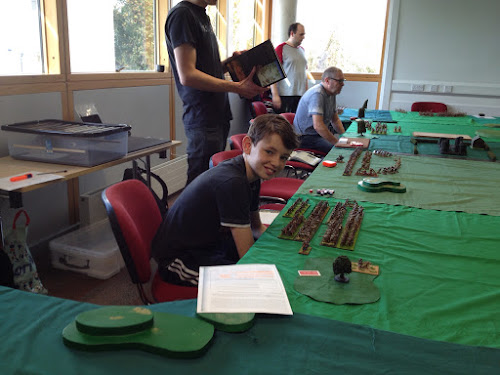 Mighty Kyle played a Roman division and ended up next to his general. Two other Roman units found themselves marooned at one end of the table with the Macedonians and Egyptians located near the other. And my Celts? Well, the Celts found themselves sandwiched between a division of Macedonians and a division of Egyptians - complete with elephants of course!

The Macedonian General used the order reroll to successfully keep the two isolated Roman units at bay. The Romans managed a maximum of one move per turn. Each time they rolled two or more moves, they were forced to reroll. This effectively kept them out of the game. The Macedonian general's division was broken by the two opposing Roman divisions (one played by Kyle). But another Roman division was broken by Egyptian heavy chariots.

As for my Celtic sandwich... 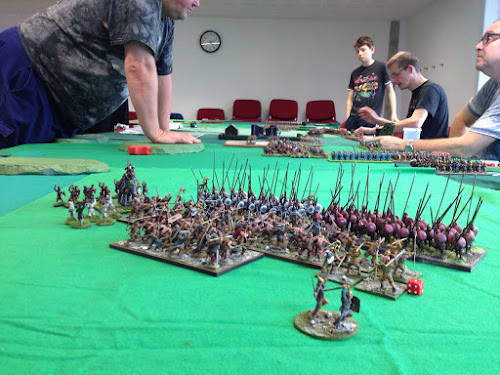 Towards the end of the game, things were starting to get a bit tight! A large Celt warband with supports found itself facing Macedonian pikes to the front whilst being charged by an Egyptian elephant to its left flank... But, the Celts managed to hold on, breaking the elephant and one unit of Macedonian pikes, leaving the remaining pike unit shattered.

At about this point the Egyptians realised their Macedonian paymasters might not deliver the goods (being one shattered unit away from total collapse), so decided to make off with the loot. As the two unscathed Roman divisions finally arrived at the battlefield the Egyptians had already legged it.

A really great game. The random placement of divisions ensured that things didn't go quite as expected. Introducing Celt Mercanaries spiced things up no end. On paper, the Romans clearly had the upper hand. But the two isolated divisions were effectively out of the fight. Whilst things didn't quite go to plan for the Macedonians, the Egyptians were happy to make off with the loot. I was just happy that my Celts didn't get completely squashed!

Just returned from a pleasant weekend away at Iron Bridge. Lots of historical interest, but not really wargaming related. Iron Bridge is a World Heritage Site due to its associations with the Industrial Revolution. The bridge and associated museums were interesting, but the kids were really there for the Halloween fun at Blist Hill... 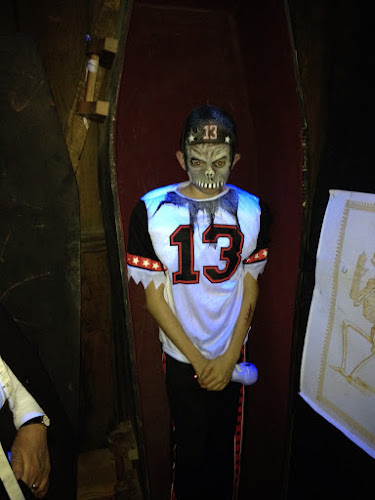 One thing caught my eye in The Museum of the Gorge. A 1/150 scale model of the River Seven and local 19th Century Industry. Photos don't really do it justice, but here's a taster. 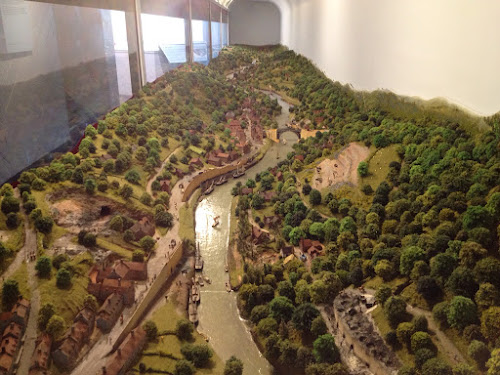 The sheer scale of the model was truly impressive. 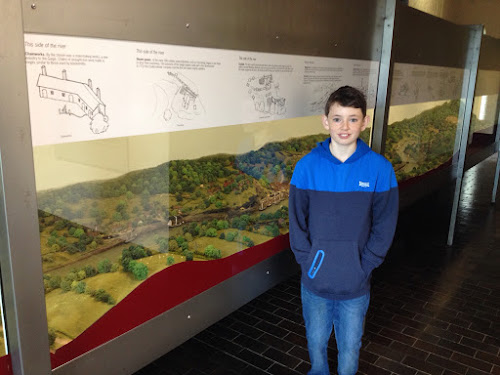 With an incredible attention to detail. 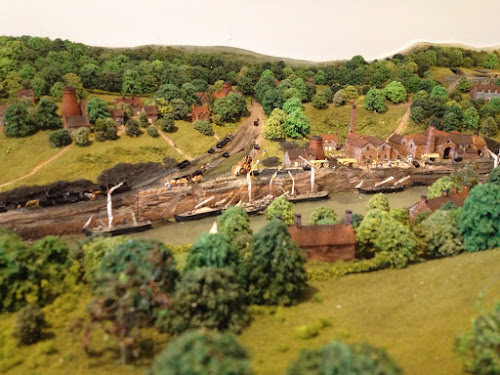 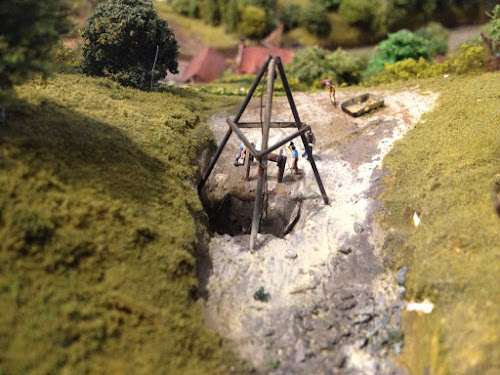 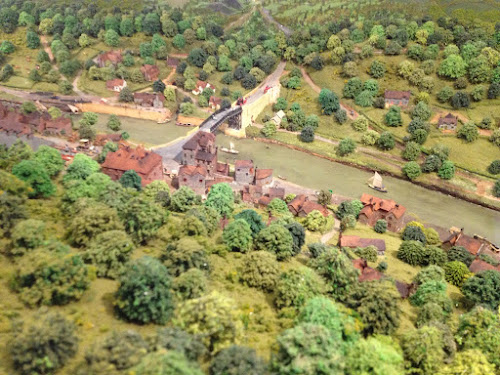 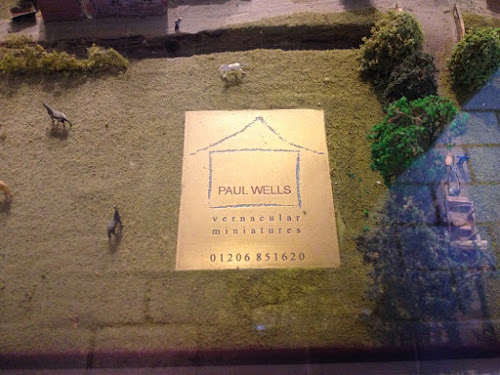 Time to pick up the paint brush and get back to those monks...