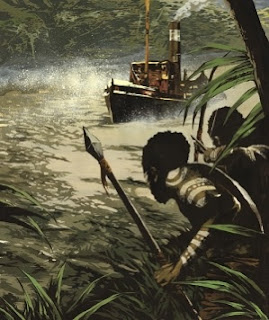 This page should help me to keep on top of my various book and magazine articles that include background information, terrain tutorials, scenarios etc for wargaming in Darkest Africa (in both historical and pulp settings). My current interest is the small to medium scale skirmishes and the information tends to be weighted in that direction. I will update the page as I come across new information. I've also included links to online posts that I've found useful or interesting. The list isn't exhaustive but please let me know if you think I have missed an important reference! I've checked that the urls are still working, but do let me know if you find a problem. I've deliberately not included links to battle reports, but may add links to some of my favourites at a later date.

The format is as follows:
Title (either actual title used in article or my summary)
Short description of content if appropriate
Game System(s)
Source (volume no.) pages
Clickable Link (for web content)

A key to abbreviations is at the foot of the page.
The list is now quite long so I have broken it down into what I hope a meaningful sections. Links to each section are below (working to make these active anchor links):
- Rules
- Rules Supplements/Additional Resources etc
- General Background Information
- People and Cultures
- Conflicts and Battles
- Scenarios
- Terrain Tutorials/Reviews/Inspiration
- Painting/Modifying Miniatures
- Reviews etc
- Websites/Blogs
- Alternative Settings
- Miniature Suppliers
- Terrain Suppliers
- Miscellaneous Stuff

[This isn't an exhaustive list of all the rules that are available, but includes rules that I either play or use as reference material. Always game to try something new though, so let me know if you think I've missed something. Another comprehensive list of rulesets is available on the British Empire Wargames site. ]


Hail Caesar
Mass combat rules published by Warlord Games. Bases typically include multiple figures although individually based figures can be used with sabot bases. Generally used for ancients wargaming, but have some use for non-colonial African battles.
https://store.warlordgames.com/collections/hail-caesar

In the Heart of Africa
Skirmish rules with good background information and a basic campaign system. I've borrowed many of the ideas for the campaign in my adaptation of Wilkinsons expedition for MWWBKs.
http://brigadegames.3dcartstores.com/In-The-Heart-of-Africa-19th-Century-Africa-Rules_p_1640.html

In Darkest Africa
Skirmish rules that are largely the same as the previous entry, but published by Wargames Illustrated over two issues.
WI (131) 50-55 & [incoming!]

Death in the Dark Continent
Follow up to In the Heart of Africa that includes rules for larger skirmish encounters. Very good background information and lists for multiple African peoples. My preferred ruleset for larger skirmishes when there is more time to set up a good looking table. I like these rules but there are only a limited number of scenarios in the main rule book. If armies are badly matched games can be very one sided even if they appear balanced on points (eg. armies built around warriors can be devastating when facing a skirmish based force). More scenarios would help to broaden the range of victory conditions.
http://www.northstarfigures.com/prod.php?prod=13551

The Men Who Would Be Kings
Medium to large skirmish rules that includes lists for Darkest Africa (amongst others). A great ruleset for small to medium skirmishes, especially when time is more limited. Includes several scenarios. Very entertaining to play.
https://ospreypublishing.com/the-men-who-would-be-kings

Congo
Small to medium skirmish rules from the publishers of SAGA. Games are scenario driven and my preferred ruleset for narrative play. A campaign system that focuses on Mary Kingsley's ascent of Mount Cameroon is also available.
http://www.studio-tomahawk.com/en/congo/

Man versus Beast: A Skirmish Game
Small skirmish rules for big game hunting. Included within the DitDC rulebook.
The Sword and the Flame
This is a ruleset that I haven’t yet played, but does appear to be popular in some quarters (particularly across the pond). I believe that an African supplement is available.
http://www.sergeants3.com/

The West Coast Chiefdoms
In Darkest Africa
WI (183) 22-23
Random Events in ‘Darkest Africa’
In The Heart of Africa
Lots of good ideas here. I’ve borrowed many of them and converted them into a format suitable for MWWBKs.
WI (196) 50-52

Tweaking TMWWBK
Official optional rules for Men Who Would be Kings. I've utilised several of these for my adaptation of Wilkinson's Campaign.
WI (349) 94-95

Tarzan (new column)
Congo
WI (349) 62-64
Drums Along the Watusi
'Back of a postcard' rules to solve problem of concealed native movement in colonial games.
Miniature Wargames (9) 35-36

[There is obviously a large amount of information available on Africa and the various colonial powers. I've tried to keep this list focussed to that information that is most useful for wargaming.]

Wargaming with the Matabele
http://nstarmagazine.com/africa_9_1.htm

Back to the Dark Continent. Two More Scenarios for 'Darkest Africa'.
Two quite contrasting scenarios by Chris Peers that include a small skirmish level battle along a path and a larger action along the banks of a river.
The Fight at Mouaou, 1866
The Battle of The Bua River, 1887
Both scenarios were devised for In the Heart of Africa, but easily adapted to other suitable rulesets.
WI (203) 34-39

Warfare in the Age of Exploration, 1855 - 1876 Part 1
Interesting and detailed background information on two instances when colonial invaders faced stiff opposition from native forces.
Night Attack at Berbera, April 1855 &
Mtagamoyo Versus the Pygmies, c. 1870
No specific ruleset specified, but ideas for creating scenarios are provided. Best suited to In Darkest Africa or DitDC, but could be adapted to other rulesets. The Night Attack scenario would benefit from a simple skirmish system similar to Blood Eagle.
WI (135) 49-55

Warfare in the Age of Exploration, 1855 - 1876 Part 2
Terrifically detailed background information on two instances when colonial invaders were outclassed by native forces.
Wilyankuru & Tabora, August 1871 &
The Retreat from Masindi, June 1872
No specific ruleset specified, but ideas for creating umpire controlled scenarios are provided. Best suited to In Darkest Africa or DitDC, but could be adapted to other rulesets.
WI (136) 40-45

Warfare in the Age of Exploration, 1855 - 1876 Part 3
More detailed background information this time detailing occasions when Stanley's well resourced expeditions encountered various mishaps.
Disaster at Vinyata, January 1875
Vinya-Njara, December 1876
Not specific to any ruleset, but ideas for In Darkest Africa are provided. Also suitable for DitDC, but could be adapted to other rulesets.
WI (137) 15-20

The Battle of Ngazia
Fictional battle fought as part of a campaign. Some good ideas for creating similar scenarios.
In the Heart of Africa. Also suitable for DitDC.
WI (179) 30-31

Wilkinsons Campaign Against the Slavers - 1881
Terrific little campaign that has a British expeditionary force travelling along a fictional river to stem the influence of local slavers.
As written the campaign is designed for In the Heart of Africa. Could easily be adapted for DitDC. I'm currently converting the campaign into something more suitable for MWWBKs. I'll post details on the blog when it's done (still underway but see here).
WI (270) 98-107

Swedes in the Heart of Darkness
Information on how Sweden provided men to serve King Leopold in the Congo. Includes two scenarios inspired by Lieutenant Arvid Wester and Leiutenant Edvard Gleerup from their time at the Stanley Fall station.
Cannibals in the Night - July 1884 &
Slave Raid - October 1884
Congo/MWWBKs
WSS (88) 16-21

Peril Beneath the Desert
A commercial supplement that includes two columns, a new scenario and terrain ideas for playing in Egyptian tombs. Worth a look but a little pricey for an unofficial pdf.
Congo
https://www.wargamevault.com/product/246757/Peril-Beneath-the-Desert-An-Unofficial-CONGO-Scenario

[I've included these additional scenarios since they represent other ways of playing games such as Congo. They could also be easily modified for use in Darkest Africa.]

Desert Terrain by Paepercuts
Paepercuts produces some of the best terrain tutorials on YouTube. The detail and effort involved means that they are probably more appropriate for dioramas rather than wargames. But they are still worth watching and I have certainly picked up some great tips. This video includes a feature that would make a fantastic watering hole.
https://www.youtube.com/watch?v=i2vSVAAae8k

The Kopjes of Serengeti
Not a terrain tutorial, but useful information with great photos.
https://www.amusingplanet.com/2014/09/the-kopjes-of-serengeti.html

Riverside Jungle Terrain - CONGO 1876, or "Another fine mess you got me into, Stanley..."
Article in Wargames Illustrated discussing a Darkest Africa game held at Partizan in 1998.
WI (131) 46-49

Various Jungle Terrain Including Trees and Orchids
Will definitely be having a go at some of these!
http://leadadventureforum.com/index.php?topic=41545.0

Colonial Flags
A sheet of colonial flags to print out.
https://adventuresinlead.blogspot.com/2019/10/the-petite-race-for-africa-colonial.html

[I follow many different blogs. Here are a few of my favourites that include material relevant to games set in Darkest Africa. I may also include links to specific posts elsewhere when appropriate. I recommend you visit each of these and explore the various posts.]

A Grab Bag of Games
https://agrabbagofgames.wordpress.com

Colgar6 and the Infinite Legion of Toy Soldiers
https://colgar6.blogspot.com

Diary of a Gaming Magpie
http://infrequentwargamer.blogspot.com

I Have Wrought My Simple Plan
http://ihavewroughtmysimpleplan.blogspot.com


Older Blogs That Don't Appear to be Updated Anymore

Return to Darkest Africa
Blog focussed on wargaming in Africa. Has not been updated recently, but still has many useful resources.
http://returntodarkestafrica.blogspot.com

Articles providing information on using rulesets primarily intended for wargaming in Africa in other settings.

Miniature Suppliers
[There are many companies that manufacture and/or supply miniatures for colonial wargaming. Although I will include more general suppliers, I will prioritise listing those that specifically include figures suitable for Darkest Africa, people and wildlife. This will include figures such as explorers and big game hunters that are also suitable to settings that are more pulp focussed. I tend to game with 25/28 mm figures, so that will also influence the companies listed. Being based in the UK, I will also prioritise companies that are EU based.]

Adrians Walls
Prepainted resin terrain that is of excellent quality. I have several dark age buildings from this range that I am very pleased with. I've just ordered an African village stockade. African huts are also available.
http://adrianswalls.co.uk

Monolith Designs
Great range of various resin African buildings, totems and canoes etc. I have several and they are perfect for games of Congo.
http://www.monolithdesigns.co.uk

Frontline Gaming
Resin Colonial buildings, explorer's camp and various African village items. I have several and after a clean up, the resin paints up very nicely. The explorer's camp recently featured in our Dino Safari game.
http://www.frontlinewargaming.co.uk

Hovels
Range of various resin North African buildings. I have recently bought some extra buildings to give more variety to my African villages. These are listed under Middle East on the website.
http://www.hovelsltd.co.uk

Wargames Terrain Workshop
Various resin African village items including huts, pots and fire. Terrain has featured in several games such as this game of Congo.
https://wargamesterrainworkshop.co.uk

Fenris Games
Pots and other items that are particularly useful for games set in Egypt.
https://fenrisgames.com/?/home.html

Bad Squiddo Games
Smaller resin items that provide useful objectives/scenery. I recently bought the lanterns to include as scenery on the explorer's table in our game of Dino Safari.
https://badsquiddogames.com

Stuff that doesn't quite fit anywhere else!

The Boer War in 3D
Fantastic collection of images on the 28mm Victorian Warfare Blog that are generated from two photographs. A little dizzying if you stare at it for too long though!
http://28mmvictorianwarfare.blogspot.com/p/boer-war.html

MWWBKs - Men Who Would Be Kings (rules)