The expedition has halted at Reverend Jenkins' mission station to await the arrival of the gunboat Mayfly with supplies and reinforcements. There has been some trouble with the local tribesmen recently, whipped up by Mwanga, a witchdoctor who believes that Jenkins is undermining his position with his magical medicines and foreign god. 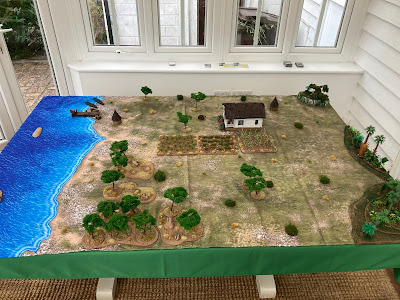 It's taken us a while, but following on from Swampland Outpost we are back with the next instalment of our thrilling campaign set in Darkest Africa. We were actually supposed to play in September, but things took an unexpected turn just after the British had deployed when the phone rang and the Commander in Chief reported that she had fallen and dislocated her shoulder!

Before deploying either field force, the Arabs produced a card with a gorilla icon that had been drawn in the previous game. 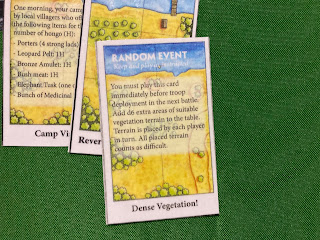 I rolled the die and got... a 1! Rummaging through the terrain box I chose another stand of acacia trees and placed these near the river.

Whilst Wilkinson says his goodbyes to Miss Jenkins, there is a cry from one of the scouts that the enemy has been spotted...

Fortunately for the expedition, repairs on the Mayfly were completed early and the gunboat starts the game steaming along the Bakambo towards Wilkinson's camp. 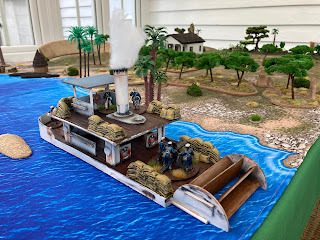 The gunboat is armed with a field gun and a machine gun. Along with various supplies, the gunboat also transports two units of sailors (regulars). Due to deep water, crocodiles and sand banks the gunboat can only unload at the jetty - providing it has not been captured by the enemy. 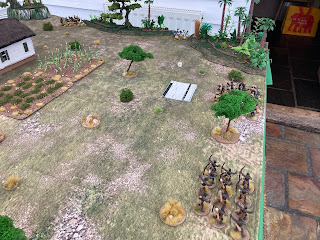 The Arab slavers are led by Sefu who commands a half strength unit of well-armed Zanzibari. Unfortunately for Sefu, the Zanzibari are not proficient in the use of modern rifles. Accompanying the Zanzibari are two full strength units of wangwana free-men and two units of porters. The Arabs deploy from random locations along the northern table edge and emerge from between pockets of jungle. To the east Sefu has coaxed the local witchdoctor to attack the mission with three tribal units (archers and spearmen). 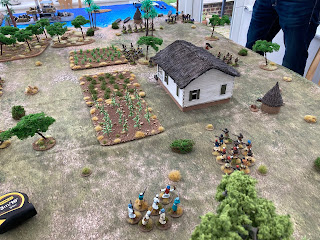 Seeing the approaching gunboat, Sefu didn't waste any time and urged his men towards the mission where they immediately got to work starting a fire.

Meanwhile the tribal units tried to put some cover between themselves and Mayfly's guns. 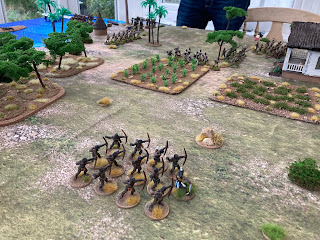 Wilkinson saw the enemy rush towards the mission building and paused. Could the building be saved? Once the roof was ablaze it would not be possible to extinguish the fire whilst under enemy fire. As Father Jenkins staggered from the building with terror in his eyes, Wilkinson made his decision. 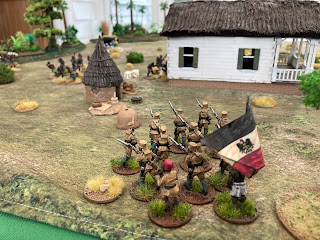 His well-armed Askari moved into position and fired on the wangwana, pinning the enemy and forcing a retreat. The mission building may yet be saved! 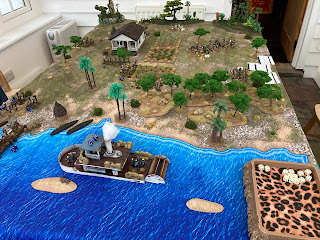 Whilst gunfire rang out in the distance, the Mayfly's crew stoked the engine and the gunboat steamed upriver towards the jetty. Suddenly the captain saw tribal archers advancing through nearby acacia so he brought the boat to a halt and ordered his guns to open fire. 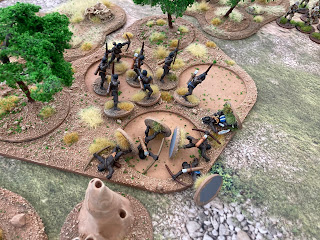 After coming under fire from Wilkinson's regulars, the unit of tribal archers had run for the cover of the trees. Unfortunately they found no respite as the Mayfly trained her guns on them. Under a hail of fire from the boat's guns, the archers were cut down to a man. Mwanga would not be returning to his witchdoctor's hut that evening. 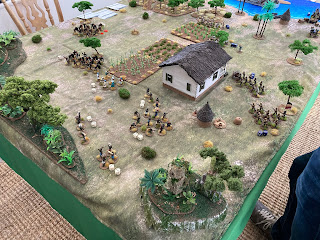 The remaining two units of tribal spearmen decided that it might be better to avoid the gunboat and ran towards the nearby cornfields. All the while under fire from Wilkinson's men. 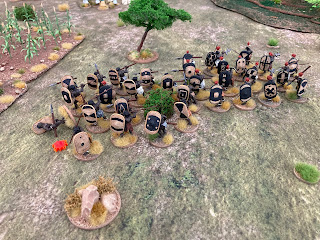 After taking a casualty one unit of spearmen dived to the ground in panic and were pinned. These spearmen never managed to regain their nerve and failed to Rally, eventually fleeing the battlefield and running back to their village. 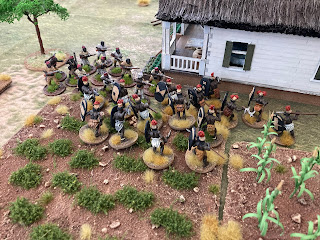 The remaining spearmen found their courage and rushed through the corn and threw themselves upon a unit of Askari that were advancing alongside the mission. Despite their best efforts, the spearmen only managed to fell two of the Askari. The Askari were pushed back, but kept their resolve and stood their ground unpinned. Wilkinson's regulars then opened fire and the spearmen's courage deserted them. After repeated bouts of gunfire from both the regulars and Askari, the spearmen fled back across the cornfields. 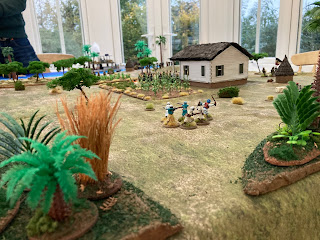 Meanwhile Sefu exchanged fire with the well-armed Askari. Although several Askari were killed, Sefu found himself outgunned. Seeing his wangwana cut down and the tribal spearmen running for home, Sefu decided to protect his baggage and retreat from the field of battle. 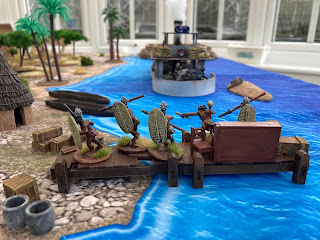 As the Mayfly approached the jetty, Wilkinson's porters looked on. It had all been rather entertaining... 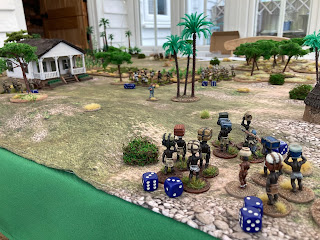 All of the surviving slavers fled the battlefield. Fortunately Sefu and his baggage did manage to survive meaning he will be available as a leader in the final defence of the tembe. Sefu's men inflicted few casualties on the expedition so no VP were awarded for destroying enemy units. Since Mwanga had been killed, the Arabs suffered a -4 penalty and the slavers therefore gained a total of -4 VP. Not a result to boast about!

Wilkinson managed to keep Father Jenkins and his daughter safe whilst preventing the mission from being destroyed and defending the jetty (4 vp). He also destroyed 3 enemy units (6 vp) and therefore gained a total of 10 vp. A thumping victory!  After the post battle roll Wilkinson found he had lost 2 irregular Askari and 3 well-armed Askari. Since the jetty was secure, Wilkinson was able to resupply the expedition with two units of regulars together with extra ammunition and rations. But Wilkinson was surprised to find that the extra unit of porters he had been expecting to help carry the supplies was not present. In their place was a group of men carrying optical apparatus. They are apparently hoping to make a film about the Dark Continent...

At the start of Campaign Turn 3 Wilkinson drew the following cards: 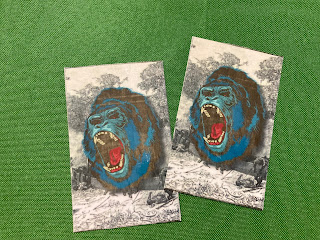 Cards with a gorilla icon are given to the Arab player to be read in secret. After drawing a third card, Wilkinson discovered that the next destination for his expedition along the Bakambo would be the Wasimba Village. 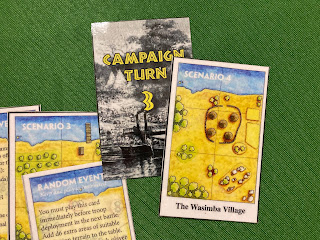 Wilkinson has gained 2 CPs for winning two scenarios To this are added 3 CPs for safely delivering Miss Jenkins to her father's mission. The carved bone may also earn him an extra CP if it is still in his possession at the end of the campaign.