Godwinsons on the Paint Table

Of course if I'm going to undertake a SAGA based retelling of the monumental events of 1066, I will need to fill out my Anglo Danish force... 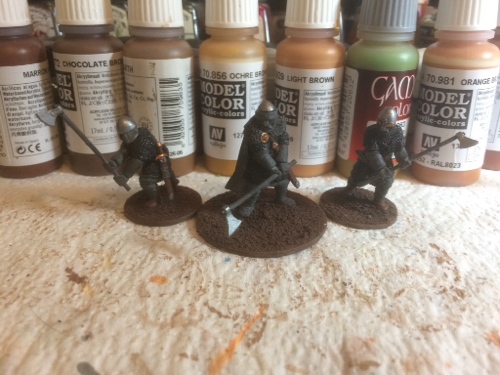 A small English force stands on a low hill in the marshes. Will their shieldwall be enough to stop the invading Vikings from sacking the City of York...

When Edward the Confessor died on 5 January 1066, Harold Godwinson rushed to London to be crowned king. But others also desired the crown, not least his outlawed brother Tostig. Tostig and his Flemish mercenaries fled to Norway and convinced Harald Hardrada to sail to England and restore Cnut's Viking lineage to the throne. The Vikings sailed into the Humber estuary before turning north up the River Ouse. Leaving their fleet at Riccall, Harald and Tostig travelled overland to Fulford, just outside York.

The earls Edwin of Mercia and his brother Morcar of Northumberland were expert tacticians and after rallying the local fyrd they gathered their forces to defend the city of York. Rather than risk the city being sacked, they set up their defences on a low ridge in a nearby marsh.

Meanwhile, across the English Channel William was also gathering his forces, but the northerly winds that had helped Harald were now hindering his own invasion plans.

No other Sword for Hire units are permitted.

All terrain is placed by the attacking force.

A small or medium marsh is placed between the two fords with one side touching the northern bank of Germany Beck (D).

A low hill (standard elevation) with a length that should exceed L and a width that must not exceed L is placed with one side touching the northern edge of the small marsh (E).

A small or medium marsh is placed opposite the major ford, touching the northern edge of the hill (F).

A small or medium marsh is placed opposite the minor ford, touching the northern edge of the hill (G).

No other items of terrain are placed. 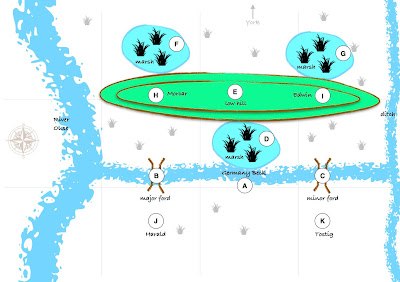 Morcar is placed on the hill opposite the major ford (H).

Edwin is placed on the hill opposite the minor ford (I).

The defending force then deploys their remaining units with as many figures as possible located within L of their respective Warlord. No figures may be placed within S of Germany Beck or either ford.

After the defenders have deployed, Harald is placed on the southern side of Germany Beck between S and L of the major ford (J).

Each attacking warband then deploys half of its remaining units with as many figures as possible located within L of their respective Warlord. No figures may be placed within S of Germany Beck or either ford.

Remaining units are deployed along the attacking force's table edge at the start of turn 2. If available space prevents units being placed, they should be deployed at the beginning of the next turn as appropriate.

Length of Game and Special Rules

The game immediately ends if both Morcar and Edwin are killed. Otherwise the game continues for 7 turns.


Germany Beck
Germany Beck is only passable at the two fords. Local tides mean that the fords may become marshy or even impassable.

At high tide all flat ground not otherwise identified as terrain becomes boggy with movement restricted to S.

At the start of each game turn, any figures stood in impassable terrain are immediately removed as casualties.

Marshes
Any unit ending its movement with at least one figure in a marsh (including flooded fords) immediately receives 1 fatigue. At high tide, units must also roll 1d6 for each figure in the unit. One casualty is removed for each result less than the unit's armour value.

Order of Play
The defending force has the first turn.

The attacking force may not roll any SAGA defence dice.

At the end of the game both forces earn victory points (vp) as follows:


Anglo Dane Major Victory
Either Morcar or Edwin remain alive and both Harald Hardrada and Tostig are killed. The small English force has crushed the Viking invasion and Harold Godwinson is free to confront William at Hastings without the burden of first engaging in battle at Stamford Bridge. Harold's army is not subject to the fatigue special rule at Hastings.

Anglo Dane Minor Victory
Either Morcar or Edwin remain alive and the defenders score more victory points than the attackers. The Viking invasion has been repelled. Caught between the northern shieldwall and Harold Godwinson's marching army, the Northmen flee back to their ships. Harold does not loose men in battle at Stamford Bridge, but his army is still subject to the fatigue special rule at Hastings.

Viking Major Victory
Harald Hardrada and Tostig remain alive, Morcar and Edwin are killed and the attackers score more victory points than the defenders. Triumphant, the Vikings regroup and then march on York but instead of sacking the city they agree to receive hostages at Stamford Bridge.

Viking Minor Victory
Harald Hardrada or Tostig remain alive and the attackers score more victory points than the defenders. The Vikings forfeit their opportunity to regroup as they hastily march on York. Instead of attacking the city they agree to receive hostages at Stamford Bridge.

Draw
Any other result is a draw. The Vikings forfeit their opportunity to regroup as they hastily march on York and rather than risking further casualties they agree to receive hostages at Stamford Bridge

If the Vikings march on York they are subject to the following special rules:

Warlords 'killed' during the game are only injured. They automatically start the next game with 1 fatigue and always fight with 1 less die in melee (to a minimum of 1 die).

Other troop casualties follow the rules described in Age of the Wolf.

If the Vikings achieved a Major Victory each warband may immediately recruit 1 hearthguard, 2 warriors and 3 levy. Where possible, these figures must be added to an existing unit (following normal rules for equipment and maximum unit size). If no suitable units are available the recruits return to their longships and are not added to the Viking force.


UPDATE
Initial playtesting revealed that canny Viking players had no real incentive to fully engage the Anglo Danes. Fighting would result in loss of men (including potentially both warlords) and since the Viking players know they have to face Harold at Stamford Bridge this could result in a rather gamey situation that makes for a very dull battle.

I've therefore modified the victory conditions to ensure that in order for the Vikings to progress in the campaign they must not be defeated by the Anglo Danes.

The low ridge on the marsh was a strategic feature on the battlefield. Therefore, as well as earning slaughtering points for killing enemy troops, both warbands also earn points for occupying the hill at the end of the game.

At the beginning of the game, the Anglo Danes will be in control of the hill. The Vikings must therefore attack if they are to have any chance of winning. A minor victory for the Vikings will see them get to Stamford Bridge, but they will need to achieve a Major Victory if they are to recruit troops from their longship.

With this change in mind I have also decided to make the previous Optional Deployment Rule the default. The Anglo Danes now have the first turn and the Vikings roll no SAGA defence dice. But if the Anglo Danes move off the hill to attack a weakened enemy that is not fully deployed, they may be risking losing men and victory points for not better defending the hill. Decisions, decisions...

After a great game of SAGA at the club a couple of Fridays back, we thought it would be fun to play The Battle of Hastings, SAGA style. Perhaps rashly I offered to put together a scenario for both Hastings and Stamford Bridge. Well one thing leads to another and once I got the bit between my teeth I thought I might as well do Fulford Gate as well!

The three scenarios are now written and play testing will begin soon. I've used the excellent As Told in the Great Hall as the main source of information for each scenario. This book offers background information, battlefield plans and orders of battle that proved quite easy to adapt for SAGA. 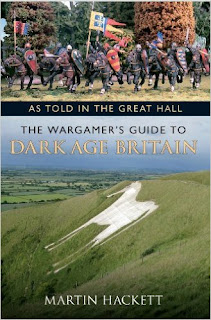 The overall design consideration for the campaign is to make the games, whether players win or lose,  fun. Each scenario is based on the three real battles, with specific elements added to warband composition, deployment and special rules. All of which should introduce a little spice. Each game is intended to be played as a two vs two player game. This ensures there are common (and sometimes conflicting) objectives for players to achieve and ensures the games are more 'social' and less competitive than standard 1 vs 1 player games. Here's a summary of what I aim to achieve for each scenario:

Fulford Gate
A smaller Anglo Danish force has a defensive position on a low hill in the marshes. A larger Viking force must negotiate local tides to cross fords and achieve victory before nightfall.

Stamford Bridge
An unarmoured Viking force is camped awaiting arrival of hostages and caught unawares by a fully armoured Anglo Dane force. Viking reinforcements are on the way. A lone Viking champion stands on a bridge. Can he hold back the attackers long enough for his companions to mount an effective defence?

Hastings
A fatigued and somewhat depleted Anglo Danish force stands on a hill facing Normans (and Bretons if figures available). A trickle of Anglo Dane reinforcements arrive as the battle progresses. The Normans must secure victory before the trickle becomes a flood. If Vikings manage to win at Stamford Bridge they may play this battle, but each Viking warlord should remember that there can only be one King of England.