Dan and I met up earlier this week to get the campaign up and running. There was some campaign admin to get through, but we now have the Campaign Deck built. Wilkinson has equipped his expedition and agreed to escort Miss Jenkins to her father's Mission (we will use the escorted lady rules for Miss Jenkins). 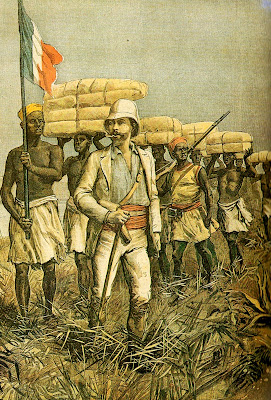 Wilkinson has three baggage units allowing him to carry 12 objects. He chose to take the following supplies:

After electing not to barter with local villagers at his base camp, Wilkinson headed off along the River Bakambo. In Campaign Turn 1 Wilkinson encounters the Swampland Outpost.

Not sure we will get this game played before November(!) but stay tuned!

A full contents for the campaign can be found here.