Only a quick post about Salute. Big Kyle and I had a great time - apart from the awful lighting.... my poor eyes!

Since we went with friends (who are new to all this wargame malarkey), I had decided to pre-order most of my loot. This ensured I picked up the things I was really after. We did have a look around, but to be honest we didn't spend as much time as usual gawking at the lovely tables - so no photos I'm afraid. Instead, I decided the best thing was to get down to the lardies and have a good crack at What a Tanker! I nicked this photo off the lardies Facebook page. Something had obviously tickled me... 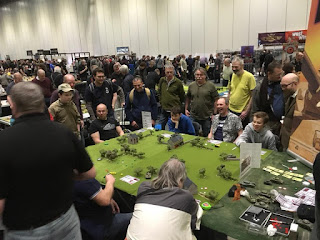 Don't let Kyle's appearance fool you, we both really enjoyed playing the game and listening to Rich's attempts at wit ;-) It's a simple tank vs tank game. No massive historical complexity, just tanks on the table going at each other. And you know what? Sometimes we all need to play a simple game like that, so definitely a thumbs up from me. Will I play it week in week out? No, but its light and fun and has encouraged me to finally get my years old early German armour painted. More on that another time.

Enough about the lardies, here's the loot. 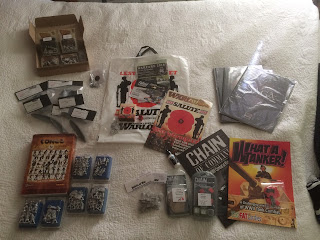 If you look carefully you'll see quite a bit of Darkest Africa figures, canoes, burn huts (and even an explorer wondering why he's sat in a pot). I also splashed out on the new SAGA rules. Not had chance to read them yet though. Of course, I did pre-order What a Tanker but also decided to give Chain of Command a go. Looks like a platoon level game that is similar to Bolt Action, but perhaps offers more interesting command and control options. Hoping for a game next week so we'll see.

Email ThisBlogThis!Share to TwitterShare to FacebookShare to Pinterest
Labels: Salute, What a Tanker!

I've played several Savannah based Congo adventures but it was now time to head into the Jungle! So on Saturday I played Escalation Along the Nziari with Dan, one of my friends from Friday Night Firefight Club. 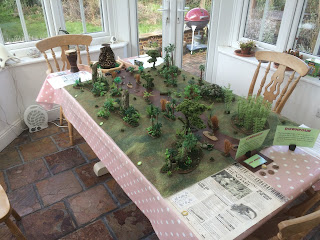 Two White Men columns face each other on opposite sides of the crocodile infested Nziari River. Looks like there are also a number of hippos in the murky waters. 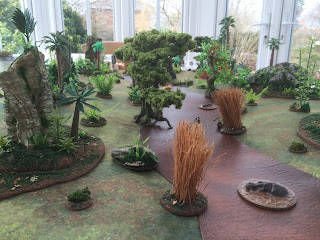 This scenario requires the two columns to claim territory by capturing three flags (strategically positioned on sand banks in the river) and carrying them off the opposite table edge. 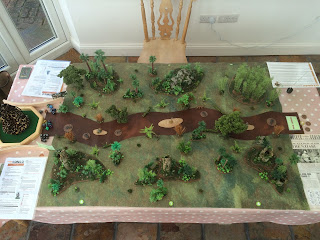 Professor Smut was joined by the famed explorer Big Gun Johnson. On the opposite side of the River, the Retired Officer Banks was joined by some foolhardy journalist who decided to lug his precious camera gear through the jungle. 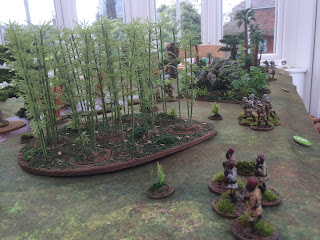 The Retired Officer was of German decent and was accompanied by a number of adventurers, soldiers, trained askari and rugga rugga. The English scientist had less funds available for his expedition and hired mostly askaris and young warriors. He did have some adventurers, but they seemed loath to venture far into the jungle. 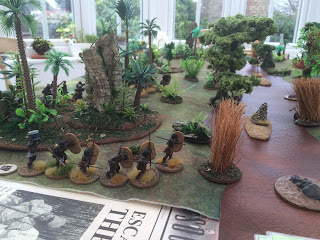 The English slogged their way to the river and started the game exhausted. This was cruelly exploited by the nefarious Germans who made all manner of strange bird calls and beat the buttresses of trees. This was too much for the Professor's askari, who repeatedly failed panic attacks. Professor Smut did persuade one group of askari to enter a particularly thick section of jungle and managed to find a specimen of particular interest... 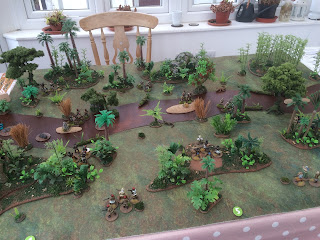 The Germans were much more steady in their approach and quickly acquired the flags. But only one group managed to emerge from the river before the commotion attracted the attention of the crocodiles. 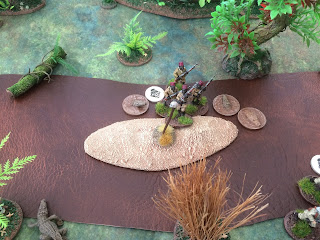 The German trained askari dragged themselves from the river, but found themselves isolated and the sound of gunshots rang out.  Falling like flies they were then assaulted by askari and died to a man. One of the flags was now in possession of the Professor's Askari! 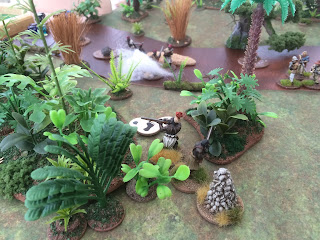 Unfortunately, they were somewhat depleted in numbers. Perhaps best to stay out of harms way!

More commotion on the other side of the river, heralded the appearance of a mighty ape. The gorilla set about the German adventurers who took a good thumping but managed to retired out of harms way. 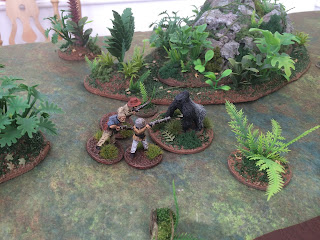 As the weather worsened and torrential downpours threatened to swell the river, the professor's askari and young warriors made one final push for a flag situated on the right flank. 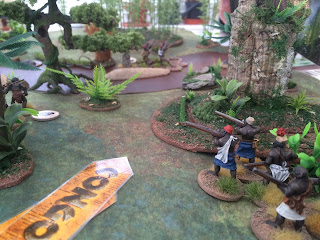 After a kerfuffle, they managed to capture it, but panicked at the thought of crocodiles and retreated from the river.

The professor urged them onwards and they were just about to scramble from the fearsome waters, when night descended and the jungle went eerily quiet... 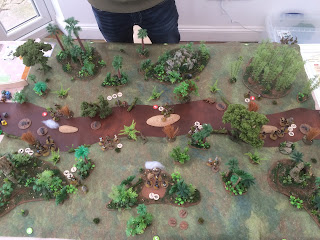 Banks eliminated one of the Professor's groups and killed a crocodile scoring 5 vp.

Smut also eliminated one group of enemy askari, disabled the journalist and found some loot for a total of 5 vp! Unfortunately one of the Professor's bearers took a stray bullet and 2 vp were lost.

Big thanks to Dan for a great game that was fun to play with the new terrain.