Baggy Trousers and a Rocky Outcrop

One point of hearthguard and a warlord left to complete. The target for completion was end of October and I believe I can now announce mission accomplished!

Four old Citadel figures that will form the last point of Norse Gael hearthguard. I particularly like the fellow on the left with the baggy trousers, painted yellow for extra effect. Rather than use Little Big Men transfers I once again tried a bit of freehand on the shields.

The bases have been completed with the same blend of spring/summer static grass. This time though I decided to only use grassy tufts (rather than heather). Although these figures were originally intended as Norse Gael, Kyle's use of a priest means that they now tip the warband over to 7 points. I therefore decided to finish them in a way that will blend in with a general Viking warband.

So, onto the the grande finale. Whither the warlord?

Here he is, stood atop a craggy rock formation. No free hand shield this time, back to Little Big Men...

Originally I had planned to paint his fur cloak grey. However, after completing the figure I realised the cloak blended in too much to the rocks. So I redid it white.

So there we have it. Six points (seven if we include the priest) of Norse Gaels, ready to join the Anglo Danes in next week's SAGA event at Canterbury. I'm hoping to give Kyle a couple of practice games with his new warband this weekend. Who knows, I may even get to write one up as a battle report.
Posted by Lee at 22:52 1 comment:

Here is the first completed unit of Norse Gael hearthguards. 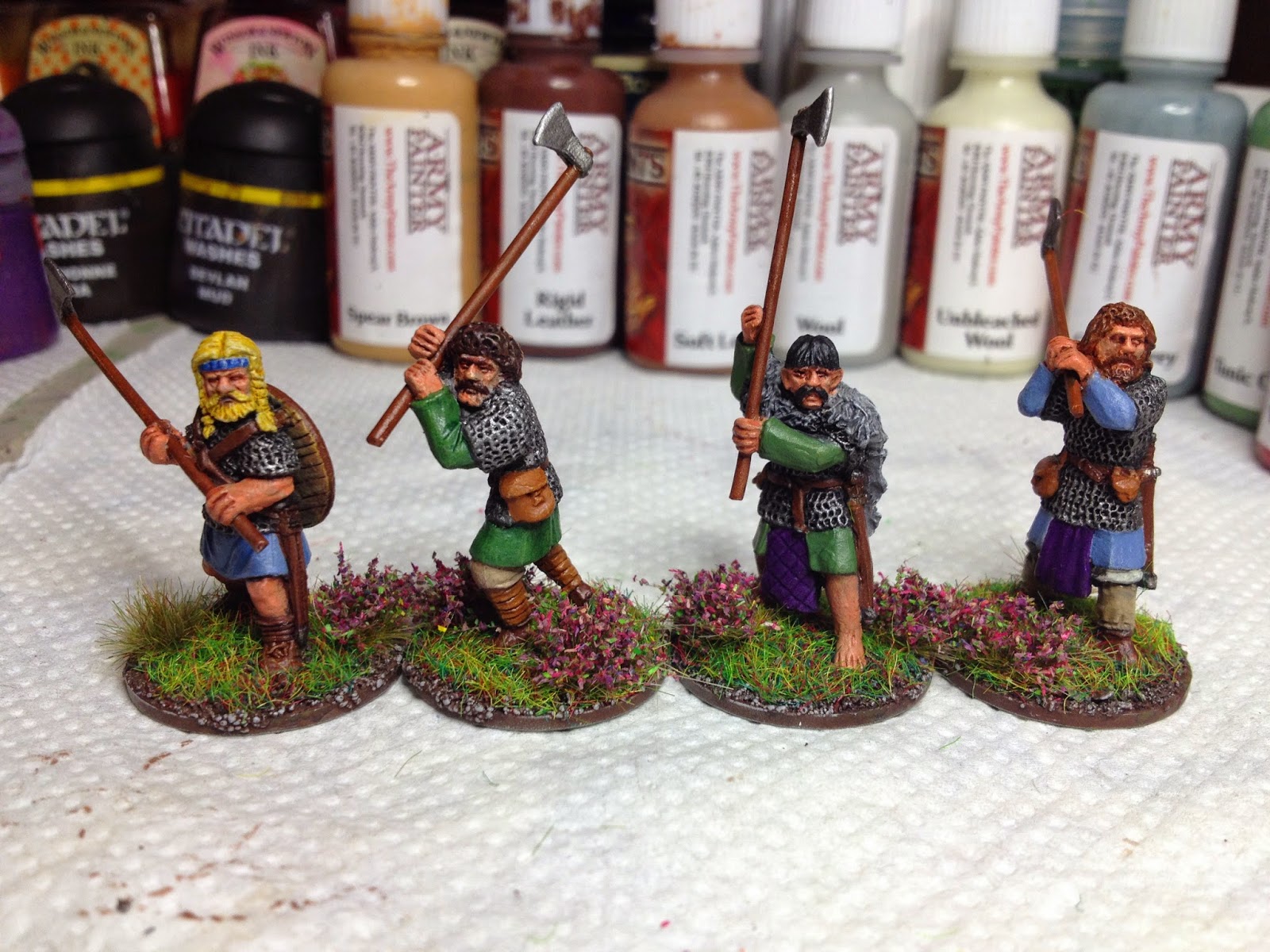 All figures are Gripping Beast with the shield transfer by Little Big Men. 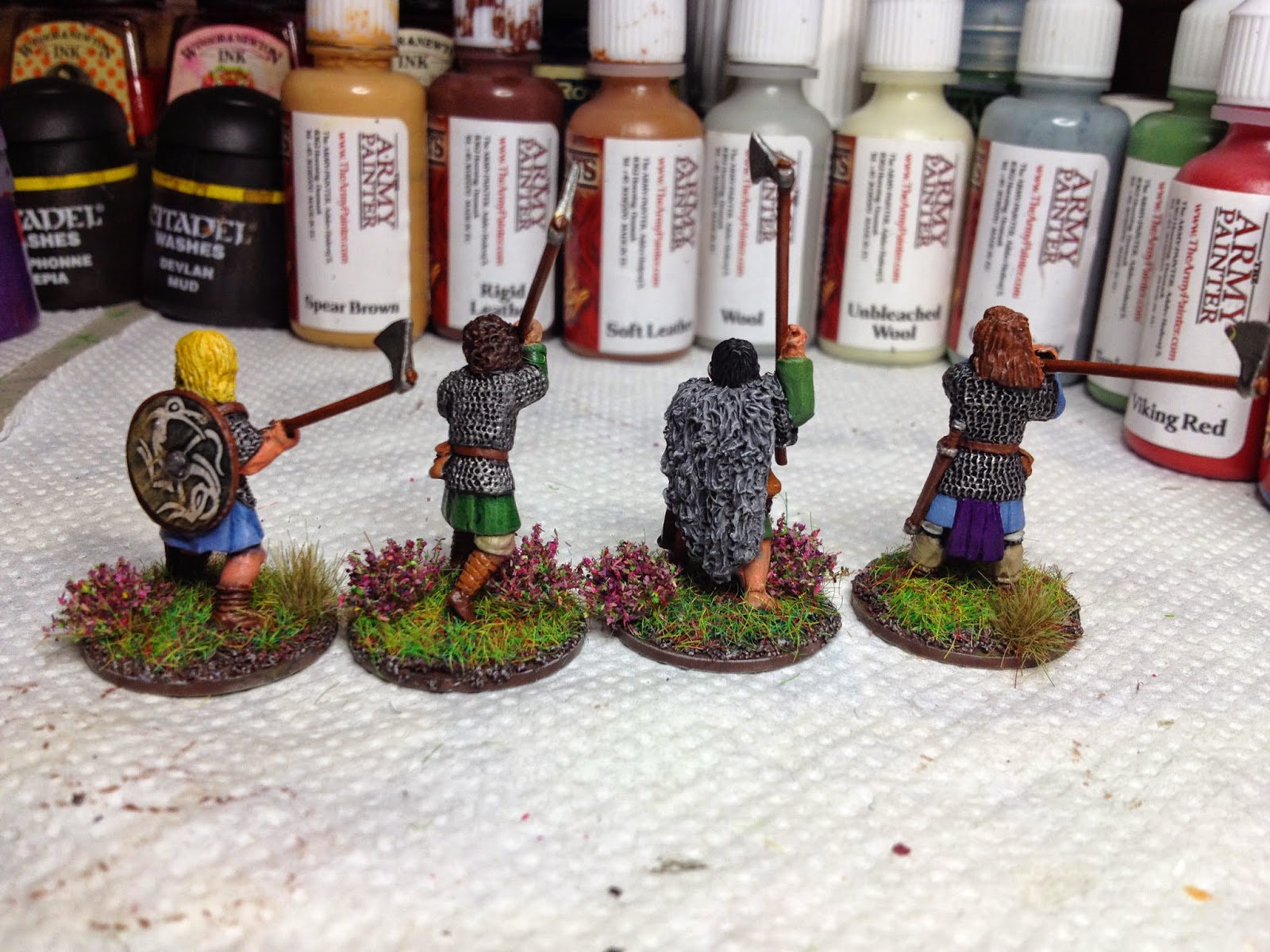 Just one more unit and the warlord to complete... Sadly my painting skills are not up to proto-tartan or stripes. At least not yet. More practice needed!

Bless You My Child...

Well, you've all now met The Anglo Dane Albonite Female and Ox (who some have likened to Hulk Hogan...). Now it's time to meet the heavy hitters.

Not quite sure what the monk like fellow is carrying in his sack, but hey if it's edible who cares!

These three old Citadel Clerics will find their way into Christian warbands as Warrior Priests. Although they still cost a point, Warrior Priests only generate a single SAGA die (unlike the Religious Advisor's two dice). However, these mace armed heavies have a few tricks up their sleeve. Not only do they all benefit from 'We Obey' and 'Side by Side', but Warrior Priests come with 3 attacks and their own unique ability - The Blade that Punishes. At the cost of a SAGA die, this last ability increases the Warrior Priest's attacks from 3 to 6 and enables units engaging in melee via Side by Side to gain one extra attack per two models. Yikes!

Looks like I'm on a bit of a roll completing figures for SAGA. Here's another old Citadel cleric painted as a Norse Gael priest. I've suggested to Kyle that he use him as a warrior priest, but all I heard was 'but dad I need the dice!' He'll probably be fielded as another Religious Advisor then...

The shield is not free hand painted this time (if only!). It is of course from the excellent Little Big Men range.

I just hope I don't end up facing him at the Canterbury SAGA day. I can already hear the cry 'Challenge!'...

Had a great time today at Ilford Wargaming Group's SAGA day. Three games were played by each of the 12 participants. In the first game I squared off against a Norman opponant in a scenario called hostages. At the start of the game 3 figures from each warband were exchanged and held in three different units as hostages. I think quite a few folks fielded levy in this game! Hostages are rescued by winning a combat against the holding unit. If a unit is destroyed by missile fire, the hostage is killed! I managed to win this one by rescuing two of my levy (against 1 for the Normans). Three points in the bag!

The second game was a variation of Chance Encounter. This time my Anglo Danes and the vanquished Normans became allies while we tried to get two baggage trains across the board to safety. We faced a combined force of Vikings (who came with a 12 strong unit of hearthguard - with an armour of 6!) and Welsh. The Gods were listening to the prayers of the Anglo Dane Religious Advisor and we not only managed to get all of our baggage across the table, but the combined efforts of Anglo Danes and Normans also smashed our opponents baggage - along with the Welsh warlord. In what turned out to be a nifty move, my Norman warlord ally used multiple dice to race from one side of the table to the other, crossing a wood and drinking all of the Viking's beer! Turns out my mounted friend was a hero character who was immune to fatigue! As you can probably guess, the Viking warlord was none too pleased and decided to take swift and decidedly deadly revenge. To cut a long story short, the Normans took one for the team but we won! Six points on the scorecard, with one game to go.

So now we arrive at the start of game three. This time, Anglo Danes, Normans, Vikings and Welsh are all friends again. We were joined by another Anglo Dane warband and yet more Vikings. Six warbands - all sat on one side of a rather long table facing another six warbands for a mega multi-player game! And here's the photo to prove it.

It turns out that at this point in the tournament, only two warbands are in with a chance of winning first prize. Since I had won two games and had 6 points, one of the contenders was my Anglo Danes!

The last game was a slaughter fest, with one side of the table battling the other and warbands keeping count of kills. The side with the greatest number of kill points (from all warbands combined) would win the last game, taking another 3 points.

And the winner was...

Another Welsh warband was sat opposite me and next to them (middle of the photo) were the Milites Christi. The Welsh fielded a unit of 12 javelin armed and mounted hearthguard who, it's fair to say, gave my Anglo Danes a jolly good spanking!! An opposing Saracen warband also did bad things to some Vikings (helping to earn the Saracens a prize for bloodiest warband). Since the opposite side had won game three, the Milites Christi took another 3 points for a total of 9 and first prize. Congratulations to Ian Mackay for a well earned victory!

It was a great day and an interesting way to play SAGA. The second game in particular was very enjoyable with lots of cooperation between the two allied warbands.

A big thanks to Dave Clarke and everyone else at Ilford for organising such an enjoyable and smooth running event.

Edit: Ilford Wargaming Group have published some more photos of the event on their website.

Three weeks to go before the Canterbury SAGA day and another point of Norse Gael warriors are completed.

Two of these metal figures have shields cast onto their bodies. One shield is quite small, while the other has some of the warrior's hair obscuring the top. Rather than mess around trying to cut LBM transfers to the correct size, I decided to try a bit of free hand (using simple designs). Here's one of the shields showing some battle scars.

Just two points of hearthguard and the warlord left to do. These have all been base coated and shaded, so just highlights and detail left. We are on the homeward stretch!

Last week Kyle and I helped run a SAGA participation game at SELWG. It was a great event and there was lots of interest in Crescent and the Cross. Friday Night Fire Fight Club supplied a really nice desert board and we ran with four points of Saracens against four points of Crusaders. Sadly, I didn't take any photos - much too busy showing people how to play! Well at least it stopped me spending too much money at the trade stands. Luckily Wargames Illustrated were there and took a photo of the show. If you know where to look, you can even see one of our games in progress.

Tomorrow I'm of to take part in Ilford Wargaming Group's SAGA day. This is a full on tournament with the last game being a 16 person mega battle! I'll try to grab some photos from this one. Only the Anglo Danes will be attending (Kyle being otherwise engaged), but my ADs will be taking their newly painted Religious Advisor.

Religious Advisors cost a point, but generate two SAGA dice and allow warbands to roll a total of 7 SAGA dice at the start of Orders (instead of the normal 6). During the Orders phase the Religious Advisor can also aquire a fatigue to allow the warband to roll two more dice. This fatigue is then discarded at the start of the Activation phase. Looking forward to seeing how this works out tomorrow.

For a bit of fun, I decided to take a priest along with my Anglo Dane warband to face David H's Normans at last week's Friday Night Firefight Club. Having seen my Religious Advisor in action, I honestly don't see how any warband can even consider marching without one! Which figure to paint though?

I'll write some more about using priests in SAGA once this batch of figures is painted. You'll notice 'Ox' at the front (a little out of focus in this shot I'm afraid). He'll be joining Mighty Kyle's Norse Gaels. The other figures give me good selections for an unarmed Religious Advisor, mace armed Warrior Priests and the Enlightened Druid. Most of these figures are old Citadel Miniatures and have lots of character. I wasn't sure about basing, but in the end decided to go with standard circular slotta bases.

I've also been working on some objective markers for different scenarios. Meet the herd!

I now have Soay sheep, Iron Age pigs and highland cattle. You'll see I've kept the Norse Gael theme running here. The livestock are all under coated and I'm planning to paint them in order to provide a break from warriors and hearthguard. Lastly, here's a couple of baggage items for a future cart model.

These resin pieces are sold by Colonel Bills (not Aintsy as I first posted). They are single pieces and have given me an idea for making changeable baggage pieces for different warbands/scenarios.

Another point of Norse Gael warriors has its base coat and wash completed. Hopefully I'll get time to apply highlights and final detail later this week. I might just get these done in time for the Canterbury SAGA event in November...