Wilkinson's Campaign Against the Slavers 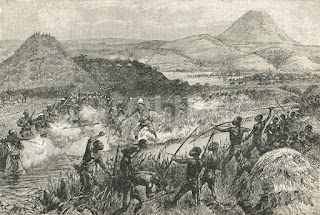 Wilkinson's Campaign was originally written by Gary Chalk and first published in issue 270 of Wargames Illustrated (pp. 98-107). It involves a British expeditionary force travelling along a fictional river to stem the influence of local slavers. Since we weren’t playing games during the various lockdowns I’ve had chance to expand on the published campaign and written several new scenarios and significantly increased the number of event cards. Given the multitude of posts I have written (and will write) that deal with rules, terrain, scenarios and battle reports I thought it would be useful to create a page that better organises things. I may edit or rearrange some of the blog posts so this page will act as a useful contents to the overall campaign.

Here you will find the various battle reports from our games during the campaign. Since the list might get quite long, these posts are listed with the most recent battle first to make it easier to find the latest dispatch.
The Wasimba Village (stay tuned!) 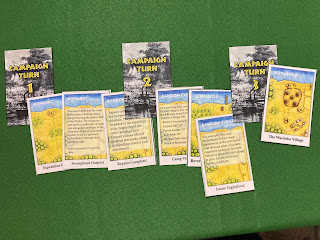 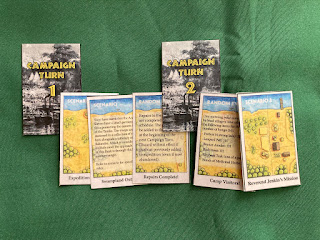 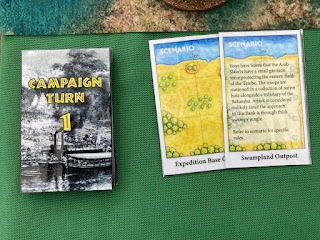 Individual battles are fought using The Men Who Would Be Kings rules, but the remainder of the campaign is driven by various event cards. The rules that I have put together expand on the campaign written by Gary Chalk and published in WI. I’ve also tweaked the rules for MWWBKs in a few places to make them work better with the adapted scenarios and added rules for new units and new formations. I’ve tried not to replicate things presented in WI, so to play the campaign you will also need to refer to the original article.

There are lots of different event cards. These include effects that may benefit or hinder the expedition. Some effects are applied immediately and may be specific to a particular troop type. Other cards may be kept and played either as required or when specific conditions are met. I'll reveal these cards as the campaign unfolds.

Object abilities are described on their respective card. Objects may be beneficial, granting various upgrades. They may be valuable, scoring campaign points if they remain with the expedition at the end of the campaign. Some objects may be cursed, inflicting penalties on one or more of the expedition's units. Certain objects count as food and all objects have a hongo value allowing Wilkinson to trade with the people he meets.

These represent events that are triggered either when a unit enters a dangerous terrain area during a battle or according to scenario specific rules. The event may affect one or more units and may be temporary or last until the end of the battle. These cards will be revealed as the campaign unfolds.

Forces used by Major Wilkinson and the Arab slavers were originally intended for In the Heart of Africa. They are fully detailed on pg. 101 of Wargames Illustrated (270). I decided to see if I could convert the forces to something more suitable for MWWBKs.

Some scenarios have been written from scratch others are adapted from published sources. As our own campaign advances I’ll publish the rules for each scenario. These rules will tweak any previously published scenarios to make them work with MWWBKs.

Run to the River

Attack from the Trees

Subplots can be triggered in different ways. Some require the expedition to find a specific object and/or special character, others depend upon a Random Event Card being drawn. The players can choose to increase or decrease the likelihood that one of these subplots will occur depending on whether they prefer the campaign to be somewhat historical or enjoy including more pulp like content.

Adventures in the Dark Continent

Tarzan of the Apes