"The region through which we are now advancing is thickly forested and heavy downpours are frequent. My guides have told me that this jungle is home to numerous unique species of birds, monkeys and plants... One of the guides reported back to me this morning, saying that he had discovered, scattered throughout the forest, elements of stone statues..." 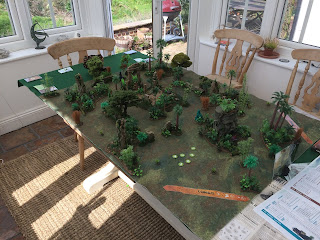 Mary's column is marching through the forest when they come across numerous stone ruins that are being reclaimed by the surrounding jungle. 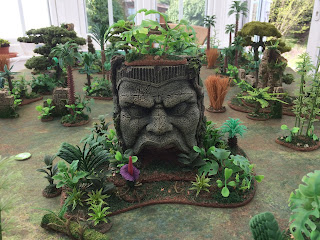 But across from her, through the trees and heading towards the same treasure is the witchdoctor Ujuwa and his column of fierce warriors. 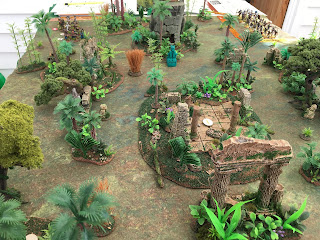 Whilst travelling upriver on the Bel Azur, various mishaps have befallen Mary's column. Exhausted, her soldiers find themselves unable to push on and are forced to stop and catch their breath.

[Both columns start the game exhausted, but an unlucky roll on the Over Swift Water table means that Ujuwa is able to place stress tokens on two of Mary's groups.] 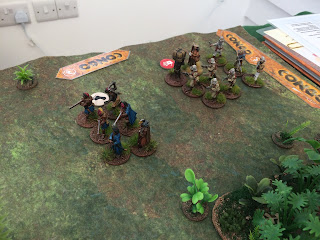 Exhaustion also takes its toll on Mary's Trained Askaris and one man succumbs to jungle fever. The famed botanist Bergamote, is still rather tender after his recent encounter with a hippopotamous. But at least he is now back on his feet after a brew made from medicinal plants.  The Trained Askari push on and step carefully into the overgrown ruins hoping to find a section of stone statue. 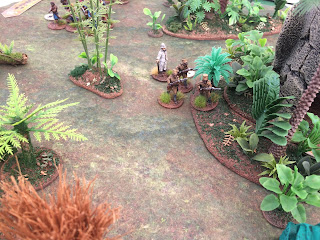 Ujuwa has the same idea and his Pygmy Warriors rush to the same destination! The pygmies hurl their spears and charge! The Askari are caught unawares and some fall whilst the remainder scramble backwards.

But the pygmies pursue them and whilst Mary and her Soldiers look on helplessly, the group are slaughtered. Bergamote's pith helmet saves him as a spear glances off his head, but he falls under a jungle bush, unconscious.

[The botanist is 'killed' during the melee, but at the end of the game is considered wounded... Again!]

Led by Mary's Kirangozi, the Ruga Ruga rush forwards in the hope of finding forgotten treasure. But as they scramble through a particularly dense thicket, the group are set upon by a leopard! 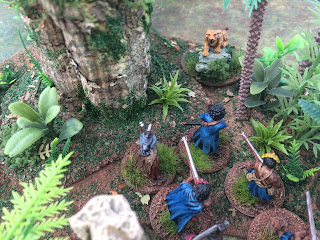 The Ruga Ruga are drunk on the thought of loot and the leopard is quickly dispatched. The pelt will fetch a good price once they are back in the port. They push on and find strange carvings. 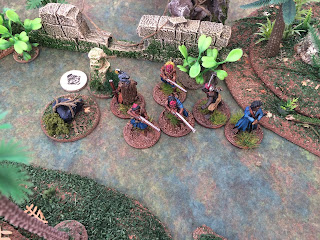 More ruins lie ahead and the Ruga Ruga scramble over tumbling walls to discover the remains of an ancient temple. Within the temple they find another section of statue. But what magic is this? The broken pieces appear weightless and can be carried by a single man. Dark forbiddings start to trouble the Ruga Ruga as they hack their way onwards through the jungle.

[We were a little surprised that the stone statue sections are not classed as bulky objects, but assumed it was to help balance the game.] 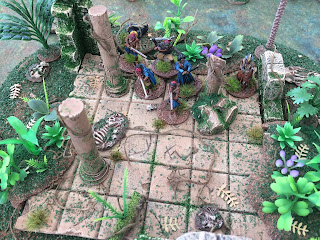 Meanwhile, Ujuwa sends his Archers forwards whilst, accompanied by his Bundukis, Ujuwa finds another section of statue together with a stash of forgotten loot. 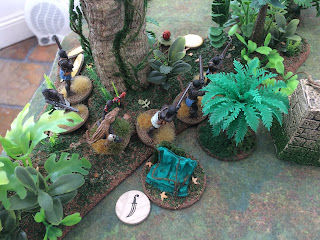 Having found their courage, Mary's Soldiers brace themselves as the Pygmy Warriors charge towards them. 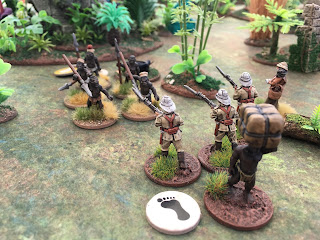 A soldier is pierced by a spear and falls, but Mary scatters beads on the ground and the Pygmy assault is deflected.

[Mary's pacifist ability is very useful in melee and helps her group to minimise casualties.]

But the Pygmy Warriors are not fooled twice by these worthless trinkets. They now keep their distance and throw spears.

[The pacifist ability is useful in melee, but does not protect Mary against missile attack.]

Seeing that the pygmies possess part of a stone statue, Mary urges her Soldiers to charge. Another soldier drops to the ground and the Soldiers are forced back. But the Pygmy Warriors are becoming fatigued and also retire to gather their strength. 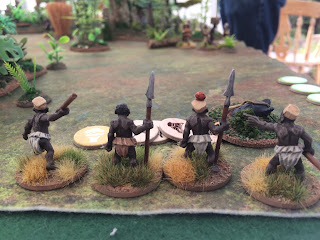 More rain starts to fall and both columns reflect on the situation.

Mary's Adventurer's are a man down at the hands of the pygmies and have retreated into some thick vegetation to hold a defensive line. They are joined by Mary and the Soldiers. Mary is dejected at the thought of losing the stone statues, but she is unaware that her Kirangazi and Ruga Ruga possess two parts and have spied a third.

Ujuwa has found that the jungle has not been conducive to his witchcraft. A moment earlier, one of his Bunducki disappeared in a puff of smoke as a ritual went terribly wrong. But Ujuwa remains confident. He is in possession of three sections of statue and his Warriors are pursuing the unsuspecting Ruga Ruga. Can he claim all six? 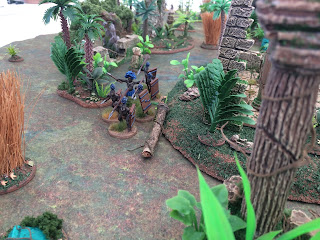 The Ruga Ruga push their way through the vines to claim the last piece of statue.

Disaster! This area is riddled by spiked pitfall traps dug by the local Fang tribe. Three of the Ruga Ruga disappear into the ground where they are impaled. Grabbing the last piece of statue, Mary's Kirangozi and last remaining Ruga Ruga suddenly see Ujuwa's approaching Warriors and flee for their lives. 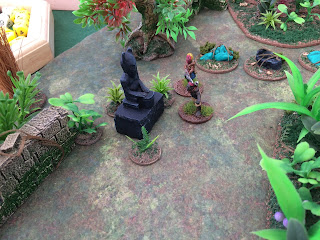 Suddenly there is a mysterious popping noise and a small plume of smoke appears where the last Ruga Ruga once stood. Mary's Kirangozi looks on in disbelief and finds himself stood alone with Ujuwa's Warriors bearing down upon him.

[At the end of each turn, groups in possession of a stone statue must roll a d6. On a roll of 1, one of the group vanishes...]

But both groups are now fatigued. Can the Kirangozi escape? 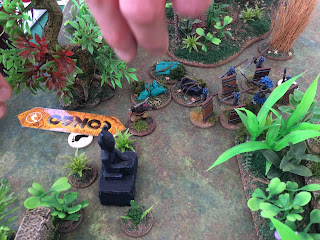 He certainly has a good go at it! Lucky those statues are light as a feather...!

As he scrambles amongst the bushes, the Kirangozi's luck runs out. 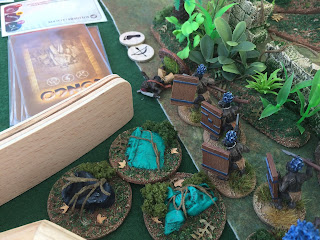 The light is fading and the jungle will soon be in darkness.

Ujuwa is satisfied with his haul, but can he stop the foreigners for good? 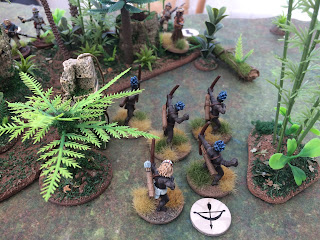 Ujuwa's Hunters pursue Mary and she is forced to retreat. As the Hunters close in, a thick rancid smell fills the air. The Fang Tribe have been burning rubber and a thick pall of smoke covers the jungle. 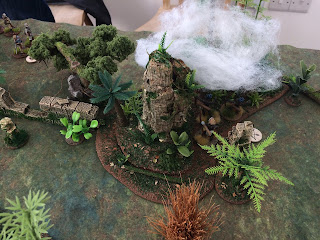 Mary and what remains of her column quietly slip away into the darkness.

Ujuwa secured all six pieces of statue, made two discoveries, gained 4 pieces of loot and dispatched two characters for a total of 33 vp.

The Congo gods have not been kind to Mary. She did manage to kill one of Ujuwa's sacred warriors and made two discoveries, but she only scored 13 vp.

Mary has lost this adventure. Her Kirangoza and botanist eventually stagger through the jungle to find her camp but both look much the worse for wear.  Should Mary use her precious medicinal plants to heal them or keep the plants in reserve? She has gained no Knowledge during this adventure and remains at level 1, so still has no barter tokens left...

With his two intact statues, Ujuwa gains two domains of knowledge. Although the nearby river is tempting, he decides to travel through thriving jungle where a hermit leads him to a plant that can be used to cure sickness. He gains another 3 medicinal plants. Ujuwa has successfully made 11 Rituals (down 1 from the last game).

After the Kirangozi and botanist finally make it to camp, Mary chooses to travel over swift water. This time, all is well. Mary has now spent 15 months on expedition.

Mary: 20 AP (up 1 from last game; the injured characters are currently costing her -2 AP)

Mary still has one domain of knowledge, but Ujuwa now has 2 and he will gain a level in the next adventure.

Stay tuned for our next Congo adventure - Encounters in Hostile Lands

Just a quick entry to announce that my Congo inspired Dino Safari participation game will be running at this year's Broadside Games Show. 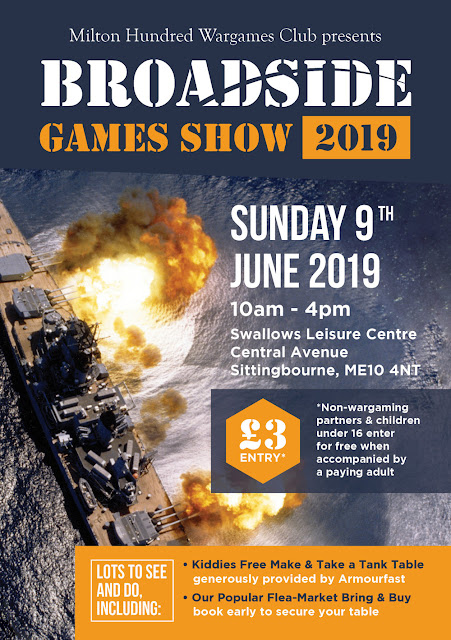 Still quite a bit of work to do on the game, but it's all coming along nicely. The aim is to have a fast and fun game that pits various pulp themed adventurers against a volcanic island that is inhabited by dinosaurs.

The main rules are more or less finished. Various cards and other bits and pieces need to be printed, but everything is in hand. Even the terrain is mostly done. Figure painting is next on the list, but some groups are already completed.

I don't want to give too much away just yet, but here's a teaser to show the build process for the volcano. The volcano is a paper mâché model from Hobby Craft that has been suitably embellished... 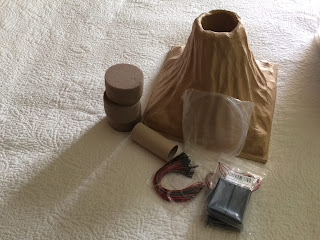 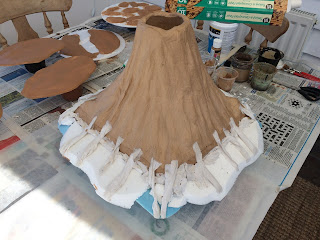 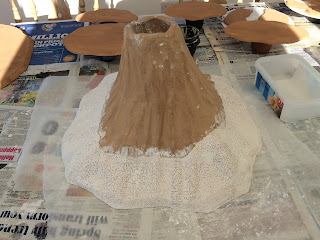 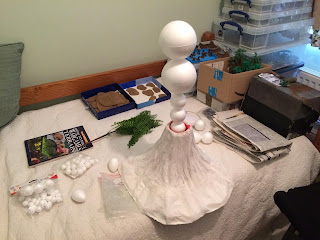 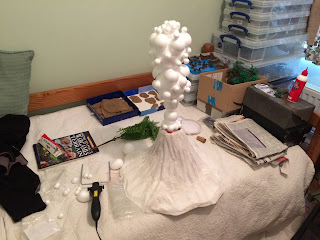 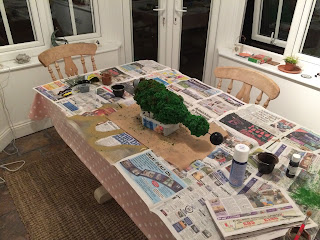 I'll reveal the finished terrain piece in a future post.

Don't worry though, there's a Congo game planned for Saturday when we will continue with our Throne of Thunder campaign.