Wiping sweat from his eyes, Harold emerged from the trees and stood on top of a steep ridge. The march from York had been made in haste and his men were weary. Few had yet rallied to his banner. Would others arrive before nightfall? With Gyrth and Leofwine at his side, Harold knew that the throne of England was at stake and there could be no retreat.

Time for the conclusion to our 1066 campaign as we fight The Battle of Hastings!

[Following feedback from pyruse on the Studio Tomahawk forum we decided to make a small amendment to the scenario rules for Senlac Hill. The hill functions as a steep elevation but reduces movement of mounted troops from L to M (rather than L to S). ]

Harold's forces were somewhat depleted and fatigued after Stamford Bridge and the long march south. But they stood determined and defiant. 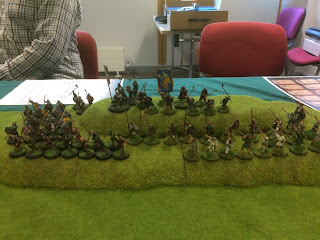 Below them stood William and his Herald, Ivo Taillefer, together with a host of Norman cavalry, archers and crossbowmen. 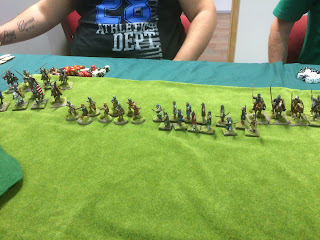 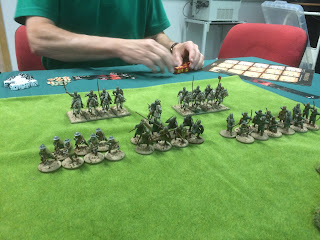 Harold's left flank was protected by woodland, whilst a rank area of marshland was located to the right. 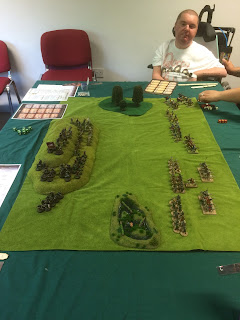 The Normans started their advance, but found the ground rough going with several units feeling as though they had become trapped in a mire.

Ivo's cavalry made haste and picked their way through the woodland. Although fatigued, they had manoeuvred into a good position for a flank charge. 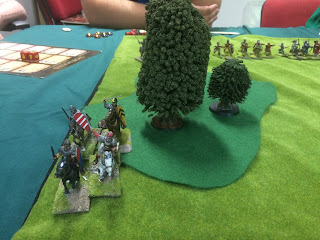 Another mounted unit galloped ahead to scout out the hill. 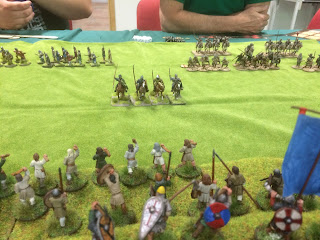 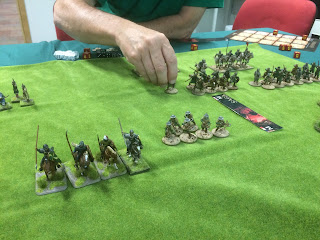 Missiles rained down upon Harold and his men, but casualties were light and the shieldwall held firm.

Ivo suddenly burst into song and his troops were revitalised. Sensing that a victory could be achieved with a frontal assault his cavalry surged forwards and positioned themselves directly in front of the hill. Harold's slingers reached into their pouches... 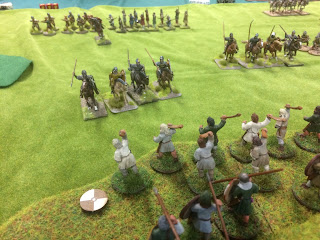 The Norman cavalry found themselves battered by stones. Where was their support?! 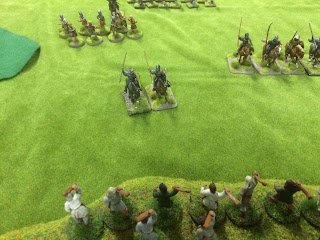 Norman crossbows quickly followed up, but Harold's men sensed that the Norman line was floundering. 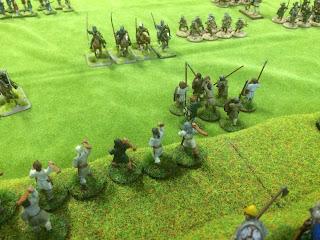 But it was too late. Warriors charged down the hill towards the startled Normans! 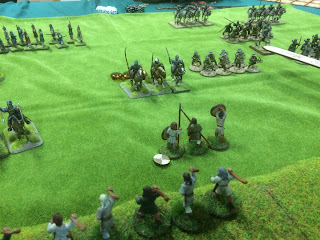 William look on in amazement as the warriors crashed into the Norman cavalry like great Lords of Battle. But, whilst fatigued by the endeavour, the mounted hearthguard held their ground and inflicted heavy casualties on their assailants. 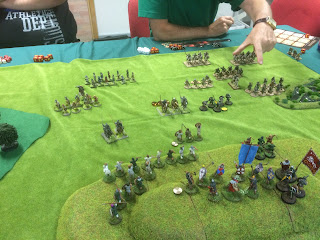 More English warriors started to stream down the hill. William's crossbows desperately tried to reload, but were beaten back. 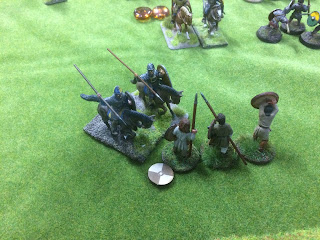 The English warriors started to tire and suddenly they found themselves alone and isolated. Seeing the threat, the Norman knights regrouped and hacked the warriors down. 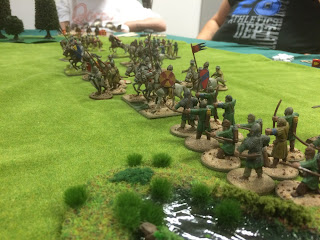 The English assault had been defeated, but not without some loss to the Normans. William took stock of his forces. 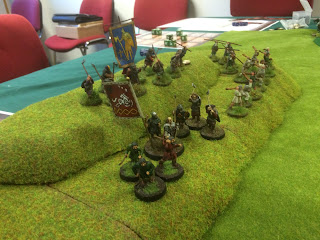 Harold and his huscarls stood defiant. The shieldwall may have thinned as the day progressed, but it remained a formidable barrier.

"But what of the fyrd?" asked Gyrth "Will they abandon us in our time of need?"

"Have faith brother", replied Leofwine "they will be here!" 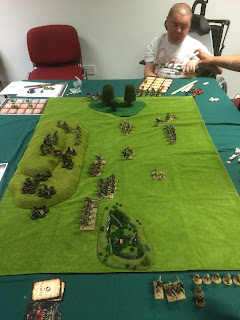 William looked up at the afternoon sun and a shadow passed over him. Was there still time left to secure the crown? 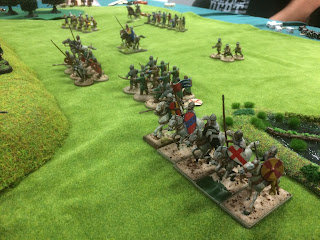 Joining his knights, William positioned himself on Harold's flank and charged a unit of warriors who were trying to scramble back up the hill to safety. 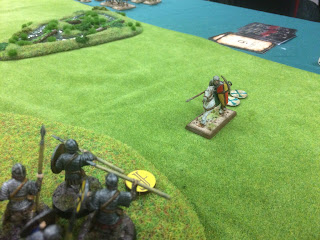 William's knights trampled down the warriors. But as the frenzy subsided, William looked about him and realised that his knights also lay slain. By now it was late afternoon. With his knights dead, William cried out in despair. The crown of England was slipping from his grasp... 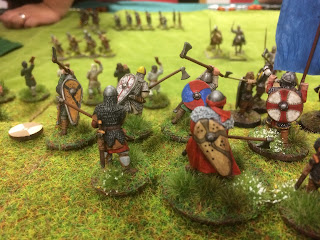 Harold gazed at the Normans below him. Some of the Norman cavalry were starting to retreat! Nightfall and the protection afforded by its darkness would soon be upon them.

Gyrth turned to his brother in puzzlement. Harold cocked his head to listed. Above the din of battle a lone voice could be heard. 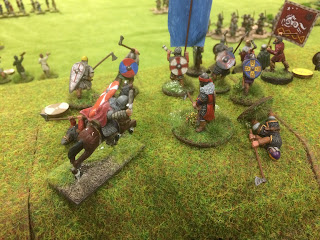 Suddenly Ivo Taillefer rode from the lengthening shadows and charged up the hill. His song drove the English warriors before him. What remained of the levy slingers fled in panic and Ivo fell upon Harold and his brothers. Shielding Harold from the Norman, both Gyrth and Leofwine fell. Ivo raised his sword and brought it down upon Harold. 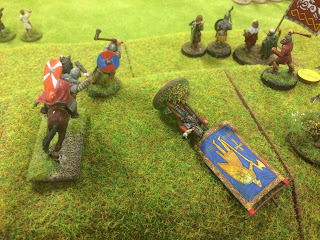 As he staggered backwards, Harold watched as one of his loyal huscarls threw himself in front of the bloodied sword. Ivo turned and hacked at the household guard. 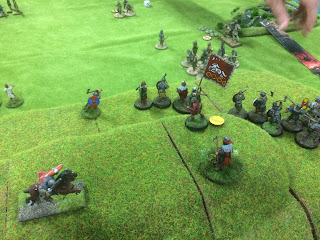 Night was nearly upon them, but Harold stood alone. Before him stood Ivo, his expression and voice that of a madman. 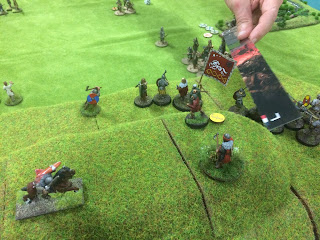 As the weak October sun sank beneath the trees, William could be heard screaming "Shoot!". A volley of arrows rained down upon Harold.

But Harold lifted his shield above his head and stood firm!

A loud cry was heard from the woods behind Harold's line and suddenly a great host of men appeared.

Squinting in the fading light, Ivo looked on in awe and his voice fell silent.

Night had fallen and the fyrd had finally arrived!


What a finale! We all thought Harold was safe and secure upon his hill, but Ivo's late charge nearly won the crown for William. We played for eight turns. If the Normans had one more turn, then it is likely that Harold would not have survived. As it was, Harold survived until the end of turn 8 and so secured a minor victory. A great game and huge thanks to Anthony, Carl, David and Rob!

I've been a bit busy recently with work but still found time to finish off bits and pieces here and there for games set in Darkest Africa. So time for a quick update...

First off, I managed to organise a mid-week gaming session and introduced two friends from the club to Congo. 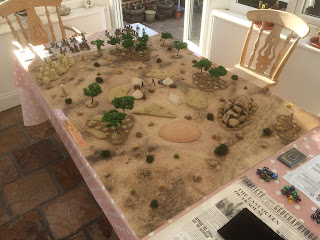 They played the Last Queen scenario with Dan's African Kingdom trying to stop David's White Man Expedition from making off with the crown. 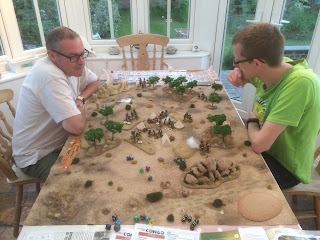 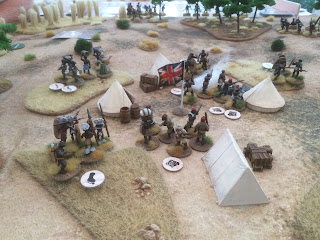 Much fatigue was earn't in this game and although the crown was recovered, the White Men just managed to scrape a victory on points. 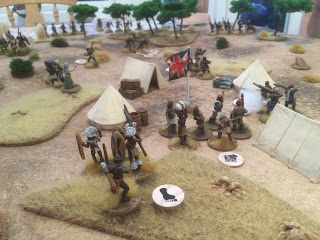 A couple of weeks back I also managed to get a game in of Death in the Dark Continent. This is a game that I really like. It has an excellent game mechanic for disorder and the alternate unit move system with distances randomly determined really makes players think about what to move and when.

When painting terrain for Congo, I decided to focus on Savannah. Despite only 3 of the 12 available Congo scenarios (including two published in magazines) being based in Savannah, this turned out to be a good move. My Azande force is built from Congo's African Kingdom and their 'Home Terrain' in DitDC is 'grassland'. In game terms, grassland is Savannah but with fewer trees.

The gaming mat I use for Congo is marketed as a 'Zulu mat' and is actually 6' x 4'. I fold it for Congo, but the full size cloth mat is perfect for DitDC.

In out first game of DitDC, my Azande skirmishers suffered terribly at the hands of Paul's Zulu warriors. For our next game I've decided that my Azande will probably dig a few pitfall traps.

In DitDC pitfall traps are sized the same as a base that holds two skirmishers, so I started by cutting some pieces from hardboard. 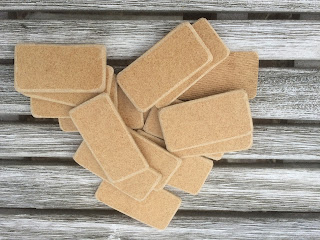 These were than covered in filler, allowed to partially set and then uneven rectangles were pushed into the filler using polystyrene. Once fully dried, I covered in my usual sand mix, primed and painted to match the rest of my Savannah terrain. 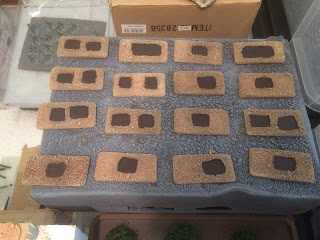 For this I use cheap acrylic paints available at craft stores. The colours I use are 'Suede' for the base coat, with a very dilute 'Burnt Umber' wash and a final highlight with 'Sandstone'. The pits were painted a very dark brown (Valejo 'black brown'). 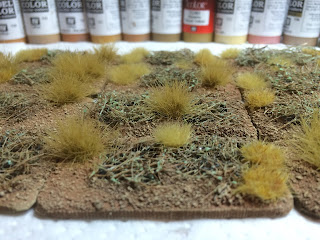 I then cut up some of the rubberised horsehair that I previously used to make a bomas for my village and sprinkled this over the pits, using PVA to glue it down. Finally I added a few scenic tufts. The idea was to leave just enough of the dark pit visible to give a hint that the base may be concealing something. It'll be interesting to see how useful they are in a game.

Now it's time to knuckle down and try and get my Azande finished!