A lone Viking champion stands upon a wooden bridge. Sunlight glimmers on the blade of his axe and on the armour of the approaching English army...


Background
Harald  Hardrada and Tostig Godwinson defeated the English fyrd at Fulford Gate. Although many of the English were cut down or drowned in the marshes, a few managed to escape. Morcar and Edwin both survived the battle and retreated back to York.

Rather than risk losing more men and damaging the city they coveted, Harald and Tostig agreed to receive hostages at the nearby Stamford Bridge. The hot September sun beat down upon them and having destroyed the local fyrd they chose not to exhaust themselves and left most of their armour with their longships. Some armour was also piled in other camps across the Battle Flats.

Upon hearing of the Viking invasion Harold Godwinson had to make a choice. Stay in London and prepare for battle against the expected Norman invasion, or march north to relieve the City of York.

Whilst feasting and drinking in their camp on the Battle Flats the Northmen looked to the distant ridge expecting to see the arrival of hostages. Instead they saw a fully armoured English army, headed by Harold Godwinson. Light forces west of the Derwent were quickly overcome by the advancing English. As Viking stragglers hastily retreated towards Harald's camp, a lone champion remained stood on the bridge, with nothing but his axe and courage to hold back the attackers.

Meanwhile in Normandy, the winds had changed.


Forces
The attacking force includes two 6 point Anglo Dane warbands led by Harold Godwinson (Hero of the Viking Age) and an Ealdorman whose name is lost to history (standard warlord).

[If playing only this scenario, the Viking warbands should be composed of two 6 point warbands. Harald Hardrada may be accompanied by a Bard or a single unit of Gall-Gaedhill (Sons Of Death). Tostig's warband may include a single unit of Flemish Mercenaries.]

No other Sword for Hire units are permitted.

One of the Viking warbands may replace a single available hearthguard figure with a Warrior Priest representing a Viking champion (this is a free upgrade that follows all normal Warrior Priest rules but is worth only 1 slaughtering point if killed).

Starting with the defender, each force alternates placing an elevation (B) on the Battle Flats until three terrain items have been placed. Each item of terrain must be placed more than M away from any other terrain (including road, bridge and river).

After terrain is placed, the defending force places tokens representing Harald's camp on the Battle Flats. The tokens must be placed within L of the middle of the long table edge opposite the river. One token should be designated as the centre of the camp (C). Suitable tokens for the camp could include boxes, crates, small tents and of course, several barrels. 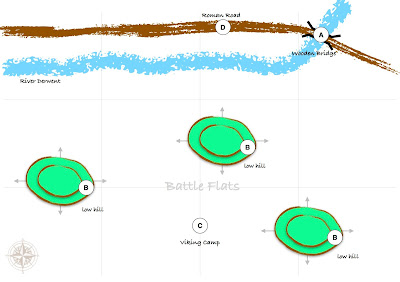 Deployment
Each Warlord in the defending force chooses one of his units. This unit forms reinforcements and is not deployed at the beginning of the game.

The Viking Champion is deployed on the bridge (A).

The two defending Warlords (and any accompanying Bard) are then placed within S of the centre of the camp (C).

Starting with Harald, each defending Warlord deploys their remaining units with as many figures as possible located between S and L of the centre of the camp.

The attacking force then deploys all units within M of the road (D). No attackers may be deployed on the defender's side of the river or within S of the bridge.


Length of Game and Special Rules
The game immediately ends if both Harald and Tostig are killed. Otherwise the game continues for 7 turns.

Each defending warrior and non-berserker hearthguard unit starts the game with a -1 armour penalty. Units may recover a +1 armour bonus by ending their move on an armour token. Armour tokens recovered in this way are removed from the table.

Reinforcements
The defenders have sent word to their ships that they are under attack and fresh armoured troops may arrive to reinforce them as the battle progresses. From Turn 5 onwards each defending Warlord should roll 1d6 at the beginning of the defenders' turn. If the score is more than the armour value of their off-table unit, all figures within the unit are placed within M of the defenders' long table edge.

Fatigue
The attacking force has marched from London and troops may be somewhat fatigued. Following deployment, the defending force rolls 1d6 for each attacking unit in turn. The attacking unit suffers 1 fatigue if the roll is higher than its armour value.

Viking Champion
If the Viking champion is killed, each unit in the attacking force may immediately be activated once to move. These movements may not be used to initiate melee. The movements do not cost any SAGA dice, but normal rules for movement and multiple activations apply.

Order of Play
The attacker has the first turn.


Victory Conditions
At the end of the game both forces earn slaughtering points for each enemy figure killed.

The Viking Champion earns double slaughtering points for each enemy figure killed on the bridge.

Anglo Dane Major Victory
Harold Godwinson remains alive and both Harald Hardrada & Tostig are killed. The Vikings are routed and most of their longships are destroyed. Whilst recovering in York, word reaches Harold that William has landed on the South Coast. The Anglo Danes take the road to Hastings. Harold's victory over the Northmen invigorates his troops and men rally to his banner. When rolling on the recruitment table at Hastings, each Anglo Dane warlord may roll 2d6 and choose one the results.

Anglo Dane Minor Victory
Harold Godwinson remains alive and the attackers score more slaughtering points than the defenders. After pursuing the remaining Vikings to their longships, Harold returns to York. Whilst recovering, word reaches Harold that William has landed on the South Coast. The Anglo Danes take the road to Hastings.


Viking Major Victory
Harold Godwinson is killed and either Harald Hardrada or Tostig remain alive. Whilst the Vikings replenish their supplies, word reaches their longships that William has landed on the South Coast. The Vikings take the road to Hastings!

Viking Minor Victory
The defenders score more slaughtering points than the attackers. Battered and bruised but with their pride intact, the Vikings make an orderly retreat to their longships. Whilst recovering in York, word reaches Harold that William has landed on the South Coast. The Anglo Danes take the road to Hastings. Harold's lacklustre performance does not inspire confidence. Neither Anglo Dane warlord may gather recruits at York. Nor may they roll for recruits at Hastings.


Draw
Any other result is a draw. The Vikings disband and after learning of the Norman invasion, the remnants of the Anglo Danes take the road to Hastings. Although they are unable to recruit from the local fyrd, both Anglo Dane warlords may roll on the recruitment table at Hastings.

Warlords 'killed' during the game are only injured. They automatically start the next game with 1 fatigue and always fight with 1 less die in melee (to a minimum of 1 die).

Other troop casualties follow the rules described in Age of the Wolf.

Each Viking Warlord may immediately recruit 1 hearthguard, 2 warriors and 3 levy. Where possible, these figures must be added to an existing unit (following normal rules for equipment and maximum unit size). If no suitable units are available the recruits return to their longships and are not added to the marching warband.

If the Vikings were defeated, each Anglo Dane Warlord may immediately recruit 1 hearthguard, 2 warriors or 3 levy. Where possible, these figures must be added to an existing unit (following normal rules for equipment and maximum unit size). If no suitable units are available the recruits return to York and are not added to the marching warband.

I decided to modify the victory conditions a little. The changes mean that there is a penalty if the Anglo Danes do no achieve a significant victory over the Vikings. This penalty will affect Harold's ability to recruit extra men when he is in York and also when facing William at Hastings.