What Would Professor Jones Have Made of it?!

Last October, Friday Night Fire Fight Club tasked me with building some terrain for a naval game set in Medieval China. The deadline was Cavalier in February. The brief was to create some tall rocks/islands that were connected by a bridge and on which sat a bell...

Hmm - that sounds like an excuse to get some Lost World jungle columns built for a future game of Congo.

It all began with a few rough templates drawn on baking paper... 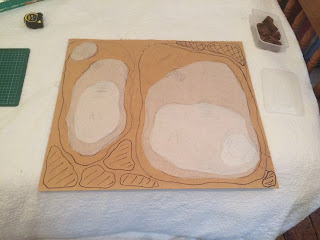 But how to get the height without making something so heavy it will implode into a black hole under its own weight (or put another way, I'll drop it whilst carrying from car to show).

I don't have any of the high density foam (and it looks quite pricey), so I opted to go the model railway route and use polystyrene. The polystyrene was built up in layers that were attached together using bbq skewers and gaps between filled with scrunched up newspaper. 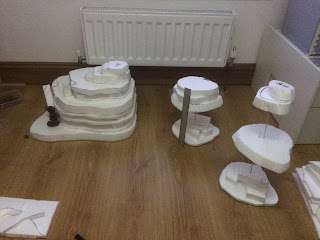 Over this I put paster cloth, providing both shape and rigidity.

The overall shape was largely dictated by the need to get some height into the structure. The idea was to have rope bridges connecting the islands beneath which boats could sail. But since the first jungle column needed to be accessed by sea, figures had to gain height quickly. In the end I decided to use bark chipping as my steps and these were all carefully selected from a large bag (bought quite cheaply at local pet shop) and glued in place. 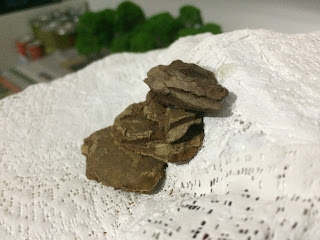 The steps were blended into the column using filler. 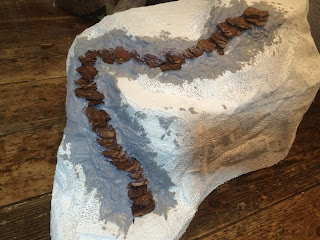 I found the perfect answer in a blog post over on the excellent Lead Legionaries blog. A dolls House picket fence! Perfect! And saves an enormous amount of time. 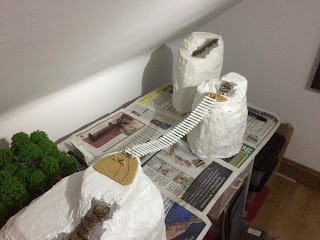 The fence came in a single long piece and I was able to cut it into three lengths (one short length will be used for another project). The pointed ends were snipped off and the end wires were wrapped around more bbq skewers that had been attached to precut sections of mdf. This meant that the bridge could be taken off the columns to allow the whole thing to be more easily transported.

Of course, I needed a way to ensure the bridge could take the weight of figures. I therefore attached small flat magnets to both the rock column and the bridge base. This helped to stop the bridge lifting, but it was still prone to sliding. I therefore cut more of the bbq skewers and these were attached to the bridge base and acted as small pegs that fitted into holes in the main column structure.

The final rock effect was created with more filler that was applied with fingers (swiping horizontally around each column). The real Chinese rock formations are made of limestone and much paler - almost white. But since I wanted to use the terrain for other purposes I decided on a more generic paint scheme and settled on brown/grey to match my other jungle terrain. This I achieved reasonably quickly by spraying the whole structure with grey spray primer and then giving it a heavy highlight with white spray primer. Once dry the columns were washed with various shades of grey, green and brown and the whole lot dry brushes with light grey. 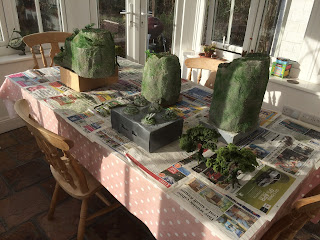 The bridges were finished with thin string (two gauges), that were first soaked in light tan paint and then individually strung. This bit took a while! But the final effect made it worthwhile. 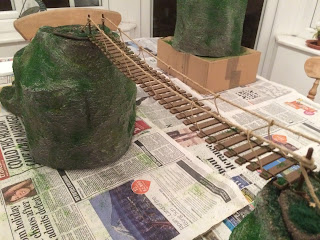 So, what would Professor Jones have made if it all?! 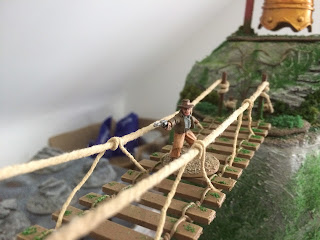 I can't take credit for the bell btw, this was scratch built and painted by one of my club friends, David.

The tops of the columns had already been covered in my normal basing mix of sand and finished to match my other jungle terrain, with green scatter material, clump material, vine and various aquarium plants. 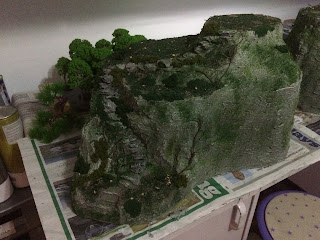 Large spaces have been left to allow movement of figures, but jungle scatter terrain can be added to give a more dense jungle effect when needed. I also have several hanging vines that are removable and can be added to suit a particular game.

Here's the terrain in play at this year's Cavalier. 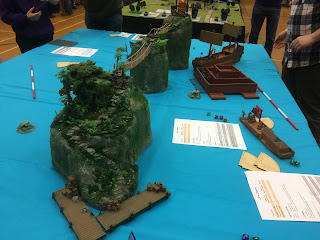 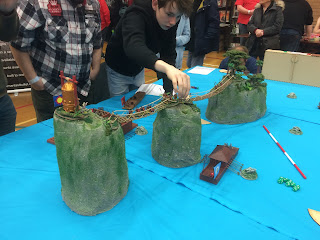 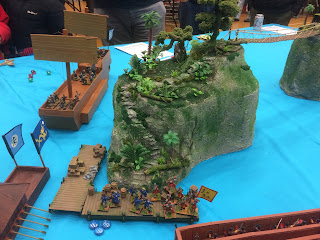 David and another club friend Paul, scratch built all of the boats. The Cavalier game was based on Blood and Plunder. The aim being to climb the columns, rush to the bell and ring it. All the while trying to avoid being shot to pieces by the crews of the other boats. Lots of fun on the day!

The next step is to build more complementary jungle pieces that can be placed adjacent to the columns for games of Congo etc.