"The men are not their usual selves. They are in the grip of fear: all singing has died out and they look nervously around them, expecting an attack at any minute. We are in Fang territory." 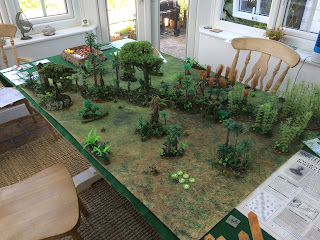 Mary's column climb out of their pirogues and set up camp within a jungle clearing. She brews up a pot of hot water and uses her remaining stock of medicinal plants to cure her Kirangozi and poor M. Bergamote the Botanist of their afflictions. Feeling more refreshed, they prepare to depart. The ominous sound of drums can be heard from nearby Fang villages. But Mary must push on if she is to reach her goal. 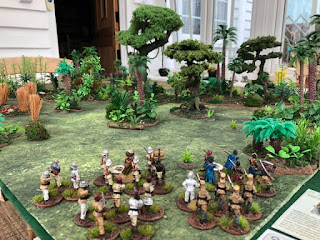 Even Ujuwa, looks nervously at the wall of green before him. This is his land, but the local villages have not pledged support to his cause. He must find the white woman's camp and purge it of evil spirits.

[Each column starts within M of opposite table corners. To gain Knowledge Mary and Ujuwa must cross the table and escape from the opposite corner.] 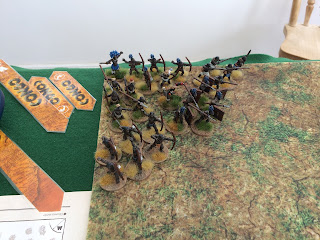 Both columns head carefully into the jungle that lies ahead. Mary's Ruga Ruga stare nervously at the tall trees. What terrors may hide in their dark canopies? 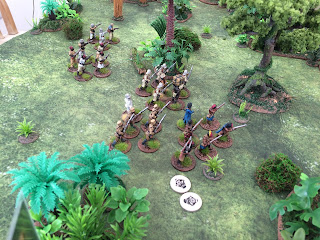 Ujuwa's men are undaunted by the forest, but the local Fang tribe does have a reputation... 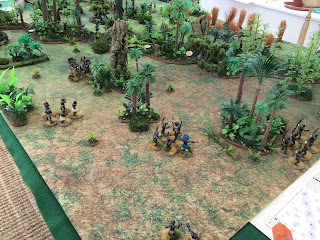 Mary, accompanied by her soldiers and last remaining bearer pushes through the vegetation and stare up at a giant forest tree. Suddenly there is a rustle and poison tipped darts shoot down from the canopy. Mary and her men drop to the forest floor. But too late! Her bearer and a soldier shriek in agony and do not stand back up.

[In this scenario, the dangerous terrain really is very dangerous! Every time a group enters terrain they and any other group within S of the terrain find themselves shot at by Fang warriors hidden in the canopy. A 2 x D8 shooting attack is made, but if the D8 show the same number there is no cover roll.] 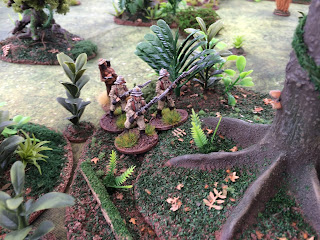 Ujuwa hears the commotion and smiles wryly to himself. While Mary and her soldiers scramble to avoid the darts, Ujuwa starts to softly chant. Summoning the spirits of the forest to aid him, Ujuwa performs the Ritual of the Wild Hunt.

A rustling sound can be heard from the dead leaves beneath Mary's feet. Giant ants emerge from holes around the base of the tree and flailing helplessly two soldiers fall to the ground where they are engulfed by the biting and stinging terrors. Mary and her remaining soldier catch hold of low lying branches and haul themselves out of danger. But they are exhausted by their efforts. 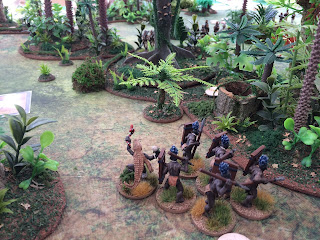 Unable to contain his glee, Ujuwa urges his warriors onwards and they head into a thicket. But his mirth is cut short when poisoned darts cut down two of his men. The Warriors are suddenly paralysed by fear and are unable to move.

[The discovery marker in this terrain area is cursed preventing the group from activating during the next Actions phase.] 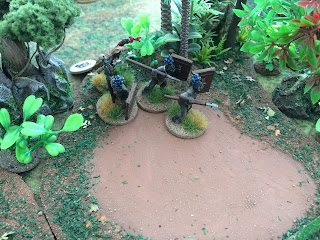 [This above photo illustrates how the terrain can be modified. I create a jungle base to which different elements can be added to create more variety during different games. In this case the central terrain area has been removed to more easily place the figures. Once the figures move on, the terrain is replaced.]

"Oh Madame!" exclaims Bergamote as he rushes towards the dangling lady with his Trained Askari. 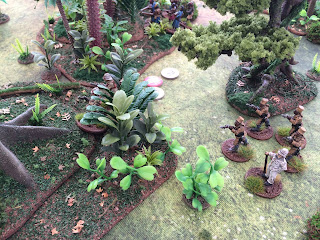 But Mary's problems are not over yet. Ujuwa's Baluchi look on at the spectacle before them and raise their muskets. There is a loud crack of gunpowder accompanied by an awful cloud of acrid smoke, but as the air clears the dangling legs remain intact. Seeing that the ants have returned to their subterranean nest, Mary and her remaining soldier drop to the ground and hastily put shrubbery between themselves and danger. 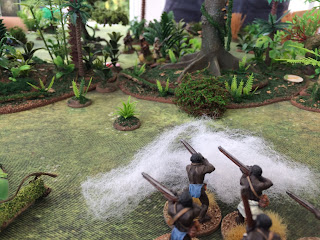 Meanwhile, Mary's Adventurers decide that they are not being very adventurous and with the Askari, they start to advance. 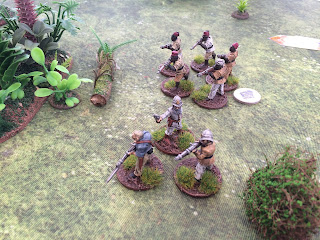 The Ruga Ruga see an opportunity and as they dodge more poisoned darts they stumble upon a dead leopard. Who knows how the animal died, but its pelt will prove valuable. 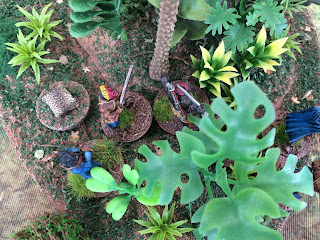 After helping Mary to recover her composure, Bergamote explores amongst the buttresses of the giant tree and finds an artefact of great importance. As the botanist rummages for rare orchids, Ujuwa and his Warriors creep slowly to the edge of the thicket and see that the path ahead is clear. The white woman's camp must be cleansed! 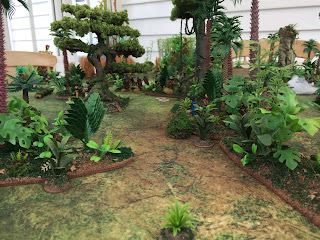 Emerging into a clearing Ujuwa is confronted by Mary's Askari. 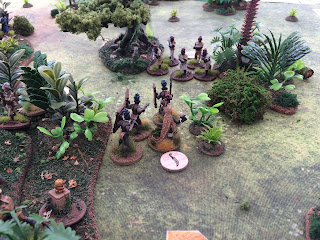 Time for a diversion. Ujuwa leads his men away from the Askari and finds himself staring straight into the faces of Mary's rather startled Adventurers. 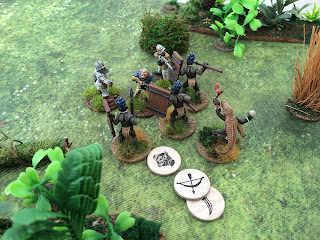 Spears clash with rifles and the Adventurers are forced to retire.

[In fact one of the adventurous would have fallen, but the group's special rule means that by taking two stress tokens they can avoid a single casualty.] 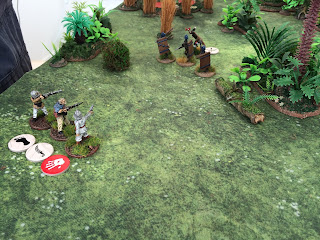 Ujuwa urges his warriors to charge once again. One of Mary's Adventurers is skewered and the remaining two run for their lives.  Seeing his chance, Ujuwa rushes towards Mary's camp.

[The adventurous were forced to take a fifth stress token. Since only 4 such tokens can be taken, this meant that the adventurers had to flee away from Ujuwa's group, opening the way for the witchdoctor to leave the table.] 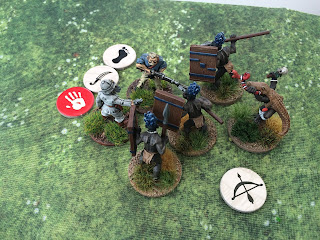 As Ujuwa and his Warriors rush towards the camp, Mary's Askari raise their muskets for one final shot...

But they are startled by a loud noise from the bushes behind them. 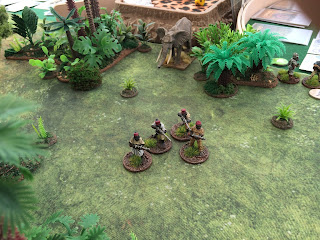 A forest elephant appears from the depths of the jungle.

In what can only be described as a rather spirited decision, the Askari change their target in the hope of bagging a pair of tusks. 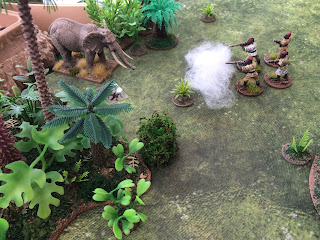 The musket shots whiz past the startled elephant. Enraged, the elephant trumpets and charges the Askari! 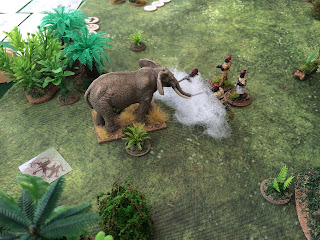 [Elephants are one of the new animal types found in the Throne of Thunder campaign. When in melee the player rolls a D6 to determine how many D10 attacks the elephant makes...] 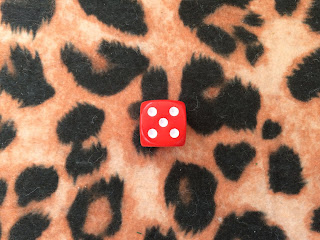 But all is not lost. The Askari manage to dodge the beast's tusks and fall backwards to reload their muskets. But before they can unsling their weapons, the elephant charges them once again. 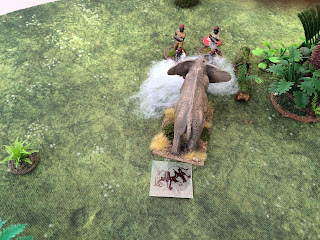 Whilst musket clashes with tusk, a pleasant aroma of fine cooking has perked the interest of Mary's Ruga Ruga who decide to follow their noses into a small clearing amongst the trees.

Looking about them the Ruga Ruga consider the day's events. Poinsoned darts, giant ants and elephants. What else could possibly go wrong?!

"What else indeed!" comes the response from Mary's skewered Adventurer... 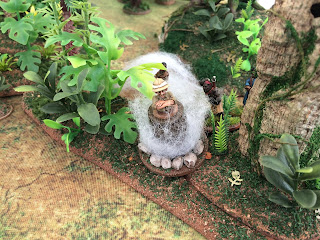 Ujuwa managed to exit the table to cleanse Mary's camp. His Archers also managed to make a discovery of Magical Plants for a total of 19 vp.

Mary's men secured two discoveries and Bergamote found some loot for 10 vp. But the loss of her bearer cost Mary 2 vp so her total came to 8 vp.

Mary has lost this adventure and gained no Knowledge. She remains at level 1, so still has no barter tokens left (or bearers)...

By cleansing Mary's camp, Ujuwa gains one more domain of knowledge. He has plenty of medicinal plants and no need for more warriors. So he decides to brave the fast forest river. Unfortunately, sickness ravages his camp meaning that at the beginning of the next adventure he will have to test each of his groups for casualties. Ujuwa has successfully made 17 Rituals (up 6 from the last game).

Mary chooses to chance her luck with the local villagers. After all, she needs to barter to recover her rather poached adventurer. Although the response from the village is unenthusiastic, she does enlist the aid of two brothers who offer to act as bearers. But negotiations take time and Mary has now spent 20 months on expedition.

Mary has one domain of knowledge whilst Ujuwa now has 3.