The bandwagon has rumbled past Brady HQ and we've jumped onboard! In other words I've recently bought a copy of Frostgrave. 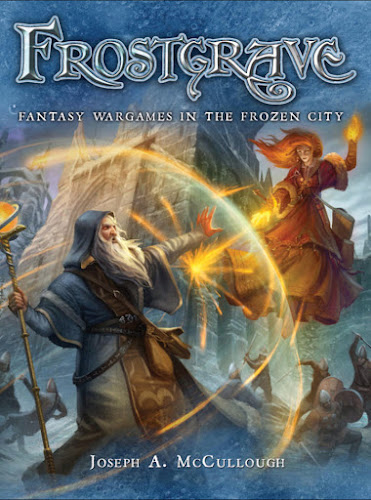 I was (very) late to Mordheim. It came and went during my 20 year gaming break. The concept sounded intriguing, a skirmish game set in a ruined Warhammer city where bands of adventurers searched and fought for treasure. Kyle and I both put warbands together and a mini campaign was suggested at Friday Night Fire Fight Club. It soon fizzled out... Running campaigns is difficult at the best of times, but with Mordheim... The rules are all over the place. Perhaps it's because I had to download PDF copies (the game lost support from GW long ago), but there seemed to be an awful lot of looking things up... My head hurt after a game. Actually my head hurt during a game. Kyle's Dwarfs got stuffed on their first outing and he quickly lost interest. But I still thought the concept was intriguing. It just needed to be a bit (lot) simpler. Perhaps simpler is the wrong word. Games need to flow.

Hold on, what about Frostgrave? From the game's blurb:

"Frostgrave is a game of Wizards, battling through a ruined frozen city in search of magical artefacts."

The city may be frozen rather than smashed by a meteorite but...

I've read several online reviews and battle reports that are mostly positive. So I ordered a copy of the (nicely produced) hardback book and had a good read. I then gave the book to Kyle and he had a good read. We both concluded that Frostgrave is Mordheim Lite - and the 'Lite' part here is key.

Kyle has just moved on from primary school. His new school was supposed to have an after school Warhammer club. Kyle went along only to find that there was only one other student there... And nobody to run the thing. He wasn't too disappointed (he comes along to Friday Night Fire Fight Club with me after all), but I thought it a shame his new friend was left stranded by the lack of support. Enter Frostgrave.

So what are my initial thoughts?

It's cheap. My copy cost less than a tenner (inc postage). It doesn't require huge numbers of figures (a wizard, an apprentice and up to eight additional soldiers per warband) so there's only a small financial/time investment in buying and painting a warband. The gameplay is fast and combat/shooting simple. No tables to look up, just roll a d20 and compare results (with a few modifiers here and there). Turns are broken into phases (wizard, apprentice, soldier, beasts) with initiative rolls determining who goes first. But play moves quickly from one wizard to the other and then to apprentices etc. The action comes thick and fast so there's not much waiting around. There are plenty of spells for wizards to choose from and these really do influence the outcome of the game.

So, it's a cheap game that doesn't require a huge time investment with plenty of action to entice new players, especially younger players.

Are there any downsides? Yes. Quite a few.

Before reading on, remember I think the game achieves what it set out to do - create a simplified Mordheim like skirmish game aimed at younger players.

But the Frostgrave world is rather shallow. There's none of the lavish background that GW used to lovingly pour into Warhammer (before they blew the whole thing up - but I digress). There are no dwarfs. No elves. Or any races other than men. There are creatures in the bestiary, but they are a bit thin really. The stats for some creatures appear a bit odd to me as well. Zombies have armour 12, the same as greater demons. Really? Zombies are too hard to kill, whilst greater demons (in comparison) are not hard enough. Perhaps future supplements will flesh out the world and introduce other races. But that may introduce additional complexity that I suspect the author prefers to avoid.

There are several scenarios in the book that appear interesting, but they are perhaps a bit specific. Rolling randomly for scenarios means that the same ones are likely to come up. There's only so many times you'll want to look for treasure in the living museum I think. Specific scenarios can be fun but should perhaps be in supplements rather than the core rulebook. Additional scenarios are being published by Osprey (a cheap 3 scenario mini campaign is already available as a digital download).

The combat and shooting mechanism is perhaps too simple. We played 2 quick games tonight to test the rules. Who won or lost a melee seemed pretty random. Individual stats don't really influence scores very much. My Templar was hitting with +2 in melee... Against Kyle's newly summoned greater demon with +4. The demon (surely one of the most dangerous things to be encountered), only has a 10% better chance of winning the combat. Hmm. The spells are interesting but appear poorly balanced. Kyle's chances of casting a summon demon spell were the same as my chance to take control of one of his zombies. In our second game he managed to gain a demon, wolf and zombie without too much difficulty. Once spells are selected, they can't be changed. New spells can be learned during a campaign, but I suspect many games will be won or lost due to the initial spell choices.

We found that the game became very bloody, very fast. And perhaps that's all that matters.

I'll be running a game this weekend for Kyle and his new friend. Playing the game tonight made me realise that prerolling on the random encounters table is useful (to ensure figures are immediately available). If the kids take to the game I'll see about easing them into a short campaign. I can think of a few scenarios that would make good use of my new Battle Systems Fantasy Terrain...

Email ThisBlogThis!Share to TwitterShare to FacebookShare to Pinterest
Labels: Frostgrave