Club games at wargame shows are tricky things and the most successful require a considerable amount of effort. This could be because there is an emphasis on creating spectacular terrain or displaying beautifully painted figures. I've been to many shows now and seen really super tables. Some are fantastically original whilst others are based on well known conflicts but just look spectacular. 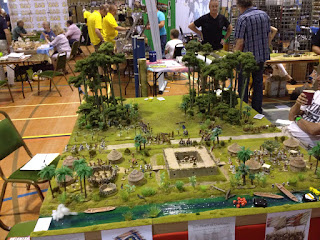 Just one example, this Darkest Africa game at Broadside in 2015 has really superb terrain. I'd love to see this table up close again to get ideas for making realistic jungle!

Games can fall into different categories. Typically games are either demonstration or participation. The difference being that visitors to the show are encouraged to watch the former but get involved in the gameplay with the latter. Sometimes, clubs put on games that don't actually involve anybody playing and simply represent a large diorama.

My preference is to focus on creating a good participation game. Although sometimes, this can become a demonstration game if nobody actually wants to play! With demonstration games, clubs can rely on existing rulesets (even if they are homemade). There is no need to teach anybody how to play (although this can certainly happen). The club members know the rules and the game can progress at a good clip.

Participation games can certainly use existing rulesets and many excellent club games do just that. But I tend to find that it is better to 'simplify' things for games held at shows where participants may be younger or otherwise not experienced with playing wargames. By simplify I mean use a cut down version of the rules to reduce the need for too much looking up. Playing a game that runs along at a reasonable pace helps to keep everybody engaged, especially when multiple players are involved.

Friday Night Fire Fight Club typically attend three shows each year. These include Cavalier in February, Broadside in June and SELWG in October. Our strategy is to try and put on participation games that are either completely original or put a new twist on an existing ruleset or conflict.

Examples of FNFFC games include our take on Rorke's Drift played using SAGA at Cavalier in 2016, Dr. Who at Broadside in 2014 and Vikings against Zombies at SELWG in 2015.

So this rambling preamble brings us on to Broadside 2019 and our game of Dino Safari. 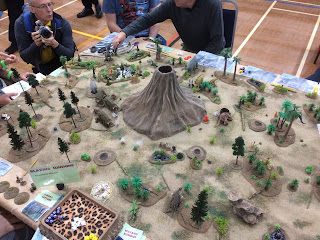 I've already tried to cover the miniatures that feature in the game with some discussion of terrain, but thought that it may also be useful to discuss the rules.

My main design goal was to base the core rules on an established ruleset, but modify the rules to keep the game flowing when several participants are playing.

One of my favourite game systems is Congo and this provided the basis for my rules. I used Congo's stick based range system (for LOS, movement and shooting), the same dice mechanic (d6, d8 and d10 dice to represent worse/better chances of success), similar melee mechanics and very similar terrain mechanics (modified to account for larger figures such as dinosaurs).

The two major changes were to have a simplified activation system (based on a randomised card draw) and to remove the stress mechanic (too many small tokens on the table can bog a participation game down). Players also had only a limited number of figures. This ensured that players could join in with a high risk of being eaten quickly (!) That is, players needn't be too concerned that they would get trapped with the game for too long (hey, people have figure shopping to do you know)!

I also added some extra mechanics that were influenced by rulesets such as Dinomight (spotting rule to allow dinosaurs to ambush and explorers to hide) and Tusk (fire as a hazard). I also borrowed an idea from an old DWMG Weeping Angels scenario for hidden movement of T. rex (using multiple bases only one of which is the real dinosaur).

In truth, nobody hid during our game at Broadside and the predatory dinosaurs didn't attempt to ambush so nobody needed to use the spotting test. Although some fires did eventually appear, these were quite late in the game and so didn't have a significant impact. Still, I'm glad these features were available.

I created mechanics to allow figures to ride in the truck and control the mole. Since the game was centred around an erupting volcano, there was a mechanic to allow the volcano to gradually get more active. Lost World themed special event cards were also created to spice up each turn.

Despite my aim for simplicity there was still a lot going on and the game required some careful organisation. I'm hoping we will be able to run the game at another show in the near future. The main changes I would make are to designate a club member to be responsible for the herbivore dinosaurs and to have the storage boxes better organised under the table (there's a need to add and remove things to the table as the game progresses).

If anybody is interested in seeing the rules (remembering they are intended to be used as a club run participation game), let me know and I can send a pdf.