Traps and Hazards represent events that may be triggered when a unit enters a piece of dangerous terrain during a battle. The event may affect one or more units and may be temporary or last until the end of the battle. Whether a battle uses these cards or the standard MWWBKs rules for dangerous terrain is defined in the scenario. 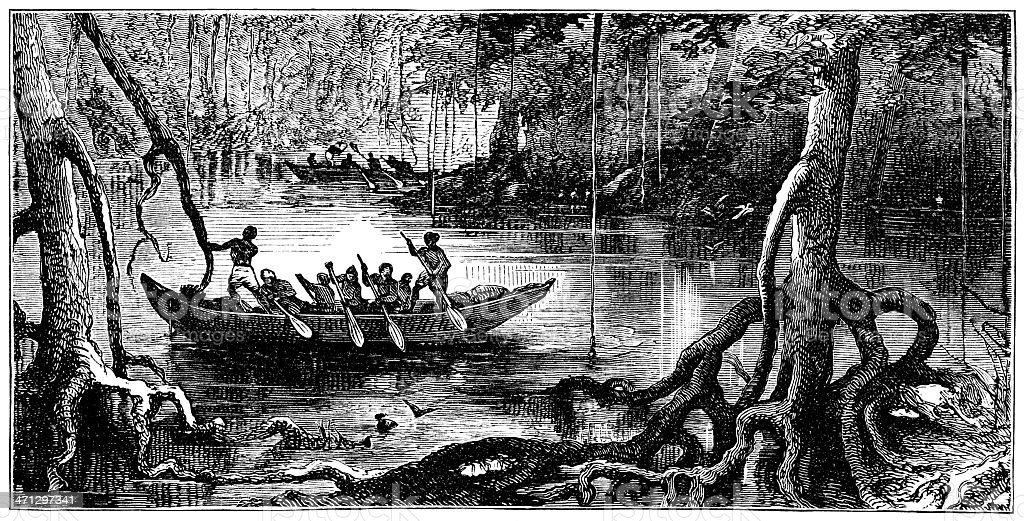 [I made cards for all of these encounters, but you could simply create a table and roll dice instead]

Other encounter decks are planned and will be published once the relevant scenario is played.

This area of terrain is impassible.

Test for dangerous terrain and then place the unit outside of the terrain area at its point of entry.

Quicksand lasts until end of game.

*faq* movement of unit outside of terrain is a retreat, with appropriate penalties if obstructed.

An old bull hippo charges from the pool causing the unit drawing this card to dive for cover.

D6 men are attacked by the hippo. Roll 1d6 for each man. On a roll of 1-2 they are crushed. All surviving figures within the terrain must make immediate pin test.

Regardless of effects, discard this card.

The pool is infested with crocodiles.

The unit drawing this card must make an immediate pin test. Then at the start of each subsequent turn, remove d3 figures from each unit in this terrain (roll for leader casualties as normal). If porters or pack animals are attacked, remove one extra figure. Carried objects are lost.

Crocodiles remain for rest of game.

Your men discover they are covered in large ox leeches.

The unit drawing this card suffers -1 penalty to discipline, fighting and shooting for d3 turns.

Regardless of effects, shuffle this card back into Encounter Deck.

Your men discover a half submerged statue within the pool.

Fetish remains until end of game.

The pool is buzzing with a swarm of blood sucking insects.

All units in this terrain when the card is drawn suffer -1 penalty to discipline, fighting and shooting until they leave the terrain. Regardless of effects, shuffle this card back into Encounter Deck.

A wizened old witchdoctor lives in a hut by the side of the terrain.

All irregular and tribal units within 4" of the terrain suffer -1 penalty to discipline.

*faq* effects last until witch doctor is killed/driven off. Witchdoctor is automatically driven off if attacked.

A large antelope is startled whilst grazing at the water's edge.

The unit drawing this card must make an immediate pin test. If past, the antelope is brought down and one bushmeat object card may be drawn from the Object Deck.

Regardless of effects, discard this card.

Your men disturb a water buffalo.

The buffalo will defend this terrain and attack any figures that approach within 6". Buffalo will move back towards this terrain when possible. Apply other wild animal rules as appropriate.

A huge beast erupts from the water causing confusion amongst your men.

Upon drawing the card, all units within 6" of this terrain must make an immediate pin test with a -1 penalty. Mokele-Mbembe then remains for the rest of the game. Apply creature rules as appropriate.

The deep water is difficult to wade through and the threat of crocodiles makes your men anxious.

The unit drawing this card has its Movement reduced to 1" per turn whilst it remains within this terrain.

Regardless of effects, shuffle this card back into Encounter Deck.

*faq* units may not move At the Double whilst in the Swampy Ground.