Wulfestan ran his finger along the edge of his axe, flinching at the sudden sharp pain.

"It's been over a week Sigered, what do you mean the pagans are still here?"

Sigered looked across at his Thegn.

"They have sent raiding parties far and wide. I don't believe they intend to leave soon".

"Hmm" grumbled Wulfestan, "and what of those we sent back across the marshes?"

The priest shuffled his feet...

"They remain there. It is said a mighty warrior now guards the bridge."

"Send some spears. Let's see how mighty the pagan is when skewered like a Michaelmas hog!"

The Thegn put down his axe and squinted at the holy man.

"They have not returned." 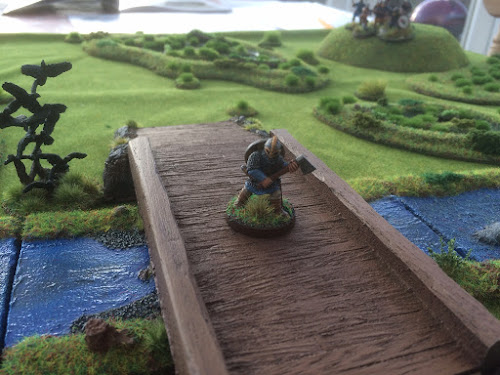 On the far side of the forest stood a bridge. Beyond the bridge lay a dank and noisome marsh. Upon the bridge stood a man. Clad in mail and wielding an axe, the man looked towards the forest, ever vigilant. The man's name was Vandil. On either side of the bridge lay the bodies of Saxon warriors. Their shields sundered and their bodies hacked. 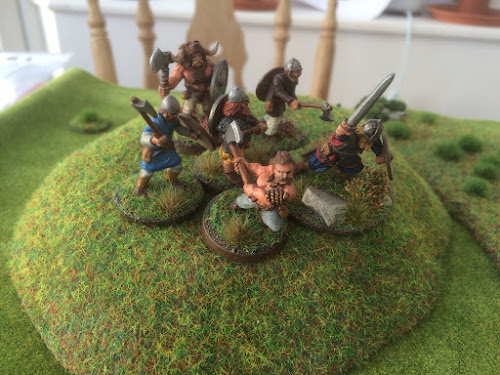 Johan and the rest of his men sat atop a low hill. Their armour and weapons lay about them.

Alongside Ox and the veteran Kalf, Johan was joined by two novices, eager for battle.

"Be calm Ulf" said the Jarl in a soft voice.

"The Saxons sit praying to their one God. They send mere boys to face the mighty Vandil." 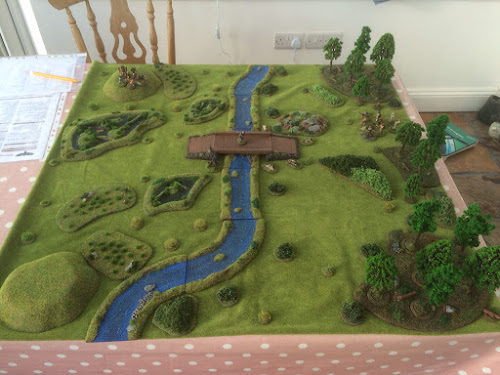 Wulfestan and his warband emerged from the trees. The day had come when these Viking Raiders would be sent back across the sea for good. 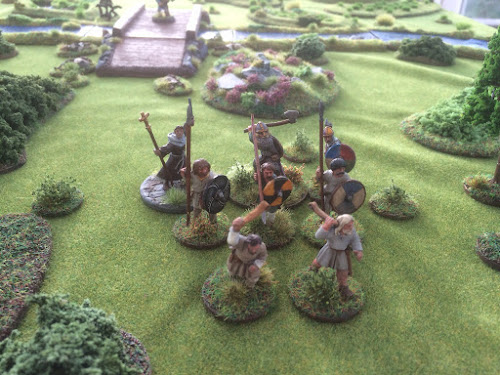 The Thegn was accompanied by Sigered the priest and the beast slaying Huscarle hero, Alric. Alongside them marched three Spearmen and two sling armed Skirmishers. 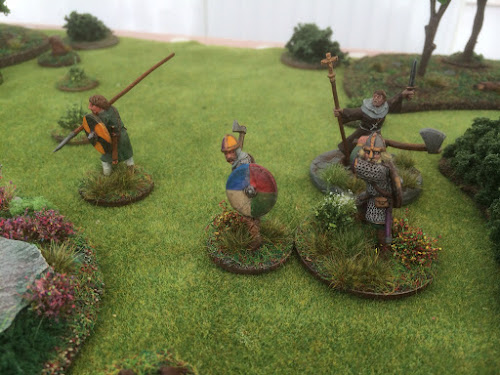 Wulfestan sent a warrior to his right and two warriors and Skirmishers to his left. Ahead stood the bridge. 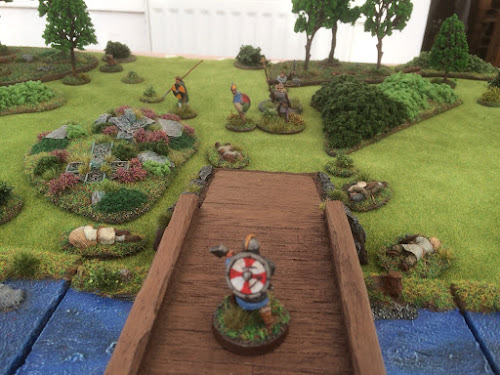 Vandil watched as the Saxons advanced. 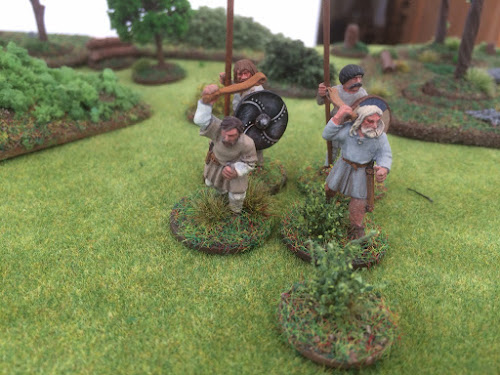 One of the Skirmishers turned to his companion. 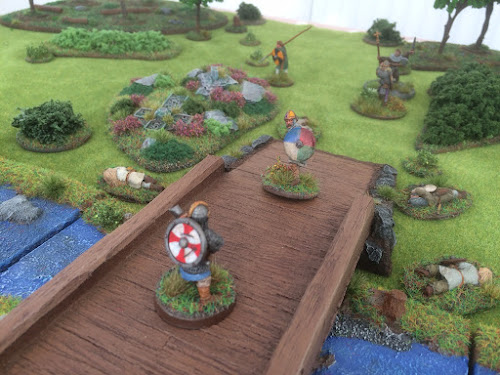 "This honour is mine" exclaimed Alric.

"So be it" said Wulfestan 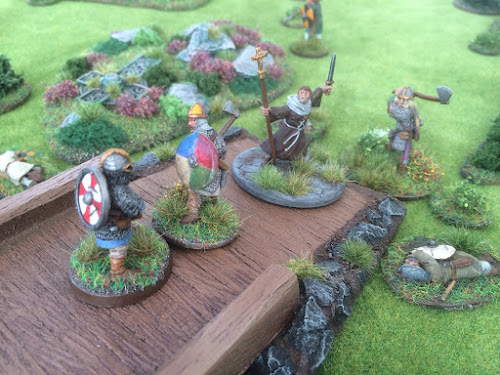 As the two great warriors approached each other, Sigered stepped forward and started to chant blessings. 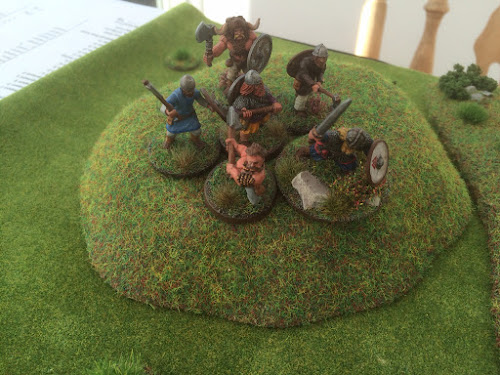 The pagans watched as the two warriors exchanged blows upon the bridge. The Huscarle took aim and attempted to break his opponant's shield. But the blow was deflected.

The Vikings reached for their armour. 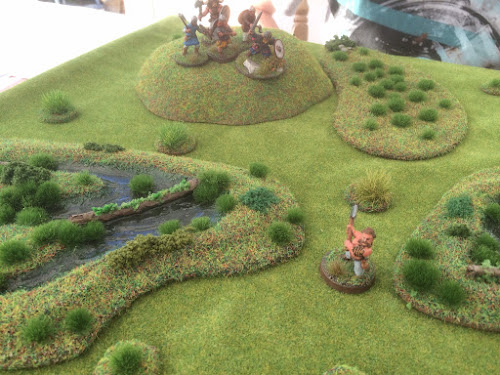 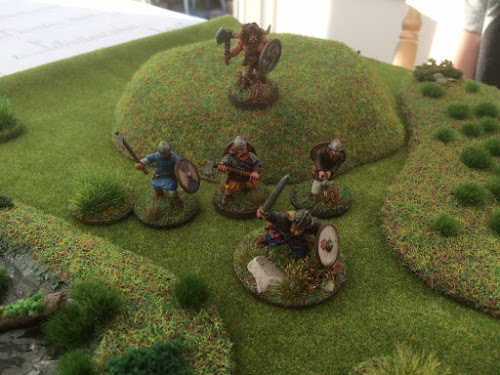 Johan and his men carefully chose their path through the marshes and moved towards the bridge. 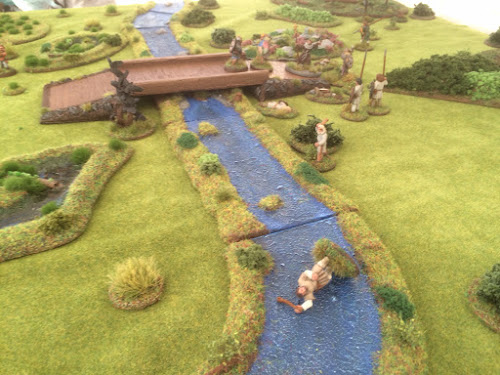 The two Skirmishers ran to the river and with a yell one jumped into the torrent.

"But can you swim?!" shouted his companion.

Without responding, the Saxon sank beneath the surface. 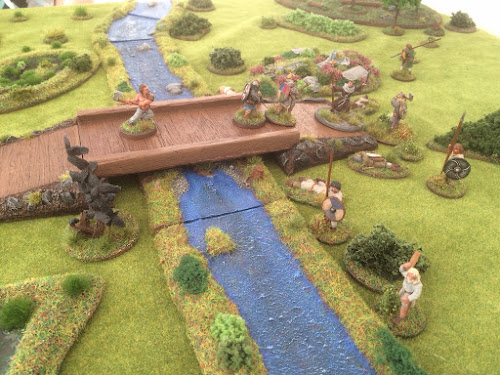 Seeing the half naked berserker charge onto the bridge, the remaining Skirmisher let loose with a volley of stones. But his aim was wide. 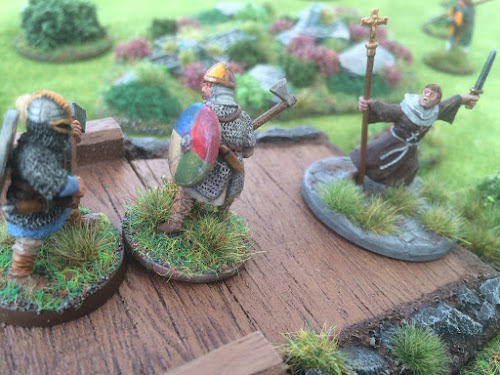 Meanwhile on the bridge, the two warriors continued to exchange blows. Behind the Saxon his priest continued to chant blessings. 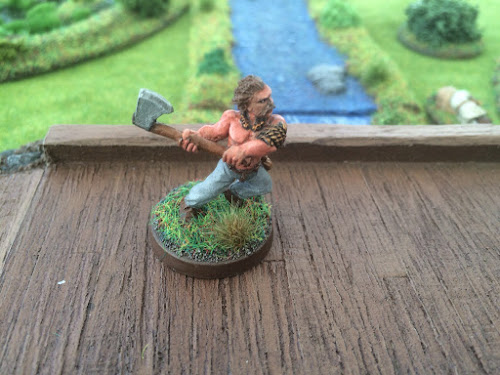 As the berserker raced across the bridge, the Saxon warriors took aim and let fly their spears. But Ulf moved like the wind and the spears flew wide of their mark. 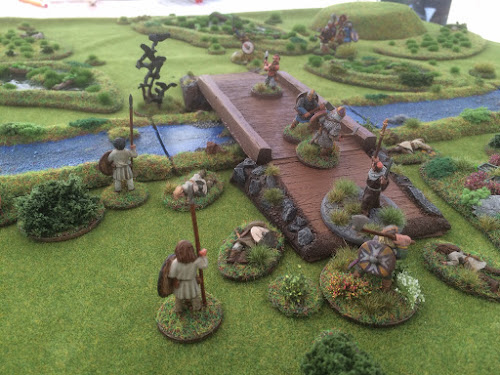 The two warriors on the bridge continued to exchange blows, but each refused to yield. 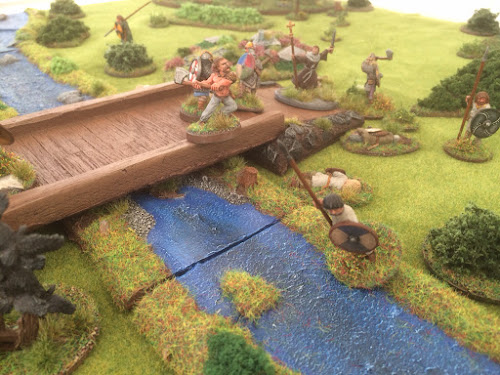 Another Saxon threw himself into the raging waters... 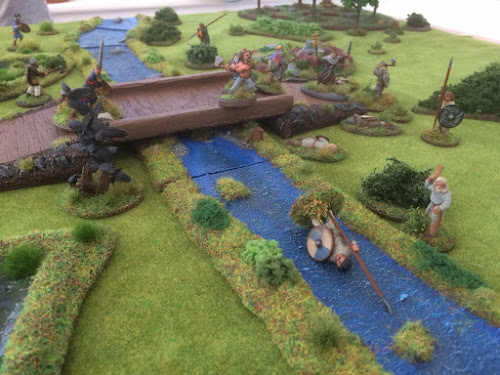 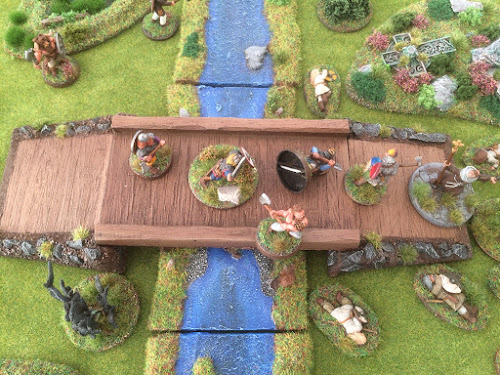 As Johan raced to support Vandil, the Saxon Huscarle suddenly lunged forwards and brought his axe down upon the veteran Viking. Vandil staggered and dropped to his knees. 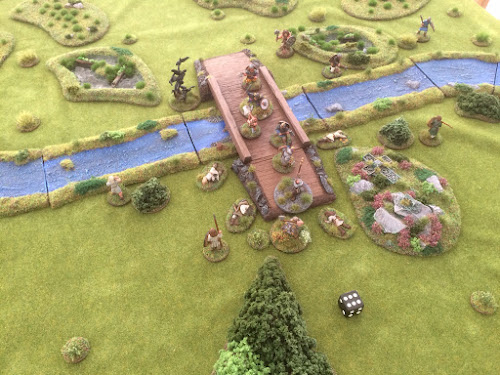 But heroically, he clambered back to his feet and pushed Alric back.

[a single hero point was enough to save the day for the Vikings!] 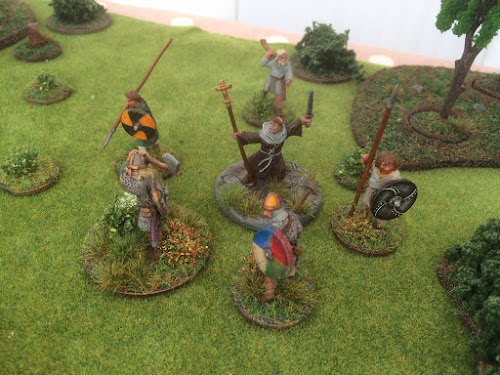 The Saxons withdrew from the bridge and eyed their foe. 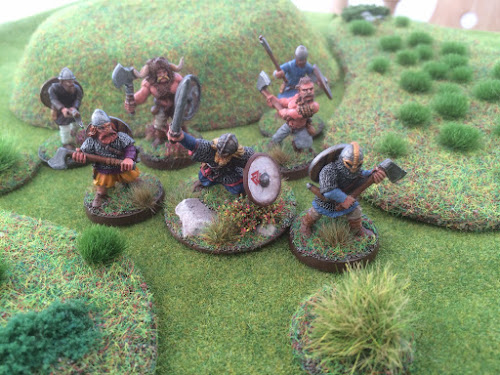 The Norsemen gathered around Vandil, slapping him on the back.

"Let's rid ourselves of these biting flies and return to our ship" cried Johan.

As his adversary disappeared into the mist that blanketed the marsh Wulfestan turned to Sigered.

"Fear not priest, there is more than one path across the marsh."

Get to the Ships!