We once again visited the ginormous extravaganza that is Salute. Unfortunately, my phone was on the blink and since I was giving folks a lift I couldn't risk the battery going - so no photos of the show I'm afraid...

A couple of observations though. Getting in was pretty painless with the online tickets. We arrived just after ten and there were no queues. Lighting is normally awful at Salute, but this year it was perhaps a tad better than last? I still needed my glasses for things that I should be able to see well in normal light though, so it still wasn't ideal. Less people than I remember in previous years? Fewer really large games (although the Boudicca games looked pretty good).

I spent most of the day carefully scrutinising the various traders for bits and bobs that I didn't know I needed till I spotted them (hem)!

All said and done, we had a great time at the show and look forward to going next year. 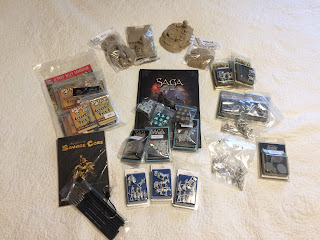 - Saga Age of Magic supplement with dice and spell cards

- Some Ghost Archipelago treasure tokens (I don't really play GA, but thought they would be useful for Congo)

- Various African wild animals (you can never have too many for games set in Africa!)

- Various bits of jungle ruins terrain for Congo and PA, and a druids temple that will be useful in Age of Magic

- Finally, some new brushes. I find that my GW base brushes wear out very quickly so trying something new


There we have it. Oh, one last thing. When I got home I found a golden ticket in my Salute bag! Since we were collecting lots of pre-orders, we rushed around to grab stuff so it could be safely stashed back in the car. Unfortunately this meant I didn't find the golden ticket till I got home... Happily the guys at Salute have said I can still claim the prize - Fifty big ones!

Email ThisBlogThis!Share to TwitterShare to FacebookShare to Pinterest
Labels: Salute