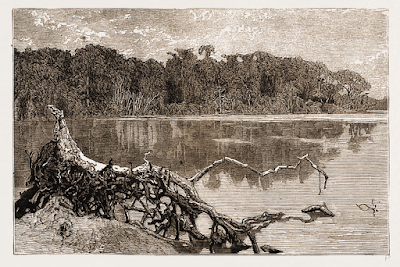 The Arab slavers have a small garrison force protecting the southern approach to the tembe. The troops are stationed in a collection of native huts. Attack is considered unlikely since the approach to the outpost is through thick swampy jungle.

- When an event card is played, do not add any extra areas of terrain to the table if instructed to do so. Event card is still discarded as required.

- The river shallows/margins along this stretch of the Bakambo are marshy with deep sediments and are impassable to all troops.

- Gunboats and dhows are unable to get close enough to the shore to be effective and therefore cannot be deployed in this scenario.

- The land to the east transitions into thick swampy jungle that is impassable to all troops. Isolated pockets of jungle terrain are difficult and dangerous.

- Two small streams drain into the Bakambo River. The streams can be forded but should be treated as obstacles (MWWBKs pg. 22).

- Between the streams is an area of swampy ground interspersed by tall grass and thick thorn scrub. Scrub is impassable.

- Five swamp terrain areas are placed between the streams. All swamp areas are difficult and dangerous.

- Several termite and acacia topped low hills are located in the marsh. The hills block line of sight. Acacia trees and termite mounds are simply decoration and can be moved to allow troop placement as required.

- Wilkinson sets up his force at the southern table edge and is determined to push on through the swamp to breakout on the opposite northern table edge.

- The Arab slaver position includes three huts. Unknown to Wilkinson, three half strength units of Ruga Ruga are sleeping in the huts. Nyungu (Ruga Ruga leader) is attached to one of these sleeping units. A full unit of poorly equipped Askari is on patrol and can be placed anywhere on the Arab slaver’s side of the table. At the beginning of the game this unit counts as leaderless. 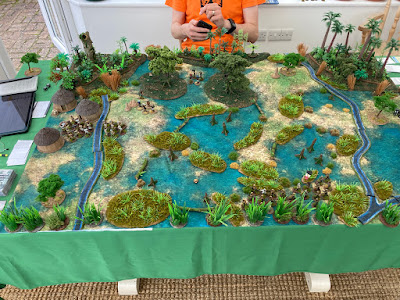 - An expedition unit is activated first each turn.

- The area between the streams is dense vegetation and restricts command ranges of regular and irregular leaders.

- Huts. Hard cover, counts as defended structure. May each be occupied by unit of 8 figures or less. Each building has 10 structure points (see pg. 47). Buildings may be directly attacked or set on fire.

- Each building has 1x random object associated with it (place baggage token by each hut). If a hut is successfully raided without being set alight, the attacking unit may draw one object card from Arab Baggage Deck. Regardless of how many huts are raided, the three objects only count as a single item of static baggage when rolling for tembe supplies. To raid an unoccupied hut, the attacker simply needs to move into contact with the hut.

- A unit attempting to enter or move within a dangerous terrain area that does not have an active encounter in play must roll a d6. On a roll of 1-5 the unit draws a card from the appropriate Encounter Deck. Units accompanied by a Scout may add 1 to the roll.

- Mokele-Mbembe can move through scrub but treats all such terrain as difficult.

- The slaver unit on watch will attempt to raise the alarm if it sees an expedition unit or is alerted by gunfire etc. To raise the alarm, the unit must move into base contact with a hut(s).

- The alarm may also be raised if the sleeping units are awoken by gunfire or fighting. If any unit fires/fights roll 1d6 for each hut. The alarm is raised on a roll of:

2+ firing/fighting unit is within 9” of the hut

- The three sleeping units can only be activated after the alarm is raised.

- The slavers are not expecting trouble and are likely to retire in the face of overwhelming firepower. If a unit fails an order test after a successful Rally, the unit will use future activations attempting to retire from the northern table edge.

- A unit is considered to have escaped/retired and is removed from play when one figure exits the table.

- A unit does not count as escaped/retired if it is forced to retreat from the table.

- Play continues until only one field force remains on the table or when any of the standard conditions in MWWBKs Ending the Game apply (pg. 26).

- If Wilkinson gains more VP than the slavers, he has successfully crossed the swamp without being delayed. Before the current Campaign Turn ends Wilkinson may look at the next Campaign Card and if it is not a scenario he may choose whether or not to encounter it. If Wilkinson chooses to ignore a drawn card it is discarded without effect. If the drawn card is a scenario Wilkinson must encounter it. But he may choose to fight the battle either immediately or strike camp and wait until the next Campaign Turn. Apply Nightfall event card rules if battle is fought before striking camp.

- If Wilkinson scores more VP than the slavers, local tribes welcome the expedition and territory changes to friendly.

- In the case of a draw, Wilkinson strikes camp and play continues as normal.

+3 every unit above half strength that exits the table

+1 each enemy combat unit destroyed or forced to retreat from the table.