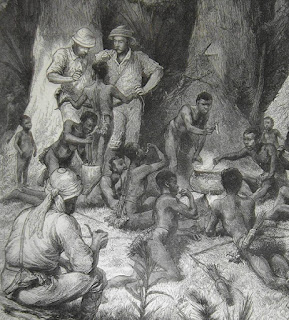 Various tribal units that may be encountered during scenarios:

-Pygmy Warriors x 16: tribal infantry; fierce; well-armed sharpshooters (thrown spear); use poison: post battle roll suffers -1 penalty; skilled skirmishers: may either move at full rate and fire with half figures or fire with all figures and move at half rate, other skirmishing rules apply; (7 pts)

- Warrior Fanatics x 16: tribal infantry, fierce, fanatics: free actions are At the Double and Attack. Stand To is ordered action. Must move At the Double towards a visible enemy and Attack closest enemy unit in range; to the death: Never take pin test or receive pins through any means; (7 pts)

[Design Note: Some of these units are very strong and encountering several of them at full strength would likely cause Wilkinson something of a headache. I've therefore been careful to balance scenarios. We want the scenarios to be challenging but don't want Wilkinson to get slaughtered in his first action. Units can therefore be fielded at half strength (or even fewer). To do this I simply reduce the points cost of the unit as appropriate. So a half strength unit of cannibals will cost just 3 pts etc.]