Terrain is an essential element of any wargame - whether it's a custom designed table or a green mat with various bits and pieces scattered across the surface. But striking a balance between realism and functionality can be an issue. Moving small soldiers across a wonderfully intricate landscape can be an exercise in frustration. Figures can slide down hillsides, fall off boulders or simply refuse to stand on rocky ground. More functional terrain enables deployment of troops, but can look a little bland. So what to do?

This is an issue I've been thinking about for some time now and I think I finally have a solution (well, a solution that works for me). If you remember our SAGA table at SELWG... 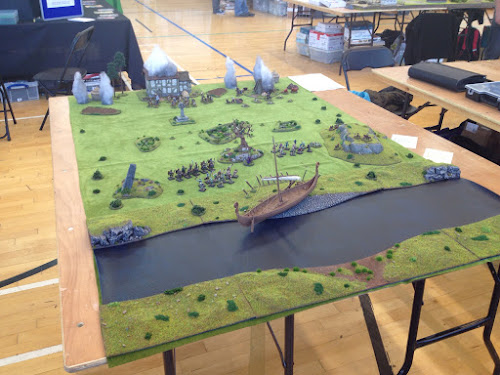 You'll see that there are a number of items of scatter terrain (buildings, marshes, hills etc), that conform to SAGA standards (in terms of area etc). The table was also 'dressed' with a number of purely scenic elements that included items such as burning haystacks, baggage (and a great stonking Viking ship of course!). These scenic elements included a number of bushes and trees that are individually based. These are useful for giving character to large areas of otherwise featureless grassland - but can be easily moved aside if they get in the way of figure placement. But there's something else there as well. The river.

The river functions as both a scenery element and terrain piece, but is much larger than most pieces of scatter terrain. I don't just mean that it goes from one side of the table to the other either! The shorelines have depth and help to cover some of the otherwise bland grassland mat.

I've decided to adopt a similar approach to other items of terrain - starting with woodland. 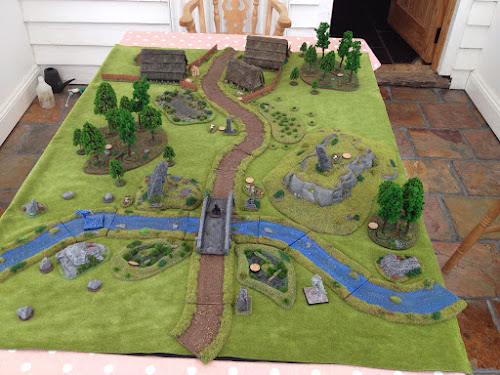 Here's the table from a the game of Frostgrave that I ran last year for Kyle and one of his friends. You can see there are three woodland terrain pieces. Trees are individually based allowing them to be removed from the woodland scatter terrain to permit placement of figures. These small areas of woodland are great for small scale skirmish games, but don't really look very impressive. When grouped together, areas of green mat still show so it's difficult to give the illusion of forest. But creating a huge area of woodland terrain would be a massive undertaking and perhaps not a great use of my limited time, especially since it would only be used for a relatively small number of games.

One option is to use a large piece of green felt (or similar) - functional but perhaps a bit uninspiring. My solution is to create a scenic baseboard on which the smaller woodland pieces can be placed. Once assembled this will then give the illusion of a much larger area of forest - but won't actually require any more trees. The baseboard will simply fill in the gaps between the existing scatter terrain. Individual trees or even whole chunks of woodland can then be removed to allow movement of figures. I'm currently putting terrain and figures together for a Hail Caesar scenario published on 1000 Foot General. In this game Romans are marching through a forest to attack a Celt village. The forest covers two of the table corners. 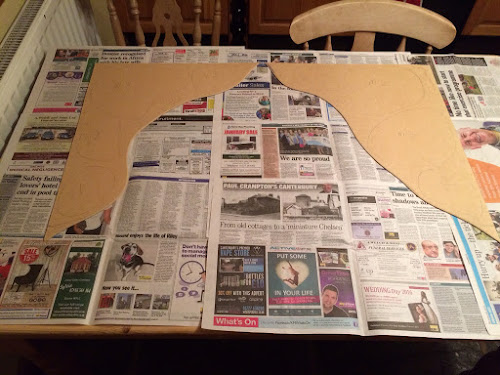 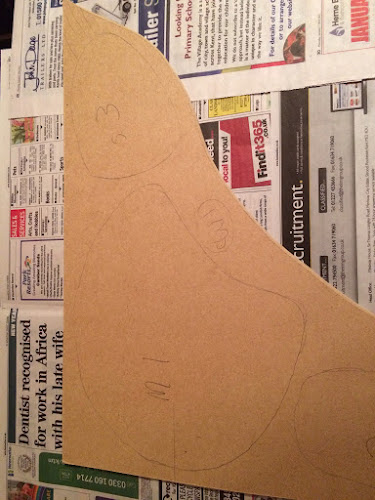 Each of the individual areas of woodland is marked on the boards. The rest of the board will be sanded, painted and flocked to match. Hopefully, this will allow me to use much larger pieces of terrain with minimal extra effort. The terrain can also be stored easily (since it will be relatively flat, just like the river shorelines). Anyway, this is a work in progress so it remains to be seen how good the finished item will actually look!