Bring Out Your Lead

I've not been able to perk much interest in playing Warhammer at the local club. Not even 3rd (or 2nd) editions. It's not a huge issue since the other games we do play at the club are all very enjoyable. I have been itching to get the undead marching across the battlefield though. Fortunately a couple of folks have started to get into Kings of War. Although the rules appear to be simple (no bad thing) and there is very little narrative depth (boo!), it does provide an excuse to get Vlad and the Shamblers, er shambling once again. 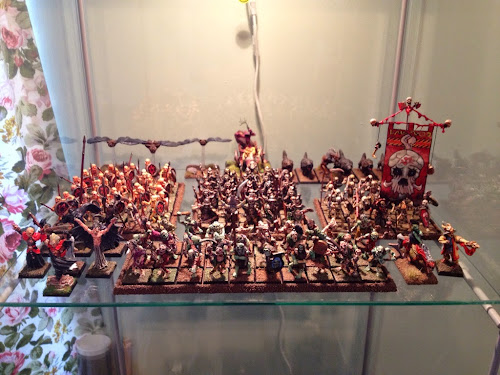 The first couple of games have been fun, but I've played from the perspective of 'what painted figures can I use this week?' - rather than thinking about an actual army. After all most of my effort with undead is geared towards completing a Warhammer force for 3rd edition. My Warhammer force has lots of zombies and skeletons. Not only does this fit in with the narrative of my games, but also plays to the strength of undead in Warhammer. In my last 3rd edition Warhammer game the undead routed my opponent's Norse off the table. Enemy units are automatically routed if they suffer more wounds in melee. Not so in KoW. In KoW units don't even get to fight back if charged - that's taken a bit of getting used to! KoW is a game about strategic manoeuvring of units to ensure the enemy can be charged first.

The last game was fun but I did start to feel constrained by what painted figures I had available. I can't use my 30 skeleton spearman. I can use them in a unit of 20. Or as a 40 strong horde. But not 30. Units of 20 skeletons are not very effective in combat and since KoW doesn't use psychology, the undead don't cause fear in their opponents. Hmmm...

I need to look at this a little differently. Wraiths and wights would be interesting but I only have three painted wraiths and the minimum number for KoW is five. Perhaps I should view KoW as an opportunity to paint figures that I might not have painted if I was only trying to finish my Warhammer army. I've started this by assembling the Mantic werewolves. But perhaps it's time to raid the old lead box... 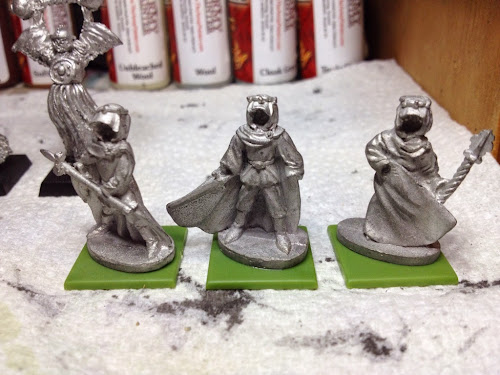 Three old (Grenadier?) wraiths attached to modern Renedra bases before being undercoated. In KoW, wraiths can fly with a movement of 10, 20 on a charge. What about the nasty hydra thingie that Mike used in his last game. It had a defence of 6 and proved a difficult nut to crack, even for my Revenant unit (KoW equivalents to Black Knights). 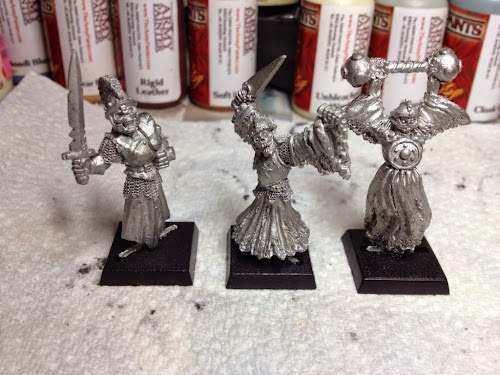 I've wanted to paint these old barrow wights for a long time. With a crushing strength of 4 (ie. the enemy unit's defence is reduced by 4), they might just put that hydra in its place. Once painted, these old models can join my Warhammer 3rd edition army as part of the spirit host.

I have another trick up my sleeve as well, but I'll save that for later.

Thought it worth mentioning that a few folks have offered opinions on the lack of narrative in KoW and what it is that makes Oldhammer an enjoyable narrative driven game. Paul Brown over at Here Be XP gives his thoughts on how different rulesets can be used to play games in the style of Oldhammer. Worth a read. I definitely agree with his first two points about characters and characterful units (my skeletons and zombies are frightening I tell you!). On the Oldhammer forum Leromides suggests that KoW could be used to conduct large strategic battles in campaigns along the vein of Mighty Empires. Again worth thinking about. I have the Generals Compendium and it offers similar ideas for Warhammer (map based campaigns), but these could just as easily be applied to KoW.