Next Up On the Painting Table

As I've previously explained, I usually have several projects on the go. These are often from several different game systems. Painting may focus on getting a particular set of figures completed for a specific game or just because I like a figure with no intention of using the model anytime soon. My Varghulf falls into the latter category and has been sat on the table for quite a few weeks now. Unfortunately he will have to stay there a while longer. My current focus is Anglo Danes for SAGA and werewolves for Kings of War. I now have 5 points of Anglo Danes, with one point of levy left to do. 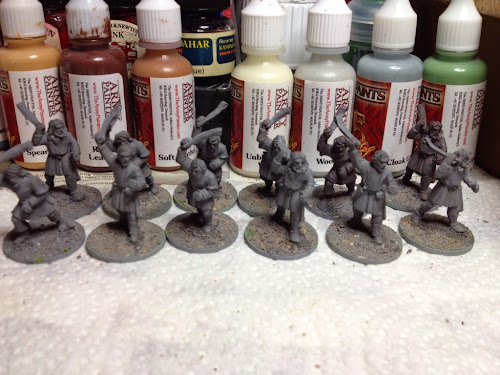 The rather well muscled werewolves I recently purchased have now been assembled. 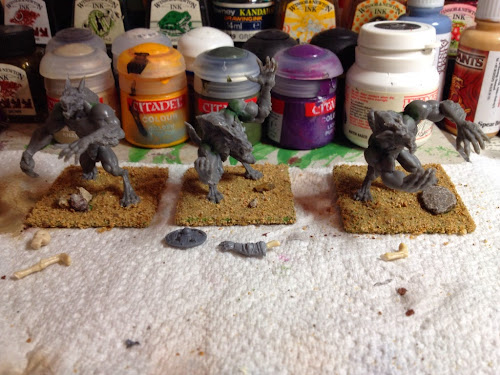 A couple of things worth mentioning about these Mantic figures. Firstly, they have very small heads! I must admit that I prefer my werewolves big headed... Secondly, they had horrible mold lines that I still haven't removed properly and believe me I've spent a fair bit of time scraping... You'll notice a few arms, bones and a tattered shield in the foreground. I'll be using these to liven up the bases. The shield is from GW's skeletons box set (the recent one). The werewolves will be under coated in the morning and I'll be taking them along to the Friday Night Firefight Club to feast on some of Mike's Twilight Kin - that's Dark Elves to all you Warhammer fans ;-)