This is a terrific little campaign in issue 270 of Wargames Illustrated (pp. 98-107) that has a British expeditionary force travelling along a fictional river to stem the influence of local slavers. 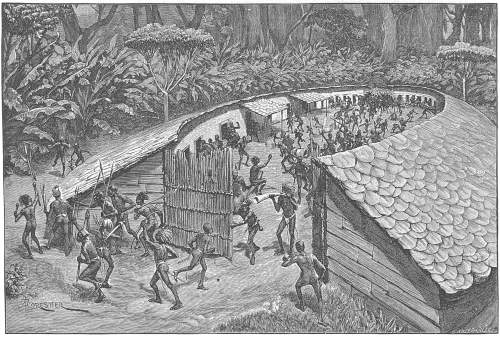 As written the campaign is designed for In the Heart of Africa, but it could easily be adapted for Death in the Dark Continent. I'm currently converting the campaign into something more suitable for The Men Who Would Be Kings (MWWBKs).

Individual battles are fought using MWWBKs, but the remainder of the campaign is driven by scenario and special event cards. These rules expand on the campaign published in Wargames Illustrated. So full credit should go to the author Garry Chalk. To play the campaign you will need to refer to the original article.

If a non baggage unit is required to carry an object that is obtained during a scenario, this must only be temporary. Objects must be transferred to baggage after the battle. Figures carrying objects may not fight or shoot. Any objects that are found but not collected whilst playing a scenario can only be taken if the expedition controls the table after the battle.

Tembe Supplies
Available supplies in the slavers’ tembe are tracked throughout the campaign. Supply levels will determine slaver morale and available ammunition in the final scenario. Supplies may increase or decrease due to various events as the campaign progresses. At the start of the campaign the Arab slaver player should roll 1d6 to determine the initial supply level modifier:
1         Supply levels low (-1)
2 - 5    Normal supply levels (0)
6         Plentiful supplies (+1)
[Design Note. This is one of several mechanisms to help ensure that the outcome of individual battles will influence the final assault on the tembe. By attacking the slavers’ baggage Wilkinson may find objects of value, rescue captives and decrease resources available at the tembe.]
Equipping the Expedition
Encumbrance limits for baggage are detailed more fully here. To summarise: Wilkinson is allowed one free baggage unit per eight points of field force. A baggage unit consists of either four porters (each figure carries one object), two pack animals (each figure carries three objects) or one heavy ox wagon (carries eight objects).
At the start of the campaign Wilkinson should select objects from the following list of expedition supplies (he can refer to the object cards if he wishes).
8 x Cases of Ammunition
8 x Army Rations
2 x Barrel of Rum
4 x Animal Forage
1 x Tents
1 x Medicine Chest
4 x Glass Beaded Necklaces
4 x Brass Wire
These objects include important supplies for the expedition and there will be consequences for the expedition if they are lost. Although they may take up valuable space a few trade goods may prove useful for bartering with local people. Extra supplies including spare tents are carried on the gunboat. Some supplies may also be available at McKenzies Trading Post.
When making his selection Wilkinson should be reminded that one Cases of Ammunition object card is discarded at the end of each battle. One Food object card and one Animal Forage object card are discarded at the end of each Campaign Turn (see section on Campaign Turn below).
Expedition Bonus Card
"Now Listen Up Chaps!" is a bonus card that is given to Wilkinson at the start of the campaign and may only be played once, before any battle. The card provides a morale bonus to the troops, but if used it will cost Wilkinson -2 Campaign Points. Use wisely!
"Now Listen up Chaps!" Expedition Bonus Card
Keep and play as required.
Seeing that your men are flagging you may discard this card to give them a pep talk. The Discipline of all Regular units receives a +1 bonus until the end of the Campaign Turn. If the expedition still carries a barrel of rum it is opened and your words of encouragement seem to be particularly well received. The Discipline of all units receives an additional +1 bonus until the end of the Campaign Turn.
Expedition Subplots
There are several side quests that Wilkinson may be distracted by whilst he attempts to defeat the slavers. These subplots can be triggered in different ways. Some require the expedition to find a specific object and/or special character, others depend upon a Random Event Card being drawn. The players can choose to increase or decrease the likelihood that one of these subplots will occur depending on whether they prefer the campaign to be more historical or enjoy including pulp like content. Optional rules for the various subplots are included with relevant scenarios.

Players are advised not to include too many subplots in the campaign! Some quests may prove challenging and Wilkinson does have a tembe to deal with after all…

Two introductory subplots involve escorting a lady and assisting a film crew.
Miss Jenkins
Miss Jenkins is on her way back to her father's mission and requires an escort. She is a special character that Wilkinson may choose to escort when equipping his expedition. There are bonuses for delivering her safely to the mission, but also consequences if she comes to harm. Use the MWWBKs Escorted Lady special rule for Miss Jenkins. Of course, the presence of Miss Jenkins may lead to other unexpected events…
Film Crew
A pioneering film crew aims to bring the perils of Darkest Africa to the streets of London via the newfangled silver screen. At the start of the campaign roll 1d6:

1     Wilkinson’s orders require him to take the film crew at start of campaign.

2-3  Wilkinson may choose to take film crew at start of campaign.

The film crew are represented by a group of four suitable figures and treated as an additional baggage unit. They have enough of their own equipment to manage so can't act as porters to carry other objects. All other baggage rules apply.

Campaign Turn
The campaign is played over a number of turns that involve individual battles played using the MWWBKs rules. Battles are interspersed with various random events that might befall Wilkinson's expedition.
Each Campaign Turn includes a number of phases when different actions are undertaken. After starting a new Campaign Turn Wilkinson draws a card from the bottom of the Campaign Deck. Cards and their effects continue to be applied until a scenario card is drawn and the specified battle is fought. At the end of the battle casualties are counted and one Cases of Ammunition object card is discarded. Wilkinson then strikes camp and must discard one Food and one Animal Forage object cards. This represents one complete Campaign Turn.
Immediately before drawing a card from the Campaign Deck, Wilkinson may choose to strike camp early to end the current Campaign Turn. The Campaign Turn may also end early due to the effects of an event card or scenario.
A typical campaign will likely include 4 - 7 Campaign Turns that will include a similar number of battles.
Step by step guide to Campaign Turn Phases and Actions.
Scenario Turn
A full Scenario Turn includes both Wilkinson's and his opponent's turn in a MWWBKs battle.
In a normal MWWBKs game, each player activates all of their units with play then passing to their opponent who activates all of their units. In this campaign, the attacking player activates one unit. Regardless of whether the unit passes its leadership test, play then passes to the defending player who activates one unit. Play continues to alternate between players until all units have been activated.
[Design Note: this alternate activation helps to balance one or two of the scenarios that were originally designed for a rules system that uses a similar mechanism.]
Counting Casualties
After each battle Wilkinson should roll 1d6 for each casualty in a unit to determine if they are really dead or merely stunned or lightly wounded. On a roll of 1-4 the casualty is dead and permanently removed from the campaign. On a roll of 5-6 the figure is deemed to have recovered and rejoins its unit. This does not apply to baggage units that are always destroyed if captured.
Any figures in units that fail to Rally or have been forced to retreat off the table are also rolled for. On a roll of 1-2 they are considered lost or dead. On a roll of 3-6 they have found their way back to the expedition.
Arab slaver forces are listed for each scenario. Leader and baggage casualties must be noted, but troop casualties only need to be recorded if specified by the scenario.
Back to contents