After successfully seeing off one Viking warband, the hard as iron Anglo-Dane Huscarls were cleaning their mighty Dane axes when word came of another incursion by the vicious Vikings, this time led by the Mighty Kyle... 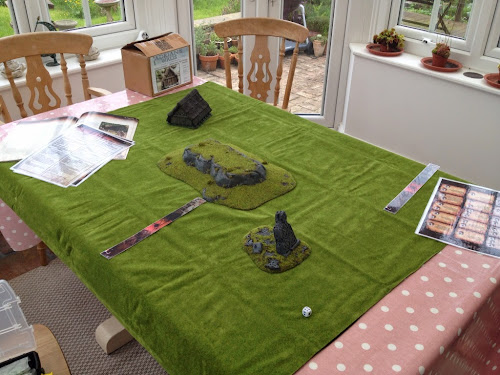 My Anglo-Danes' defensive abilities can be boosted by terrain whereas Kyle's Vikings just like to rush across the table as a yelling mass and get stuck in. Mighty Kyle therefore opted for just one piece of terrain compared to my five. As per the SAGA rules we added them together and divided by two, resulting in the selection of three pieces of terrain. I chose a steep inclination (ie the GW hill I recently painted) and some rocky ground (represented by some Celtic Ruins produced by Fenris Games). Mighty Kyle selected a warlord's hut (a nice pre-painted dwelling, purchased from Adrian's Walls at SALUTE 2014). The Anglo-Danes were planning on deploying levy armed with slings and hoped the hill would offer a commanding position. A D6 was rolled and the hill was placed in the centre of the table, perfect! Or was it... The other two terrain pieces were placed with at least part of them located within L of a corner. The battlefield was set and an epic Clash of Warlords would follow.

After deciding on table edges and rolling two more D6, the righteous Anglo-Danes started to deploy first. I was careful to place the levy as close as possible to the hill, with the warlord close by to ensure they could be activated at least once in their first turn. The levy were supported by an eight strong unit of Dane axe armed huscarls (hearthguard; Anglo-Dane elite troops), with another smaller unit of more conventially armed huscarls protecting their flank. A single unit of (painted!) warriors guarded the other flank of the hill, with another sword armed four man huscarl unit in support. 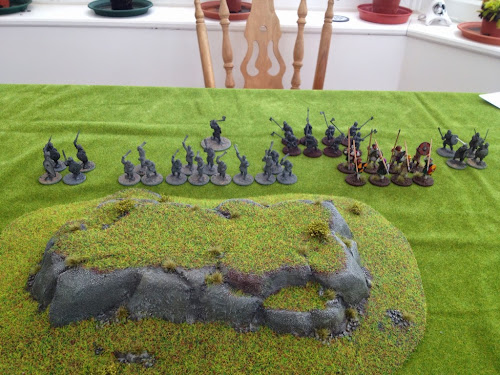 Mighty Kyle deployed a fearsome unit of eight slavering Hirdmen (Viking hearthguard) who stood looking up at the sweet smelling grass atop the hill, whilst a filthy group of spear armed warriors stood idly by picking food out of their straggly beards. Mighty Kyle's warlord cowered behind his barely human berserkers, with a four strong unit of Hirdman and yet more warriors in close proximity. 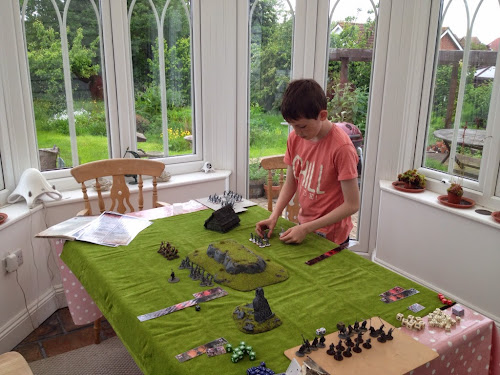 Ha, it looked like the heathens had not brought any archers! My right thinking Christian warlord would make the blond haired vagabonds pay dearly for that oversight. Of course there's not much Mighty Kyle could do about this situation since I haven't actually made up any Viking levy yet. But that wasn't going to stop me taking advantage of the situation... 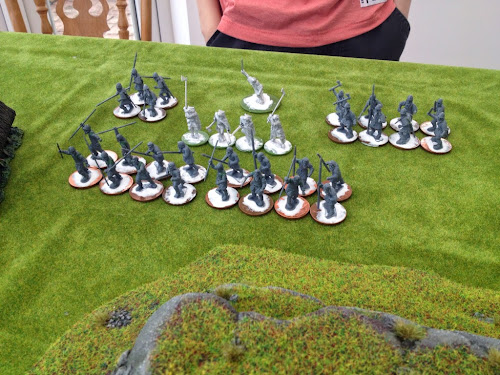 The dice were cast and the heathen gods spoke, the vicious Vikings moved first and it looked like they were set for an all out offensive on my hill! Fortunately it appeared they had had a late night and they moved like overfed swine whilst Mighty Kyle wasted resources trying to activate too many units. The steep inclination slowed movement of the Hirdmen and warriors to S. This together with intimidation from the Anglo-Danes prevented their ascent of the summit and they were left floundering amongst the scree.


I cast my dice for the Anglo-Danes and concentrated effort on activating the levy. The warlord's free activation got the levy off to a good start and they charged towards the hill. Another activation saw them climb and whilst fatigued, they reached the top! The levy viewed the scene before them, collected some suitably sized rocks and prepared their slings. Mighty Kyle had left his warlord and flea-ridden berserkers in full view! Since the Viking warlord was better armoured against ranged weapons, the levy took aim at the berserkers. Despite being tired by their climb (in other words Kyle spent their fatigue making his beserkers harder to hit), the rocks struck home and two of the Viking brutes dropped dead! Blood had been spilt and the Vikings were suitably enraged!! Next turn, Mighty Kyle spent his resources wisely and the warriors charged up the slope. The levy held firm and formed a shield wall, killing a warrior and forcing the remainder to disengage. As the remaining seven warriors stumbled backwards they were berated by the Viking Hirdmen who ran past them ploughing into the levy with the power of Thor! This was too much for the unarmoured levy and they were slaughtered to the last man. The Vikings now had control of the high ground. 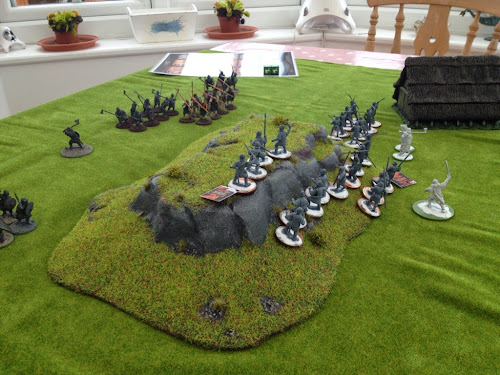 The Anglo-Dane warlord was dismayed by this loss and suddenly noticed he was a bit exposed! It was at about this point he also noticed the two dice still sat on his battle board and realised he had forgotten to trap the Vikings! Yes forgotten! Two helmets worth of dice and they hadn't been played!! The viking warriors finally reached the summit and the view from the Anglo-Dane shield wall was now a bit less encouraging. 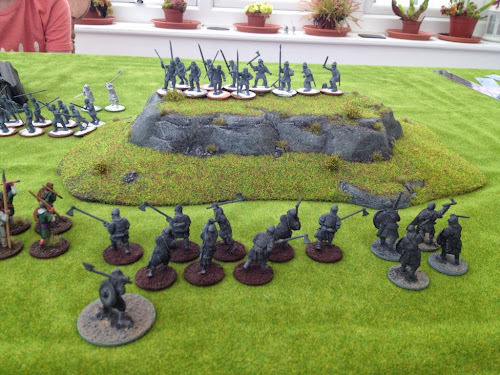 Still, it's not over till the fat monk finishes his last manuscript (or something), so it was time to regroup. 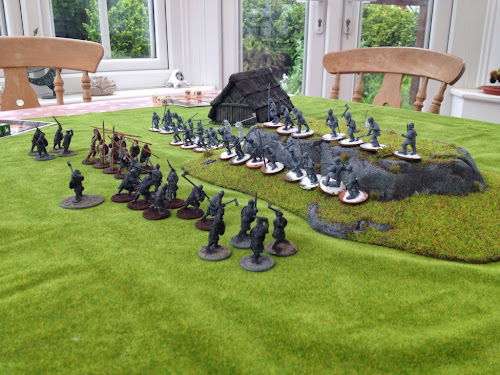 In the face of a charging mass of Scandinavians, the stout huscarls formed a new shield wall at the foot of the hill. The Anglo-Dane warriors also did their bit and utilising Lords of Battle charged their counterparts, killing four and forcing the exhausted Vikings to scramble backwards. The Vikings made it to the top of the hill, but would never recover from their exhausted state. 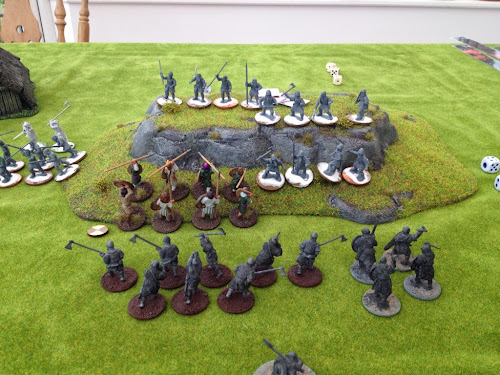 Unfortunately another unit of Viking warriors sneaked around the base of the hill to attack. Four Anglo-Dane warriors fell and the rest stumbled away, now finding themselves staring up at Mighty Kyle's hairy Hirdmen. 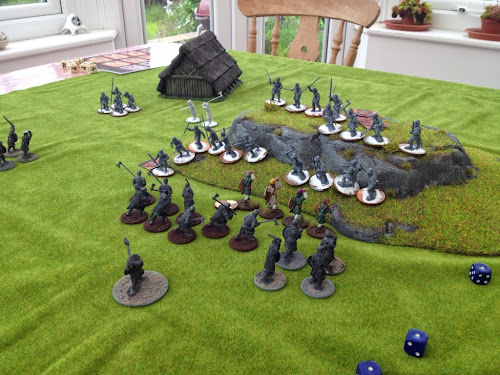 Yes, that's three ones btw (and yes I was rolling the blue dice)...

The Anglo-Dane huscarls were not going to stand for that insult, so in they went! The Dane axes came down and the Viking warriors were nothing more than a memory. Unfortunately two brave huscarls also fell. Worst still, the fleeing Anglo-Dane warriors were slaughtered by Mighty Kyle's Hirdmen. Things were starting to look grim for the Anglo-Danes, so another unit of huscarls were activated and bringing forth Lords of Battle, engaged the Hirdmen. 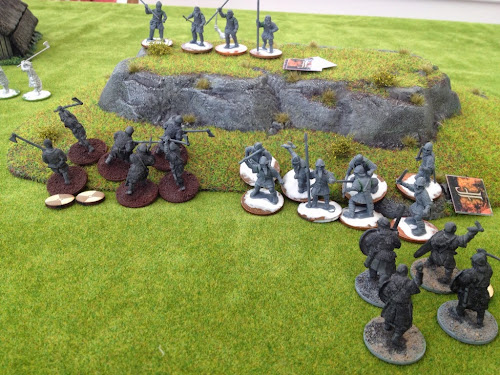 A blood bath ensued. The huscarls lost three of their number, with the survivor retreating to protect his warlord. The surviving Viking Hirdmen found themselves exhausted and were charged by the Dane axe wielding huscarls. A cloud fell over the battle-field, screams were heard, limbs flew in all directions and heads rolled. When the cries of pain were quieted a scene of complete annihilation was revealed. Not one hearthguard from either side was left alive! 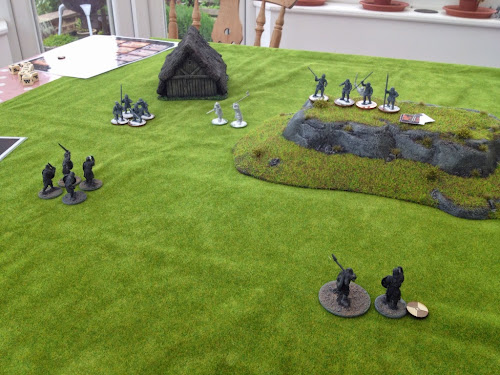 The battle remained in the balance. Facing Mighty Kyle's remaining units of Hirdmen, berserkers and (exhausted) warriors was a complete four man unit of huscarls, together with a single huscarl retainer who devoted himself as personal bodyguard to the Anglo-Dane warlord.

The berserkers were let loose and with cries of Valhalla fell upon the four man huscarl shield wall. Being hard as iron, the huscarls held their line but lost two of their number. Following in the wake of the suicidal berserkers, the Viking Hirdmen set about the two survivors. Now fatigued and depleted of dice the huscarls fought bravely and killed a Hirdman. Unfortunately the huscarl's defences wavered and they were cut down. 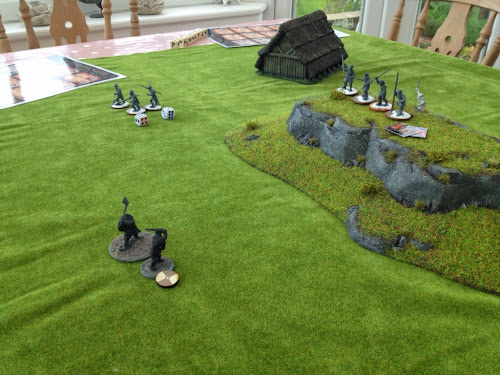 It was at about this time the Anglo-Dane warlord decided that retreat was more honourable than death and decided to review recent archaeological excavations at the Celtic Ruins. The counter was moved and we found ourselves in the last turn of the game. Could Mighty Kyle and his vicious Vikings catch the noble Anglo-Dane warlord?

Without further ado, the warlord legged it... And puffing and panting with two fatigue, he didn't quite reach the ruins. Still, his retainer stood before him and the bearded buffoons.

The Vikings still had four SAGA dice and used them all to activate the three Hirdmen. Despite stumbling, as multiple activations caused fatigue that were quickly spent to limit movement, the Hirdmen reached the retainer with a dice to spare. The Anglo-Dane huscarl's bravery cost him his life and the Vikings with great shouts of Valhalla fell upon the hapless warlord. 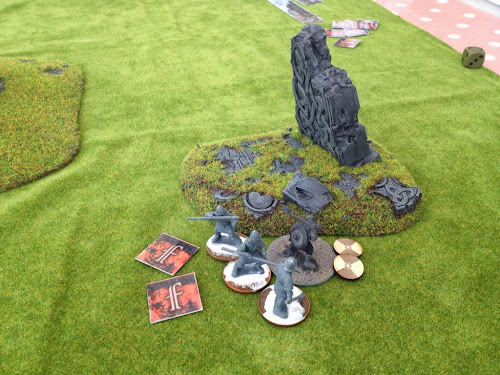 A great disturbance was felt within the force (or was that when I also lost at X-Wing) and the warlord was cut to pieces.

The Mighty Kyle with just his warlord and a bedraggled unit of four exhausted warriors was victorious... 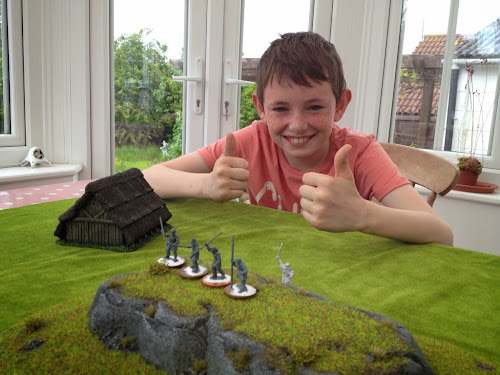 A great game and many congratulations to a worthy opponent. But mark my words, the Anglo-Danes will be back (hopefully with at least one more unit painted)...