First some bad news. My painting lamp failed this evening - sniff. It's a natural daylight lamp with a built in magnifier from HobbyCraft. I detected the unmistakable whiff of burning (!) plastic, checked the lamp and the top felt hot to the touch. Never noticed any heat from the lamp before, so I looked a bit more. The plastic near the bulb mount was melting! The light flickered and that was that. Mort. Of course I no longer have a receipt. But melting plastic? Surely a safety risk? May pop in to the local store to discuss...

You may remember I mentioned about the outstanding Egyptian diggers for my Pyramids of Mars Doctor Who scenario? I bought them at Salute and Westwind promised to post them for free. Well, they arrived today so I now have all the figures I need.

I've finished painting my first two figures for The Sontaran Experiment. Meet Field Major Styre and a servo robot that will be a proxy for the tentacled machine used in the actual show. 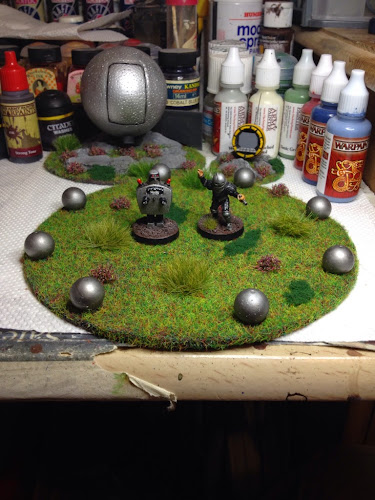 As part of my terrain push earlier this year I put together the Transmat Circle, spaceship and communication module. The spaceship is temporary, it's just a painted polystyrene ball attached to a cocktail stick. I aim to find a Christmas bauble with a mesh pattern and do a better job later in the year. 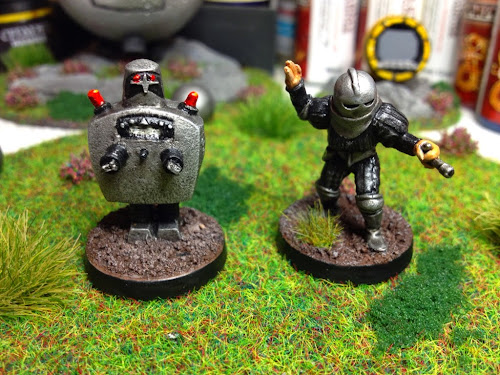 The robot is a bit basic, but will do for now. The figure appears to be based on the servo robot that appeared in The Wheel in Space.

I have the figures needed for the good guys: fourth Doctor, Sarah Jane and Harry. I struggled a while finding GalSec prisoners, but in the end settled on the ARC Moonbase Crew by Crooked Dice. They are currently on the painting table, along with a squad of Germans for Bolt Action, but will have to wait until I get my lamp replaced.